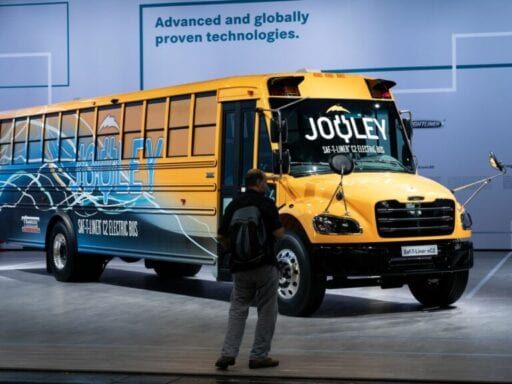 Bernie Sanders’s just-released Green New Deal plan is huge — $16 trillion, dozens of different clean energy and climate adaptation programs. But one of its more modest proposals stands out as a spectacularly good idea.

Is that an exaggeration? Only a little.

Bernie’s plan to fix school buses is good (the research on this is kind of wild). pic.twitter.com/UIFlEvjwm4

And Sanders isn’t alone. Last month, Kamala Harris introduced (with Sanders, New Jersey Senator Cory Booker, and others co-sponsoring) the Clean School Bus Act in the Senate. Rep. Jahana Hayes (D-CT) introduced it in the House. The bill would authorize up to $1 billion in spending to help districts replace their diesel school buses with electric ones.

It’s a smallish idea, but it might actually be fairly consequential. Air pollution is an enormous — and oddly overlooked — health hazard. That’s been clear for a long time, but recent research has made it even clearer.

Meta-analyses of hundreds of studies have found strong associations between even low levels of air pollution and deadly cardiorespiratory diseases. One recent study looked at the effects of diesel cars that were supposed to meet emissions guidelines — but in fact did not — and suggested that even the slight increase in air pollution from one cheating car meant more kids hospitalized and more babies born prematurely. Another study found that air pollution worsens dementia substantially. Another found that dust pollution in Africa drives a 22 percent increase in child mortality.

And while hospitalizations, life-threatening emergencies, and deaths are the most dramatic effects of air pollution, there’s a lot of evidence that the rest of us are being affected too. That’s what has driven some researchers to say there is no safe level of air pollution.

Where do the school buses come in?

About 55 percent of America’s public school students get to school on buses — and 95 percent of those buses run on diesel. Researchers have measured pollutant levels on those buses, and they’re five to 10 times higher than pollution levels elsewhere. There’s preliminary evidence that retrofitting school buses to pollute less improves kids’ test scores, and that’s hardly surprising — the effects of air pollution on brain development are well established.

Enter electric buses. As my colleague David Roberts writes, electric buses aren’t just a big boon to the environment; they’re also a great deal all around. First, because they’re so much bigger than electric cars, they can carry bigger batteries, and many options soon to be on the market have a long range — at least 200 miles, which is much farther than most school buses drive on their daily trip. Secondly, they pollute vastly less, even if the electricity is coming from coal-fueled power plants.

Until fairly recently, the battery technology wasn’t quite there for electric buses to make sense. But electric bus technology has been a hotbed of innovation in the past few years. One electric bus set a new record by driving more than 1,000 miles on a charge. The electric bus company Proterra released its patents for a fast-charging system that can completely charge a bus in 10 minutes. Volvo and Hyundai have developed electric buses. China has replaced much of its transit system with electric buses.

And their life cycle costs — the cost of the bus to the government from purchase through decommissioning — are competitive with life cycle costs for diesel buses, though the upfront costs are higher. For that reason, some cities are already switching to electric buses, though others can’t afford the high upfront costs. Under Sanders’s plan, the federal government would foot the bill for the switch.

In short, we can stop pumping health- and grade-affecting pollutants into our children’s lungs, reduce greenhouse gas emissions, and save school districts money.

And an investment like this is likely to help electric buses transition into the mainstream. Replacing our school buses with electric buses might give the industry, with all its innovations, the chance to prove itself — and then win over municipalities and private bus markets as well.

Lots of the proposals in Sanders’s Green New Deal proposal are exciting, and some of them have much greater potential than the bus proposal to fight climate change. But the bus proposal is worth paying attention to. It’ll give 24 million kids cleaner air to breathe and support the development of an emerging green technology — electric buses — that are needed the world over. The net costs to the government might be zero (thanks to the lower long-term costs of electric buses), and the net benefits to society look enormous.

Sometimes, a serious look at policy turns up some clear wins. This is one of them — and whoever becomes president, I hope it becomes policy.