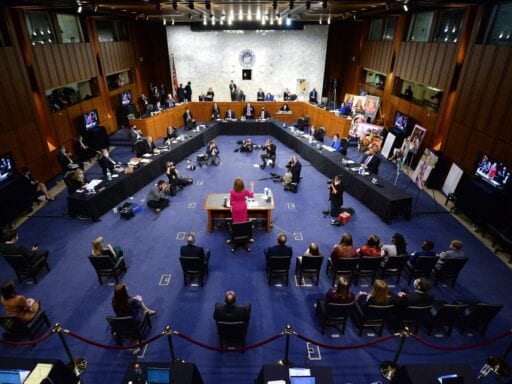 The hearing is far from business as usual — but its first day often felt like it was.

About a week and a half after two members of the Senate Judiciary Committee tested positive for the coronavirus, masked lawmakers gathered to make opening statements, with some including Sens. Thom Tillis (R-NC), Patrick Leahy (D-VT), and Kamala Harris (D-CA) appearing remotely. Sen. Mike Lee (R-UT) — one of the Republican lawmakers to be recently diagnosed with coronavirus — returned to make his statement in person after being cleared by the Capitol’s attending physician, who noted that he did not need to take an additional test (Lee has not shared whether he has recently tested negative).

But even as it proceeded without delay, the hearing was far from business as usual: It’s taking place as Republicans try to push through a nominee as quickly as they can ahead of the election, despite taking a completely different position in 2016. And it’s occurring amid concerns about coronavirus exposure at the Capitol. “This isn’t the way we should do it,” said Leahy. “We should not be holding this hearing when it’s plainly unsafe to do so.”

Little about the panel — beyond its format — spoke to how abnormal it was, however.

Instead, even as Democrats took issue with Republicans’ approach, much of the hearing proceeded as if it were ordinary, contrary to what many progressive activists hoped to see. As Democrats tried to emphasize how Barrett would threaten the Affordable Care Act if she ascends to the high court, Republicans touted her credentials as a Notre Dame law professor and misleadingly deflected concerns about her nomination as attacks on her Catholic faith.

Barrett, meanwhile, had an opportunity to make her opening statement, during which she described her interpretation of the Court’s role as a body that’s not intended to create policy — a commonly used Republican talking point. “The policy decisions and value judgments of government must be made by the political branches elected by and accountable to the people,” Barrett said. “The public should not expect courts to do so, and courts should not try.”

Democrats have said they’re aiming to sway potential Republicans on Barrett’s nomination by highlighting the stakes of this Supreme Court seat — something they did Monday by using the photos and stories of real people who could be affected by an ACA rollback. “We can’t afford to go back to those days when Americans could be denied coverage or charged exorbitant amounts,” said ranking member Dianne Feinstein, while speaking about a California constituent named Christina Monroe Garcia, who was able to obtain cataract surgery after gaining insurance coverage through the ACA.

Lawmakers including Sens. Cory Booker (D-NJ) and Harris emphasized, too, that this hearing was taking place against the backdrop of a rushed process and an ongoing stalemate over stimulus, which Republicans have not prioritized to the same degree as a judicial nominee. “Nothing about this is normal,” said Booker.

If the Affordable Care Act is overturned in an upcoming Supreme Court case, more than 20 million people could lose their health insurance and roughly 100 million people with preexisting conditions could once again be discriminated against by insurance providers. Democrats sought to make this possible fallout clear via their statements. If Barrett is confirmed, one of the first cases she could rule on could determine whether the ACA is able to stand.

One after another, Democrats named constituents in their home states, including Connor, a 10-year-old in Connecticut with muscular dystrophy, who has been able to access the treatments he needs as a result of the ACA’s protections for individuals with preexisting conditions. “It has protected Connor from losing insurance because of this insidious disease that he never caused,” said Sen. Richard Blumenthal (D-CT).

Democrats are focusing on the ACA as their chief message both because of the need to defend the policy and because they have public opinion on their side. According to a late September survey from Morning Consult, 62 percent of voters support the Affordable Care Act, and 79 percent of voters back health insurance protections for people with preexisting conditions.

Sen. Amy Klobuchar (D-MN) in her remarks also spoke about her personal experiences with Covid-19, which both her husband and her father were diagnosed with, and urged voters to call Republican senators regarding their concerns about the Supreme Court nomination. “This isn’t Donald Trump’s country. It is yours. This shouldn’t be Donald Trump’s judge. It should be yours,” she said.

As Vox’s Ian Millhiser has written, Barrett has previously criticized Supreme Court decisions to uphold the ACA including Justice John Roberts’s reasoning for doing so in NFIB v. Sebelius in 2012. “Chief Justice Roberts pushed the Affordable Care Act beyond its plausible meaning to save the statute,” Barrett has written.

Republicans also returned to the same themes repeatedly throughout the hearing, highlighting Barrett’s professional qualifications for the role including her tenure as a clerk for Supreme Court Justice Antonin Scalia (who died in 2016), and her work as a law professor at Notre Dame University, while frequently referencing her family as well. If confirmed, Barrett — a parent of seven — would be the first mother of school-age children to sit on the high court.

“Her students ‘express awe with the power of judge Barrett’s intellect and with her professionalism,’” said Sen. Chuck Grassley (R-IA). “To sum up, Judge Barrett’s qualification and character are impeccable.”

Republicans also repeatedly and misleadingly suggested that opposition to Barrett was driven by concerns with her religion, which Democratic lawmakers broadly did not mention. “They are attacking you as a mom and a woman of faith because they cannot attack your qualifications,” said Sen. Joni Ernst (R-IA), even though neither of these issues was raised.

Republicans took this approach because religion was a central issue during Barrett’s circuit court confirmation in 2017, when comments made by Feinstein at the time seemed to suggest that Democrats were scrutinizing Barrett’s religion and not its relationship with her potential work as a judge. At the time, Feinstein noted that the “dogma lives loudly within you,” a statement that Republicans have pointed toward as anti-Catholic sentiment.

“This committee isn’t in the business of deciding whether the dogma lives too loudly in someone,” said Sen. Ben Sasse (R-NE). Barrett has previously written about how her faith relates to potential judicial decision-making about capital punishment, and Harvard law professor Mark Tushnet is among those who have argued that it’s fair game to ask Barrett about these writings, without perpetuating anti-Catholic sentiment.

Senators will have ample time on Tuesday and Wednesday to question Barrett directly about her stances on a wide range of issues, though whether this upcoming session will affect a vote on her nomination is an open question.

Republicans have a 53-47 majority in the upper chamber, meaning four lawmakers would have to defect from the party line in order for Barrett’s nomination to fail — since Vice President Mike Pence can break a 50-50 tie. It’s an unlikely scenario, but trying to convince a handful of their GOP colleagues to vote against the nomination will be a key aim of Democrats’ arguments in the hearing this week.

Why Washington, DC, isn’t a state
“Now is the time to act”: John Lewis calls for Trump’s impeachment
Trump says US Covid-19 deaths would be low if you excluded blue states. That’s wrong.
States that Trump won easily in 2016 are looking tight for him in November
Trump’s fake news crisis, illustrated by two episodes over the last 24 hours
Jehovah's Witnesses are banned in Russia. That doesn't stop them from worshipping.