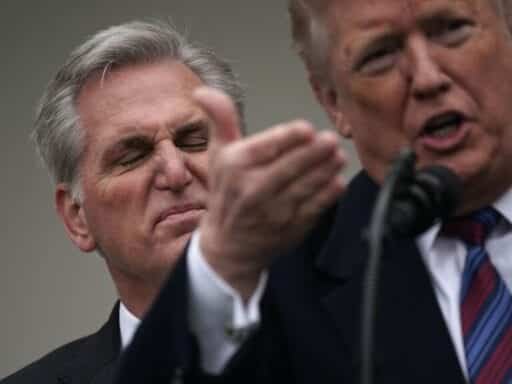 Kevin McCarthy wants you to believe Trump was joking when he called for foreign help. He wasn’t.

During a speech in July 2018, President Donald Trump advised his supporters to “just remember — what you’re seeing and what you’re reading is not what’s happening.” Republicans are now putting that credo in action while defending comments made last week encouraging Ukraine and China to investigate one of his political rivals.

Trump asked for help from Ukraine and China during a media availability last Thursday. Despite what Republicans would now have you believe, he was not clearly not joking around.

“They should investigate the Bidens,” Trump deadpanned, referring to the Ukrainian government. “Likewise, China should start an investigation into the Bidens.”

REPORTER: What exactly did you hope the Ukrainian president would do about the Bidens?

TRUMP: “I would think that if they were honest about it, they’d start a major investigation … they should investigate the Bidens … China likewise should start an investigation.” pic.twitter.com/gLVBjmSs3q

Trump’s comments seemed to be a textbook case of soliciting a foreign campaign contribution and added fuel to calls for his impeachment. They made an abuse of power scandal pertaining to his efforts to enlist foreign governments to do opposition research for him even worse. In short, they are hard to defend.

But that doesn’t mean Trump’s Republican supporters in Congress aren’t trying. Notably, however, they’re trying to rewrite history instead of defending the president on the merits.

On Sunday and Monday, a number of Republican members of Congress — including House Minority Leader Kevin McCarthy (R-CA), Rep. Jim Jordan (R-OH), and Sen. Roy Blunt (R-MO) — went on TV and insisted either that Trump was just joking when he called for China and Ukraine to investigate the Bidens, or, in McCarthy’s case, that it never even happened.

“You watch what the president said — he’s not saying China should investigate,” McCarthy said on Monday morning’s Fox & Friends, in a comment at odds with reality that received no pushback from hosts.

Asked what he thought about Trump asking China to investigate the Bidens, @GOPLeader McCarthy gaslights: “You watch what the president said — he’s not saying China should investigate,” he says. pic.twitter.com/BWIQ9Pq7Nv

McCarthy’s talking point was especially egregious, but other GOP Trump defenders similarly asked people to disbelieve what they saw with their own eyes last Thursday.

“I doubt the China comment was serious. … He loves to bait the press,” Blunt said on Face the Nation.

MARGARET BRENNAN: Are you comfortable with the president calling for Ukraine and China to investigate his political opponent?

Sen @RoyBlunt: “I doubt the China comment was serious … he loves to bait the press.”

(Trump’s comment was 100% serious and Blunt is gaslighting.) pic.twitter.com/VZ2WZPbKFD

“George, do you really think he was serious about thinking that China is going to investigate the Biden family?” Jordan said, rhetorically, to This Week host George Stephanopoulos, echoing comments Sen. Marco Rubio (R-FL) made last week.

This type of defense of Trump isn’t unprecedented — it echoes how Trump himself retconned his “Russia, if you’re listening” call for Russian hackers to obtain Hillary Clinton’s emails during the last news conference he would have during the 2016 campaign. But it’s especially egregious in this instance because even Trump has acknowledged he wasn’t kidding around.

When Trump defenders weren’t trying to rewrite history, they were desperately deflecting.

Perhaps the most viral Sunday show moment came when Meet the Press host Chuck Todd — who has raised eyebrows with his increasingly outspoken criticisms of Trump in recent days — got fed up with Sen. Ron Johnson (R-WI) after Johnson refused to stop deflecting from questions about Trump’s behavior by pushing debunked conspiracy theories about the FBI.

“I have no idea why a Fox News conspiracy, propaganda stuff is popping up on here,” Todd said, as Johnson talked over him, before raising his voice. “Senator Johnson, please! Can we please answer the question that I asked you, instead of trying to make Donald Trump feel better here that you’re not criticizing him.”

WATCH: @SenRonJohnson is asked why he winced & brings up a “conspiracy theory.”@chucktodd: “I have no idea why we’re going here. … Can we please answer the question I asked you instead of trying to make Donald Trump feel better here that you’re not criticizing him?” #MTP pic.twitter.com/41i7WPHQlF

Johnson wasn’t the only Republican member of Congress who went to painstaking lengths to avoid criticizing Trump. On Fox News Sunday, Rep. Chris Stewart (R-UT) wouldn’t even offer token pushback to a tweet Trump posted on Saturday calling a Republican senator from his state, Mitt Romney, a “pompous ‘ass,’” simply because Romney called Trump’s conduct with regard to the Bidens “wrong and appalling.”

“I’m shocked you’d ask me this question. Look I know the media loves for Republicans to criticize each other,” Stewart began, prompting host Chris Wallace to jump in and point out that “it’s the president who called Mitt Romney a pompous ass!”

“I’m just gonna say, you know what, Mitt Romney’s a big boy, President Trump’s a big boy — they can settle their differences, I’m not going to weigh in on that,” Stewart said, before changing the topic.

CHRIS WALLACE: Do you have any problems with the president calling Mitt Romney a “pompous ass”?

.@RepChrisStewart: “I’m shocked you’d ask me this. I know the media loves for Republicans to criticize–“

CW: The president called him an ass!

Tellingly and somewhat unusually, no White House officials went on the Sunday shows to defend Trump. But perhaps even more telling was the weakness of the arguments used by those who did.

Trump could help solve the mask problem. Instead he’s making baseless attacks on New York nurses.
Here are the 9 most interesting conversations I had in 2020
Why so many people who need the government hate it
White House makes increasingly disastrous attempts to spin the shutdown
America’s deeply unequal economic recovery, explained in 7 charts
The governor of Kentucky just pardoned a man convicted of abusing his 6-year-old stepdaughter