The techlash hasn’t come up in the Democratic presidential debates. Warren could change that. 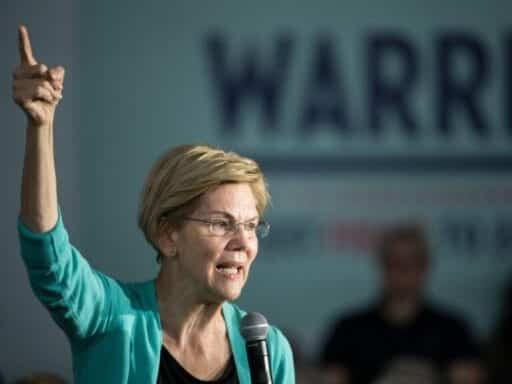 Tonight’s debate will signal whether Warren thinks Facebook — and the rest of tech — may finally be an issue voters care about.

For the past few years there has been a loud and contentious debate about the need to reform and regulate Silicon Valley. But it hasn’t come up during the three Democratic presidential debates this year: Aside from a quick aside about American workers’ jobs, the subject of technology has been almost entirely absent from the debate stages.

That’s because Sen. Elizabeth Warren, who has been a consistent critic of big consumer tech companies for months but hasn’t made them a focus of her campaign, has spent the last couple weeks going directly at Facebook.

And if she’s not ready to start talking about her plans to reform and/or breakup the big tech companies in Westerville, Ohio on Tuesday, then maybe we should conclude that none of the Democrats running for President think American voters really care about this stuff. Republicans already seem to think it works for them: Donald Trump loves using Twitter and his campaign spends heavily on Facebook, but he and his party spend a lot of time complaining that Big Tech is out to get them.

To recap: Warren has criticized Facebook, along with Amazon and Google, on antitrust grounds for years. But she hasn’t spent much time focused on the tech companies during her campaign this year.

Things changed on Oct. 1, when The Verge published comments from an internal Facebook meeting during which CEO Mark Zuckerberg said it would “suck for us” if Warren was elected and pursued an antitrust case against the company, describing it as an “existential” problem. Since then Warren has aimed directly at Facebook — often using Twitter to do so:

What would really “suck” is if we don’t fix a corrupt system that lets giant companies like Facebook engage in illegal anticompetitive practices, stomp on consumer privacy rights, and repeatedly fumble their responsibility to protect our democracy. https://t.co/rI0v55KKAi

Warren has ratcheted up her attacks since then. A week ago and without offering evidence, she accused Zuckerberg of making a backroom deal with Donald Trump that led to a Facebook decision to let politicians run misleading ads on the platform. Then her campaign tried to illustrate her charge by running a (sort-of) deliberately misleading ad on Facebook, then tweeting about Facebook’s approval:

We intentionally made a Facebook ad with false claims and submitted it to Facebook’s ad platform to see if it’d be approved. It got approved quickly and the ad is now running on Facebook. Take a look: pic.twitter.com/7NQyThWHgO

The debate about Facebook’s responsibility when it comes to paid political speech — and whether Facebook thinks it should be regulated by the same rules the Federal Communications Commission uses to oversee broadcast TV stations — could be a nuanced and interesting one if it comes up onstage on Tuesday.

But the hunch here is that Warren doesn’t want to spend a lot of her time talking about FCC election regulations. I’m guessing that what she really wants to do is use Facebook as a proxy for what she thinks is a general distaste voters have for giant tech companies — especially companies voters may already blame for helping to elect Trump in 2016.

You could also argue that Warren has been laying into Facebook in the run-up to Tuesday’s debate simply because of the news cycle — if The Verge had surfaced those comments about her six months ago, she would have jumped on them back then. Ditto for Facebook’s decision to allow misleading ads like the one the Trump campaign has aimed at Joe Biden.

And Warren’s plan to break up Facebook and other big tech companies o, indeed, one of her many, many plans. (Here we should point out that Warren, like all of the Democratic candidates, spends a lot on Facebook ads — but nothing close to what Trump is spending).

But if Warren thinks her anti-Facebook campaign has real traction — and that the techlash isn’t simply something that only concerns tech workers in Silicon Valley, politicians in Washington, and the national media — then this is the time to test that theory.

And if she does, then Zuckerberg and his fellow moguls may really have to start worrying. Republicans from Donald Trump on down have been happy to bash tech companies for the past year, primarily over charges (without real evidence) that tech companies are censoring conservatives. If Warren and/or her fellow Democrats are willing to join in, it may not matter that both sides are mad at tech for different reasons. Big Tech would still be in for a very long fight.

How the media should respond to Trump’s lies: State of the Union edition
The Saudi crown prince reportedly hacked Jeff Bezos
In memoriam: The brands we lost in the 2010s
Kellyanne and Claudia Conway’s very complicated, very public relationship, explained
Trump has finally been tested for coronavirus. Now we await the result.
Ayanna Pressley wins Massachusetts congressional primary in a suprise upset