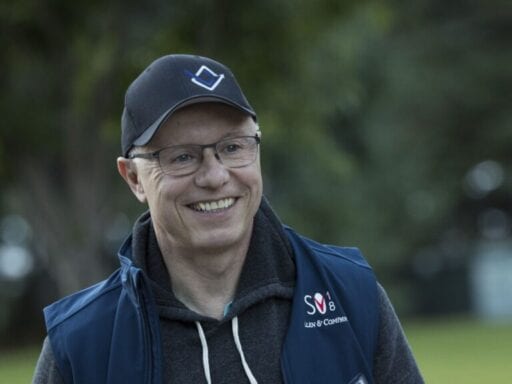 Doug Leone and his wife have donated $400,000 to boost Trump. | Drew Angerer/Getty Images

Doug Leone, who has backed both TikTok and Trump, could be the bridge between the two.

The ultimate fate of TikTok could be shaped in part by the efforts of one billionaire tech investor who has earned the distinction of being a particularly rare type of Silicon Valley unicorn: a major donor to Donald Trump.

ByteDance, the Chinese parent company of the hit video sharing app, is in a boxing match with the Trump administration, which has threatened to ban it from the United States next month. But TikTok has an investor who looms large in the drama because of his personal ties and access to the White House.

Doug Leone, one of the leaders of one of Silicon Valley’s most celebrated firms, Sequoia Capital, and his wife together have given about $400,000 over the last two years to Trump’s campaign and affiliated groups such as the Republican National Committee and a pro-Trump super PAC. That makes the Leones two of the very biggest donors to Trump in Silicon Valley, where business leaders have almost entirely run away from publicly backing the President.

Now, the links between Leone and Trump may shape the ending of one of the most complex business and geopolitical stories of 2020. Leone has told “people he could use his influence with Trump to help the company,” the Washington Post reported this weekend. Leone planned to reach out to Steven Mnuchin and Jared Kushner, two top Trump aides who have both been integral to Trump fundraising efforts, “to see what it would take to save TikTok,” the Wall Street Journal added.

The stories show how cultivating ties with the White House can pay dividends, even if the donations were not born from a premeditated lobbying push.

TikTok and Microsoft — the company that is seeking to purchase it and circumvent a threatened ban of the app — both have built-out Washington operations with professionals that twist arms for a living. After all, Microsoft CEO Satya Nadella spoke with Trump directly about the potential deal. But one hallmark of Trump’s Washington has been that convincing the administration to take a certain action can be a highly irregular process, driven by personal relationships and access to Trump advisers, both formal and informal. Plus, Trump has displayed a well-documented obsession with whether someone has shown loyalty to his “team” or not.

Leone, a longtime Republican, reportedly has that access. And while Trump might not know Leone well enough to pick him out of a lineup, suffice it to say that not every Silicon Valley venture capitalist can jawbone the Secretary of the Treasury or the president’s son-in-law to help a portfolio company.

It’s still unclear whether Leone’s outreach has actually accomplished anything. And there’s no evidence that Leone only gets an audience because of a few hundred thousand bucks in donations. To be sure, Sequoia’s global managing partner is a prominent business leader in his own right. Precisely why someone gets a call returned — Is it the donations? His stature? A little bit of both? — is impossible to know.

Leone is an exception in tech. The liberal tech industry has been fighting with Trump since his first day on issues like immigration. In fact, Leone’s co-leader at Sequoia for a long time, Michael Moritz, this cycle has given millions to boost Democrats. Silicon Valley has made supporting Trump something of a scarlet letter, so much so that even the few leaders who do back him now feel pressure to do so quietly. That’s what makes Leone’s public donations unusual, especially in the image-conscious world of venture capital.

When Recode wrote last year about the Leones’ gifts to Trump — then measuring only about $100,000 — some leading voices in tech spoke to the liability that the donations could pose to Sequoia, even though it is generally regarded as the highest-performing investing firm in Silicon Valley.

Swati Mylavarapu, a former venture capitalist who is now a top Silicon Valley Democratic fundraiser, put it this way on Sunday:

Hi every entrepreneur who wants to raise money from Sequoia.

You get to make a choice.

Do your investors reflect your and your company’s values? https://t.co/0POQLyx6oV

That liability remains very real. But what the news over the weekend makes clear is that there is an upside — less-obvious, to be sure — that complements it. One of Sequoia’s most lucrative investments is in ByteDance, with Sequoia’s stake said to be worth as much as $15 billion. And while the gifts from Leone have been made in a personal capacity and officially have nothing to do with Sequoia, his firm could benefit from the personal donations if they help maintain the value of TikTok.

The few other Silicon Valley marquee names who have supported Trump have reaped some rewards. Peter Thiel, who braved significant blowback to give over $1 million to boost Trump during his 2016 run, has stocked the administration with his allies and former aides. Larry Ellison, who hosted a fundraiser that brought $7 million to Trump’s coffers earlier this year, has pressed Trump to publicly push hydroxychloroquine, an experimental drug treatment for the coronavirus that Ellison favors.

Leone is a much lower-profile billionaire than those two titans. Some Trump fundraisers outside of Silicon Valley say they haven’t even heard of him.

But with this much money on the line — and this much international intrigue at play — having him on TikTok’s side can only help.