The tricky etiquette of giving a book as a gift 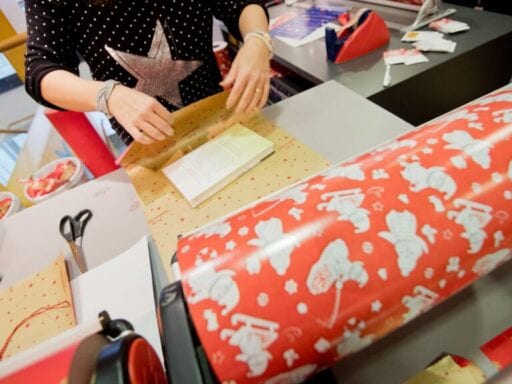 Share
Loading...
A bookseller packs books as Christmas presents in a branch of the German bookseller Hugendubel in Lower Saxony, Hannover, on December 12, 2018. | Photo by Julian Stratenschulte/picture alliance via Getty Images

Welcome to Vox’s weekly book link roundup, a curated selection of the internet’s best writing on books and related subjects. Here’s the best the web has to offer for the week of December 15, 2019.

If a novelist had submitted a story to my publishing company about someone losing £40,000 one day and then regaining it the next, thanks to the beautiful kindness of thousands of strangers, I would have thought that it sounded unlikely. If that novelist had also set the story just before Christmas, included scenes where one of the protagonists starts weeping during a phone call and brought events to a neat conclusion almost exactly 24 hours after they started … well, I guess I’d say it isn’t exactly the kind of thing that Galley Beggar Press likes to publish. But it is exactly what has happened to me and my co-director Eloise Millar.

Looking back at this culture-shifting review, we might wonder whether such a moment can be replicated in our modern literary and journalistic landscape. The persuasive power of an individual review today is vastly diluted by the fragmentation of the media and the frantic chirping of cable channels, Facebook posts, Twitter feeds and text messaging at all hours. Abbreviated attention moves on at an almost mindless speed. A trend rises and vanishes, all but forgotten before it ever sticks. A book and a book review — even if capturing a cultural turning point — today can’t help losing the competition for eyes to Twitter bursts and viral videos. One might wonder what social transitions are never noticed these days in all the noise.

I asked some of the authors whose books had been associated with Jenner why they thought the public is so fascinated by images of celebrities reading. Why are they simultaneously so glamorous, jarring and compelling?

… Written in the droll style that mirrors her popular Twitter account, Broder’s response was, simply, “We are looking for God.”

“We have a certain degree of expertise and knowledge about both content and approach that makes it a particularly informed, high-level discussion,” Greenberg said. Critiquing a chapter of a forthcoming Judah Benjamin biography by James Traub, another member of the group, “We got in a big discussion about slavery and Benjamin’s slave-owning, and it led someone to encourage him to draw a more detailed portrait of slavery in New Orleans, where Benjamin lived.” One of the members also recommended a recent academic book that helped Traub’s research on the topic.

This is not a list of the best books of the decade. (This is, if you’re interested.) This is a list of books that, whether bad or good, were in one way or another defining for the last decade in American culture. (A global list would be nearly impossible, for obvious reasons. Accordingly, I’ve hewed to English-language and/or US publication dates, when relevant.) This is a list for general readers and followers of literary culture; it includes both major bestsellers and literary standouts, books that have become pop culture phenomenons, and books whose influence has been quieter and/or localized in literary circles. Obviously, it would not suffice for specialist purposes—I imagine a scientist would have selected a very different list of 100 books.

If Franzen shot the starter pistol of the fiction of the aughts with The Corrections, Freedom would come to look like a bookend. Goodbye to all that. Five years after Freedom, Franzen’s next novel, Purity, sold only about a quarter as many copies. Where once a passel of middle-ish-aged men — Jeffrey Eugenides, Michael Chabon, the rest of the Jonathans (Lethem, Safran Foer) — dominated the scene with their big, important distillations of the world, the voices that now stand out, the ones that drive the conversation around fiction, largely belong to women.

Their work is a panoply of technical precision, formal inventiveness, drilled-down particularity, grave-deep emotion, and whatever the hell else women feel moved to write about. It’s a collection only in the sense that the 2010s were an era. Mostly it’s marked by a refusal to cater to any one notion of what makes a classic. That, and the fact that we paid it loads of money and attention.

During the tender youth of international copyright law, the wildly popular Dickens was constantly trying to get ahead of unscrupulous publishers, on both sides of the Atlantic. When Lee and Haddock’s London twopenny weekly, Parley’s Illuminated Library, published a pirated version of A Christmas Carol under the byline of Hewitt, Dickens had had enough. He sued. When he eventually won in court, he wrote in celebration: “[T]he pirates are beaten flat. They are bruised, bloody, battered, smashed, squelched, and utterly undone.”

Krueger and Barnard removed the scroll from its moist chamber and placed it on top of a pane of borosilicate glass. One turn at a time, using bamboo spatulas, they unfurled the birch bark, placing small glass weights on newly flat sections. Each fresh turn revealed new fragments, which the conservators weighed down to preserve their place in the text. If the scroll seemed on the verge of cracking, a conservator would mist the air with a preservation pencil.

As a book publishing phenomenon, young adult literature entered the decade like a lion. At the beginning of the 2010s, a generation that had grown up obsessed with Harry Potter and other middle-grade fantasy series decided it wasn’t that interested in adult literary fiction, with its often lackadaisical plotting and downbeat endings. YA stood ready to supply them with plenty of action, cliffhangers, supernatural beings, mustache-twirling bad guys, and true love. But now, at decade’s end, YA seems to be eating itself alive.

At least part of the satisfaction of giving books lies in at best signalling your own taste, and at worst imposing it. If you are not giving a book you loved so that the recipient can agree with you about its brilliance, you are attempting to demonstrate your mastery of the brief, pinpointing the title that will delight them most, that they don’t already own. But good etiquette is to “choose for the recipient, rather than what you think they should read,” says Dave Kelly of Blackwells.

Lockdown protests, Congress nears another stimulus deal: Monday’s coronavirus news
Laurene Powell Jobs’s charity is going to give away almost all of its money
Trump renews Space Force plan, but Congress lukewarm on plan it would have to approve
Kyrgyzstan’s political crisis, explained
April 1 is Census Day. Here’s what that means.
The Trump administration will start sending migrants back to Guatemala under a new rule