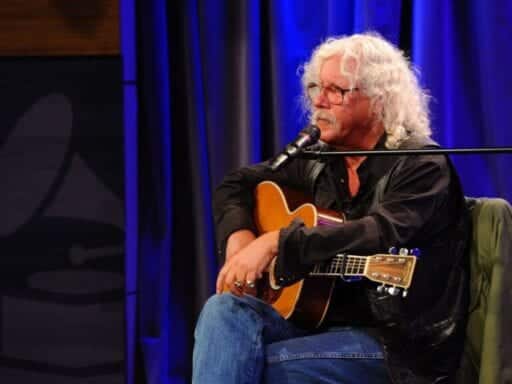 With four-part harmony and feeling.

Thanksgiving is here: a time for family, friends, gravy, and Arlo Guthrie talk-singing his way through an 18-minute-long anti-war song about littering. A natural fit, no?

That’s what various rock radio stations around the country seem to have concluded, because most major cities in America now have at least one station that makes a point of playing Guthrie’s “Alice’s Restaurant” every Thanksgiving. In my own hometown of Philadelphia, WXPN’s Helen Leicht plays it every year at noon, and my family gathers around the radio like we’re in an old-timey Norman Rockwell painting, ripping apart bread for the stuffing and singing, “Had a Thanksgiving dinner that COULDN’T BE BEAT!”

Guthrie’s “Alice’s Restaurant” was originally released in 1967 as “Alice’s Restaurant Massacree,” and it’s only nominally about either Thanksgiving, Alice, or her restaurant. It’s a shaggy, rambling story-song, in which Guthrie spends Thanksgiving (with a dinner that couldn’t be beat!) with Alice (of the restaurant), and then as a favor tries to drive her trash out to the dump, only to find that the dump is closed for Thanksgiving. So he dumps the trash in a garbage pile by the side of the road and is subsequently arrested for littering — which, when Guthrie comes before the draft board, is the reason the military cites for choosing not to draft him.

“You want to know if I’m moral enough join the army, burn women / Kids, houses, and villages after being a litterbug,” drawls Guthrie, to which the sergeant replies, “Kid, we don’t like your kind.”

In Guthrie’s deadpan delivery, the whole story has a loopy, fever-dream quality, but most of what happens in it is true. Guthrie’s littering made the local paper that fateful Thanksgiving of 1965, with Police Chief William J. Obanhein (the Officer Obie of the song) remarking sternly that he hoped the case would serve “as an example to others who are careless about the disposal of rubbish.”

And Guthrie was, in fact, disqualified from the draft because of his arrest record. “I just couldn’t believe it,” he told NPR in 2005. “And so I turned it into a song. It took about a year to put together, and I’ve been telling it ever since just about.”

The song that Guthrie put together and has continued singing ever since is a kind of scathing ode to bureaucratic idiocy, to a system that so prizes conformity that it treats littering as a scandalous sin even as it celebrates military violence. And at the end, it becomes a protest song.

“The only reason I’m / Singing you this song now is ‘cause you may know somebody in a similar / Situation, or you may be in a similar situation,” Guthrie explains. “And if you’re in a / Situation like that there’s only one thing you can do and that’s walk into / The shrink wherever you are, just walk in say, ‘Shrink, You can get / Anything you want, at Alice’s restaurant.’ And walk out.”

“Alice’s Restaurant” had its radio premiere in February of 1967 on New York City’s WBAI-FM, in a live performance, and it almost immediately became a runaway hit. Guthrie released a recording of another live performance in October of that year — the recording that radio stations play now — and that’s when the song started to become a Thanksgiving institution.

“It’s celebrating idiocy you might say,” Guthrie said in 2005. “I mean, thank God that the people that run this world are not smart enough to keep running it forever.”

A sentiment that is particularly comforting this year. Happy Thanksgiving.

Odd Job: What’s it like to be a real-life Disney princess?
Why Kavanaugh’s accusers can’t remember everything
Kellyanne Conway’s alleged 2018 assault, explained
Why organizers are fighting to center black trans lives right now
These protests feel different because they’re shifting public opinion
The US needs a lot more hospital beds to prepare for a spike in coronavirus cases