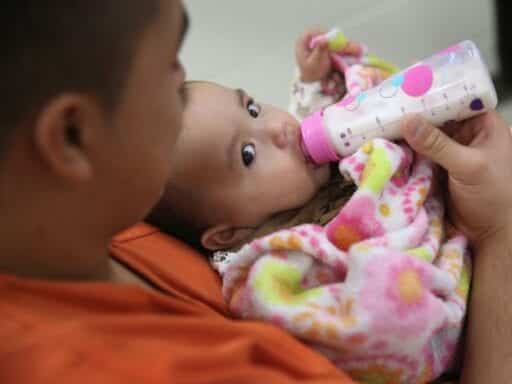 The law says the government can’t detain migrant families for more than 20 days. But Trump’s team is trying to strong-arm a federal judge into changing that.

That appears to be why it made the move.

On a press call Wednesday, Gene Hamilton, a senior official at the Department of Justice, acknowledged that as it stands right now, the Department of Homeland Security “cannot detain children who came with their parents for more than 20 days.” But Trump has signed an executive order that opens the door to doing just that.

The order would allow the DHS to keep families together in immigration detention, rather than splitting them apart when parents are prosecuted for illegal entry, for as long as it takes to resolve the case — with no acknowledgment of the 20-day limit.

Hamilton says it’s up to the other two branches of government to resolve the conflict. Either Dolly Gee, the federal judge overseeing the Flores settlement, the court decision that led to the 20-day rule, will accede to the DOJ’s demand to change the rules to allow them to detain children with their parents for as long as necessary. Or Congress will pass a law that overrides the Flores settlement entirely.

If either of those things happen, the Trump administration will actually get the legal authority to do what Trump’s executive order just demanded.

If neither of them happen … well, Hamilton didn’t appear to consider that an option.

The Trump administration isn’t saying it plans to violate the Flores settlement. But it’s not saying it isn’t.

Hamilton did not explicitly say on Wednesday’s call that the Trump administration planned to violate the Flores settlement by keeping families in detention for more than 20 days.

But he definitely didn’t indicate that the administration had any plans to do anything else.

The Trump administration (or at least Hamilton) seems to think that the upshot of all this is to put pressure on Gee herself. “Judge Gee will have a decision to make as to whether the administration can detain alien families together,” Hamilton said — implying that if she decides they can’t, it will be her fault if the administration starts separating families again.

But they’re also trying to put pressure on Congress to pass legislation that will make the request moot by granting the administration permanent legal authority to put children in immigration detention.

Hamilton praised the two bills the House is taking up this week, both of which (as part of much broader overhauls of immigration law) would override the Flores settlement and give the government permission to detain families. Those bills are considered dead on arrival in the Senate, which has little appetite to pass anything on immigration this year. Hamilton considers that unacceptable: “Congress needs to provide a permanent fix to this situation, and it can do so immediately.”

The only crisis here is the one the Trump administration created

This is really a political argument from the administration, rather than a policy argument. It’s saying that if the Flores settlement is allowed to stand, it won’t be Trump’s fault if families start getting separated again — it will be the fault of the judiciary or Congress for not recognizing the urgency of the situation and the necessity of family detention.

“This is another example of the president trying to take action to address the massive illegality at our southwest border,” Hamilton said.

The problem is that the “massive illegality” isn’t exactly more massive than usual. The Trump administration presents the current number of families coming into the US as a “surge” by comparing them to anomalously low 2017 rates — but 2018 looks pretty similar to the several years before 2017.

That means that there isn’t a bigger problem of “illegality” than there was when Judge Gee issued her ruling in 2015 that children couldn’t be kept in detention, even with their parents, for more than 20 days.

So is the Trump administration saying that this is a crisis that requires action immediate enough to compel Gee or Congress to go along? Gee isn’t up for reelection in this or any November, so public opinion (theoretically) doesn’t matter to her. Much of Congress is up for reelection in November, which makes them very wary of passing bills on controversial subjects.

If the administration’s pressure play doesn’t work — if neither the judiciary nor the legislature creates a Flores carveout for families — will the administration start separating families again? Will it start releasing families — an option it clearly finds more unacceptable than the mass opprobrium it caught for separating them? Or will it just keep detaining families for more than 20 days, and dare someone to take them to court for a flagrant violation of the law?

We don’t know. And we don’t know that the Trump administration even considers this a possibility.

Trump’s supposedly spending Labor Day weekend “studying” federal worker pay after freezing it
CRISPR has ignited a gene-editing revolution. These Nobel-winning women scientists were the spark.
More men are dying from coronavirus than women. Why?
American Truck Simulator is the perfect way to hit the great, virtual outdoors
Jennifer Lopez performed the Grammys’ Motown tribute. Motown fans were not pleased.
Congress failed to do something on immigration — again. Here’s why.