The Trump administration is dramatically restricting who can seek asylum 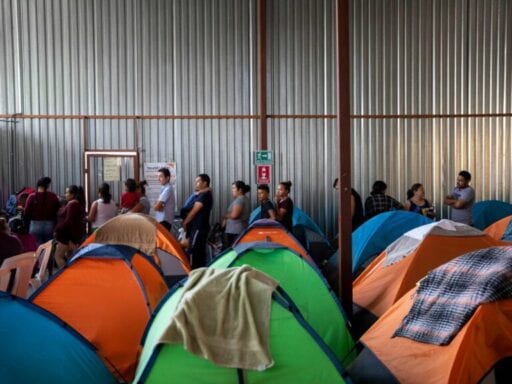 The new regulation will force those traveling to the US southern border to seek asylum protections in another country first, though the rule is likely to be quickly challenged in court.

The Trump administration plans to implement a sweeping new rule that would severely limit migrants’ ability to seek asylum in the United States, including those fleeing from Central America.

The new policy, which would go into effect Tuesday, would bar people from requesting asylum protections in the United States if they did not first seek asylum in a country they passed through — a “third country” — before reaching the US.

For those crossing the US southern border, this would, with few exceptions, make it extraordinarily difficult for anyone not coming from Mexico or on a plane to be eligible for asylum in the US. Migrants who meet a higher standard of proof that they would be persecuted in their home countries would still be eligible for “withholding of removal,” which means they would not immediately be sent back to their home countries, but doesn’t provide the full benefits of asylum status and is harder to obtain.

This new regulation would directly affect the tens of thousands of families fleeing to the US from the Central American countries of Guatemala, El Salvador, and Honduras, who largely account for the spike in crossings at the southern border this year. But, more significantly, it would dramatically transform the asylum process in the US, preventing asylum claims except from individuals who can show they applied and were denied protections in at least one country they traveled through, or if someone was a victim of human trafficking.

“It effectively ends asylum for anyone applying at the southern border who’s not Mexican and hasn’t been denied an asylum application,” Sarah Pierce, a policy analyst at the Migration Policy Institute, told Vox.

This rule is expected to be swiftly challenged in court, as have previous Trump administration actions attempting to curtail asylum claims in the United States. The ACLU has already said the new rule is “patently unlawful” and it will “swiftly sue.”

Lee Gelernt, the deputy director of the Immigrants’ Rights Project of the American Civil Liberties Union, told Vox that US immigration law has already said passing through another country as an asylum seeker doesn’t make someone ineligible for asylum in the US, unless the US has a formal agreement (what’s often known as a “safe third country” agreement) and that country has an effective asylum process.

“That effectively renders superfluous Congress’ decision to only make an exception where there’s a formal agreement with another country, to specifically provide a safe and effective asylum process,” Gelernt said.

Experts said it looks as though it violates the spirit of US immigration and refugee law, though it will likely be a bit more complicated once it reaches the courts because some migrants would still be eligible for lesser protections than asylum, which would prevent them from being sent back to the countries they are fleeing.

To get asylum, asylum seekers have to establish they have a “credible” fear they will be persecuted if they return to their home countries. (Withholding of removal requires an even higher bar, “reasonable fear.”) But many of the countries along the route migrants take to the US border are beset with problems of violence, corruption, and poverty — making it difficult to see how asylum seekers would find adequate protection there.

“It’s fucked up,” one anonymous DHS official told BuzzFeed News. “There’s a reason people apply for asylum in the US — we have a robust asylum system. Other countries on the route to the southern border don’t.”

“The United States is a generous country but is being completely overwhelmed by the burden associated with apprehending and processing hundreds of thousands of aliens along the southern border,” Attorney General Bill Barr said in a statement. “This rule will decrease forum shopping by economic migrants and those who seek to exploit our asylum system to obtain entry into the United States — while ensuring no one is removed from the United States who is more likely than not to be tortured or persecuted on account of a protective ground.”

Department of Homeland Security acting Secretary Kevin McAleenan said the step was necessary “until Congress can act.” The Trump administration has argued that many of those crossing the southern border aren’t eligible for asylum and are overburdening the system. The number of unauthorized people crossing the US-Mexico border is still well below the peaks of the 2000s, though there is a record increase in the number of families with children who are attempting the journey.

Either way, this new rule will be the latest intense battle over the administration’s immigration policies. The administration is under pressure for its current “Remain in Mexico” policy, which forces asylum seekers to wait for their cases to be heard across the border in Mexico, often in questionable conditions, rather than entering the US.

The White House has also faced scrutiny for attempts to sign “safe third country” agreements with both Mexico and Guatemala, which would allow the US to send migrants seeking asylum back to those countries without having to hear their asylum claims at all.

The Trump administration announced this latest rule after plans to ink such a deal with Guatemala got sidelined amid challenges in that country, and Guatemalan President Jimmy Morales postponed a planned meeting with Trump.

How UB40 and “Red Red Wine” became part of the Kavanaugh news cycle
When the cherry trees bloom for no one
Why a Senate vote on stimulus has failed, again
Inside Mark Zuckerberg’s tense meeting with Facebook employees: Transcript
The billionaire founder of Netflix is giving $120 million to black colleges
DOJ asks Congress for broad new powers amid Covid-19. Schumer says, “Hell no.”