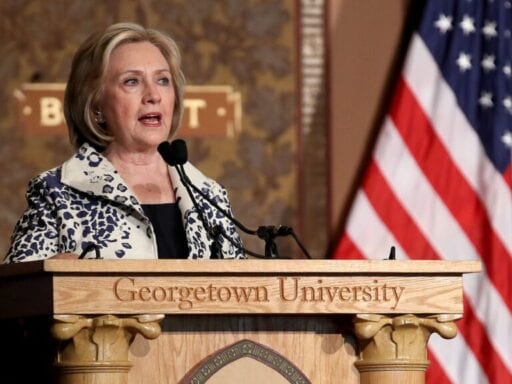 Dozens of former Clinton aides are being contacted by State Department investigators.

The Trump administration is ramping up its investigation into Hillary Clinton’s emails, according to The Washington Post, once again reigniting a politically controversial matter that has managed to live on for the past three and a half years.

These emails — which were sent to Clinton’s unsecure, private server during her time at the State Department — spurred an entire investigation back in 2015, and were the subject of much debate during the 2016 presidential election. Ultimately, the FBI was unable to find any malign intent on Clinton’s part.

Despite the FBI dropping the case, Trump did not; he used it to attack Clinton throughout the election, and has brought it up consistently throughout his presidency, most recently on the sidelines of the 2019 UN general assembly, where he called affair “one of the great crimes.”

Now, as Trump faces allegations from a whistleblower that he misused his power while attempting to have a potential political rival investigated, the Post reports his administration is investigating a former rival as well.

Up to 130 current and former State Department officials who sent messages to then-Secretary of State Clinton’s private email address have been contacted by State Department investigators, the Post’s Greg Miller, Greg Jaffe, and Karoun Demirjian reported. The process of contacting these officials began 18 months ago, died down, and was then revived again last month. And it’s not just senior officials who have been affected by this investigation. Low ranking staffers whose emails ended up in Clinton’s inbox have also been contacted as well.

All of these officials were notified by the State Department that they had potentially committed security violations, because their emails to Clinton from years ago had been retroactively classified, according to letters reviewed by the Post.

State Department officials deny the investigation’s renewal is politically motivated, claiming that this is merely standard protocol for an investigation that started before Donald Trump even became president.

“This has nothing to do with who is in the White House,” a senior State Department official told the Post. “This is about the time it took to go through millions of emails, which is about three-and-a-half years.”

Other officials, however, see the investigation as politically motivated harassment, particularly given most of those sent letters saying they had “been identified as possibly bearing some culpability” in “security incidents” where ultimately found to be “not culpable” of any illegal actions.

“It is such an obscene abuse of power and time involving so many people for so many years,” one former official told the Post. “This has just sucked up people’s lives for years and years.”

The emails at question were mostly sent to Clinton’s unsecured, private server. During her tenure as secretary of state, Clinton handled work related material with her personal email address, which was hosted on a private server set up for her and her husband, Bill Clinton, back in 2001.

Given the potentially sensitive nature of some State Department work, this drew criticism. When this information came to light, the FBI launched an investigation into whether Clinton had broken federal law by mishandling classified information. In the end, the FBI declined to bring a case against Hillary Clinton — though then-FBI Director James Comey did break standard procedure by calling her “extremely careless.”

Although the FBI dropped the case, the public did not, and it is sometimes seen as one of the reasons why Clinton lost the 2016 election. And it’s never been forgotten by Trump, even after almost three years in office — in fact, he won’t stop talking about it.

Even though he’s been in office for almost three years now, Trump continues to bring up Clinton’s emails as a way to rally his supporters. A former senior official familiar with the current email investigation told the Post that the State Department probe was a way “to keep the Clinton email issue alive.”

Indeed, Trump kept the issue alive in recent days while at the UN. During a press conference with Ukrainian President Volodymyr Zelensky — who Trump asked in July to help him find Democratic National Committee emails Trump believes are hidden in Ukraine — the president resounded to a question from a reporter asking if he thought Ukraine was storing Clinton’s emails, which Trump responded “could be.” The president then spoke at length about what he sees as corruption in the Democratic Party and what he claims was wrongdoing by Clinton.

“Frankly, I think that one of the great crimes committed is Hillary Clinton deleting 33,000 emails after Congress sends her a subpoena,” he said.

To be clear, the 33,000 emails Trump mentioned were deleted four months before the subpoena because they were determined by Clinton’s staff to be personal. The deletion of the emails after the subpoena was issued were done by an employee managing the server who had not followed instructions to do so earlier, according to NBC.

The State Department’s current crackdown on those associated with the Clinton emails is especially remarkable considering the Trump administration’s security struggles, current and former officials told the Post.

These include sharing highly classified information with adversaries like Russia and tweeting out images from secret intelligence devices. The Trump administration has also been criticized for their handling of security clearances, particularly when Trump’s son-in-law and senior White House official Jared Kushner was given top-secret security clearance, despite concerns from intelligence officials.

And Trump now has his own server problem. A whistleblower alleges the Trump administration broke protocol to place notes from a call with Zelensky (in which the president asked his Ukrainian counterpart to investigate the DNC emails and potential presidential rival Joe Biden) in a codeword level system meant only for top government secrets. The whistleblower also claims this was done to protect the president from allegations he abused his power on the call, and writes in his complaint call notes were moved to this server a number of times to conceal “politically sensitive” information.

These allegations and the notifications being sent by the State Department have Trump’s critics arguing the president is using his executive power to attack political rivals.

While officials at the State Department argue they are merely following procedure, some of those affected by the investigation disagree, like Jeffrey Feltman, a former assistant secretary for Near East Affairs: “I’d like to think that this is just routine, but something strange is going on.”

Whether anything will result from the email investigation remains to be seen. Some Republican lawmakers have pressed the State Department to complete its review into the classified information stored in Clinton’s personal email server and report back to Congress. Before that happens though, Trump could face a question of impeachment over his administration’s own server use and concerns he may have attempted to have a different political rival investigated.

Meet the moderators of the South Carolina Democratic debate
HR experts: We’d nip Biden’s behavior in the bud
This week in TikTok: Why is everyone so mad at Charli D’Amelio?
Police reform, defunding, and abolition, explained
A year after the Camp Fire, a town called Paradise wonders: Will it ever be the same?
Trump’s executive order on social media bias is a distraction