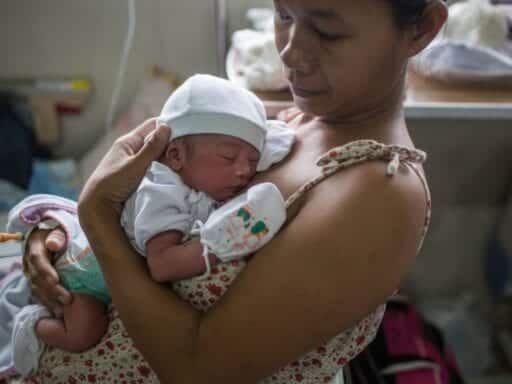 The Trump administration is defending its opposition to an international resolution to promote breastfeeding at the United Nations by claiming it was an effort to support choice.

“We don’t believe women should be denied access to formula,” President Donald Trump tweeted on Monday. “Many women need this option because of malnutrition and poverty.”

But the US’s position goes against the broad global health consensus, experts say: Breastfeeding is generally the best option for nursing mothers, and they should be told that fact, whatever they decide to do. The formula question is especially important in the developing world because of water quality issues, as most baby formula comes in powder form to be mixed with water.

It’s not all that different from the Supreme Court’s recent ruling striking down a California law that required so-called crisis pregnancy centers, which do not provide abortions and often oppose them on religious grounds, to inform their patients that abortions would be available to them elsewhere. And multiple states have laws that require doctors to give inaccurate information about abortion to their patients.

What the situations have in common: They’re about the right to accurate information on health.

On Saturday, Andrew Jacobs wrote for the New York Times that the US threatened to hit Ecuador with retaliatory trade measures and pull military aid because the South American country proposed an international resolution that encourages breastfeeding.

US officials shocked international delegates at the United Nations-affiliated World Health Assembly in May when they pushed for a resolution promoting breastfeeding remove language asking governments to “protect, support, and protect” the practice. They also took issue with a passage that called for policymakers to restrict the promotion of food products that may harm children.

The administration hit back at the report, but they didn’t say it wasn’t true. Trump tweeted that the Times report was “fake news,” then seemed to confirm the story, saying the administration doesn’t “believe women should be denied access to formula,” which the resolution wouldn’t do.

The failing NY Times Fake News story today about breast feeding must be called out. The U.S. strongly supports breast feeding but we don’t believe women should be denied access to formula. Many women need this option because of malnutrition and poverty.

A Health and Human Services spokesperson said the US was “fighting to protect women’s abilities to make the best choices for the nutrition of their babies.” She added that women who aren’t able to breastfeed “should not be stigmatized” and should be “equally supported with information and access to alternatives.”

No one is saying that women should be stigmatized, or that they shouldn’t be able to decide for themselves. They’re simply saying that they should have all the facts. The Trump administration appears to be siding with the $70 billion baby formula industry to stop them from getting them.

The World Health Organization recommends newborn babies be exclusively breastfed up to six months of age, with continued breastfeeding and complementary foods up to two years or beyond. The American Academy of Pediatrics recommends breastfeeding for at least 12 months.

There is mounds of evidence that shows breastfeeding benefits both children and mothers, even in dire circumstances. As Vox’s Julia Belluz lays out, health organizations have long promoted more breastfeeding since science revealed its social and health benefits:

Breastfeeding helps protect against a range of illnesses, including ear, throat, and sinus infections. It also protects against pneumonia and diarrhea, which are common killers of infants globally. Human milk contains many hormones, bacteria, sugars, and antibodies that aren’t found in formula, and these have been shown to fight gastrointestinal and respiratory infections in babies.

Research has also linked breastfeeding to higher rates of survival during the first year of life, higher intelligence, and lower rates of chronic diseases like obesity and diabetes later on. Finally, breastfeeding seems to boost maternal health, reducing the risk of postpartum hemorrhage right after birth; and in the longer term, Type 2 diabetes and breast, uterine and ovarian cancers among mothers. If breastfeeding were near-universal, some 820,000 lives could be saved every year, a Lancet report estimated.

Formula can prove dangerous to babies, especially in areas where water quality is a problem. Aggressive and controversial marketing of infant formula by companies such as Nestle is believed to have caused millions of infant deaths in low- and middle-income countries.

Baby formula generally comes in powder form to be mixed with water, which could be contaminated and therefore put babies in grave danger. Formula also might not be used in the recommended way because parents have issues with reading and interpreting labels. And it’s an expensive option, diverting limited family resources.

“The most important argument is that if a baby is fed with formula, he or she wouldn’t get the benefits, both biological and emotional, that he or she would get from breastfeeding,” said Ana Langer, a professor at Harvard’s School of Public Health.

Langer said there are some scenarios in which formula feeding is the better option, but they are limited, such as a mother receiving chemotherapy. Even in cases where mothers are HIV positive, she said breastfeeding is the recommended action, especially if they are receiving treatment. If they are not, breastfeeding may still be the safer option because of the risks of gastrointestinal complications due to water conditions.

The malnourishment defense doesn’t add up, either. “For women not to be able to produce enough milk, it has to be almost conditions of starvation,” Perez-Escamilla said. “In terms of milk volume, it’s very strongly protected through hundreds of millions of years of evolution,” he added.

Of course, there are plenty of reasons women don’t breastfeed or cannot. Some women struggle because of physical reasons — they may have a medical condition, not produce enough milk, or have side-effects such as cracked and bleeding nipples they can’t get support for. In the United States, there’s a lot of pressure to go back to work fast, and the logistics of pumping on the job can be exhausting. That doesn’t change the scientific recommendation overall.

The Trump administration’s opposition to the breastfeeding resolution is one of several breastfeeding initiatives it’s fighting, siding instead with the infant formula industry, which is largely based in the US and Europe. It is also siding with business interests on international guidelines for “follow-up” formulas marketed for babies more than six months old.

Historically, the US has often been an impediment to improving global breastfeeding standards. It’s the only country to not sign on to the International Code of Marketing of Breast Milk Substitutes, in place since 1981.

This latest case, however, that has the US threatening trade retaliation and pulling military aid over guidelines, is an outlier. “Even though infant formula companies have been lobbying the US government for decades … what is shocking this time around is to see the US government overtly threatening other countries with economic sanctions if they support a WHO resolution endorsing breastfeeding based on very strong scientific evidence,” Perez-Escamilla said.

The US government’s argument about supporting mothers’ choices just doesn’t add up. The resolution isn’t a mandate, it doesn’t force anyone to breastfeed if she can’t or doesn’t want to. What it proposes is to encourage governments to provide the best information available for women and families so that they are able to make an informed choice.

“Everyone is entitled to choose, but in the case of breastfeeding, it is universally accepted that breastfeeding is the best possible way to feed a baby,” Langer, the Harvard professor, said. “No woman should be confused by declarations of this kind.”

Admit it. Republicans have broken politics.
Pete Buttigieg and Beto O’Rourke’s feud boils over at the Democratic debate
Trump’s lawyers began the impeachment trial with a blizzard of lies
Mike Pence on whether he wants to overturn Roe v. Wade: “I do”
Vox Sentences: RIP INF
Trump’s baffling, self-defeating attack on the New York Times