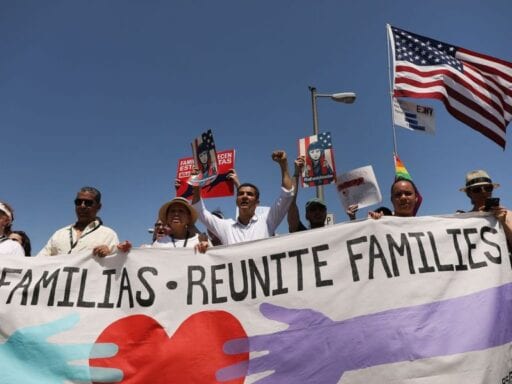 The department that separated families at the border didn’t talk to the agency that took custody of separated kids.

With a court-imposed deadline looming for the government to reunite families separated at the US-Mexico border under President Donald Trump’s “zero-tolerance” policy, the Department of Health and Human Services (HHS) told reporters on Thursday it doesn’t know exactly how many of the children in its care were separated from parents under the policy.

The administration has a list of nearly 3,000 children who might have been separated. But it is still trying to figure out exactly which ones had parents taken away.

HHS Secretary Alex Azar said on a press call his department is working through each individual case file of the 11,800 “unaccompanied alien children,” who are now in the care of HHS’s Office of Refugee Resettlement (ORR), to see which ones were separated from parents at the border by Department of Homeland Security (DHS) officials.

Most “unaccompanied alien minors” happen to be children (mostly teenagers) who came to the US without a parent or guardian. Azar said, however, there were thousands of case files that indicate a child might have been separated from their parents. He was unwilling to give a specific number but said there were “fewer than 3,000” such children.

The reason, according to Azar, is that HHS needs to spend as much time as possible vetting parents to make sure they are who they say they are and that it would be safe to release a child to them. (For example, Azar said HHS staff have identified two cases of parents with criminal histories that included rape, kidnapping, or cruelty to children.)

But it’s also clear that despite previous claims from DHS and HHS that they had a plan in place to reunite families, the Trump administration didn’t officially note which families had been split up to begin with and it is now scrambling at the deadline to bring them together.

The Department of Justice maintained that separations were noted in a child’s case file. That appears not to be the case.

It’s clear that the Trump administration has identified many, or even most, of the parents in ICE custody who were separated from their children. Azar told reporters those parents have been relocated to ICE facilities close to where their children are staying, so that they can be reunited when the deadline arrives; he emphasized that reunions weren’t happening more quickly because “we will use every minute of every day that the court allows us” to vet parents before releasing children into their care.

But Azar wasn’t willing to put a number on that tally. And his justification was that HHS is still trying to figure out exactly how many children were separated by DHS officials and then sent into HHS’s care.

As Azar explained it, a child’s case file with the ORR might note that the younster says that he or she traveled to the US with a parent — which would lead a staffer to conclude that the kid was separated from the parent at the border. It might instead be, however, that the parent and child got split up at some point along the way to the US and the child arrived in the US unaccompanied. According to Azar, HHS doesn’t have the information to know on its own whether that’s true and needs to carefully check cross-references with ICE and Customs and Border Protection.

“It is important to remember that information from children can sometimes be unreliable,” Azar said.

So while Azar maintains the government plans to comply with last week’s reunification court order, he all but called it unreasonable to expect HHS to straighten out these cases in so little time.

What makes this odd is that before the court order, the federal government emphasized it had a process in place to reconnect parents and children after separations. A fact sheet sent to reporters on June 23 began, “The Department of Homeland Security (DHS) and Health and Human Services (HHS) have a process established to ensure that family members know the location of their children and have regular communication after separation.”

Furthermore, during a conference in the family reunification lawsuit (held before the judge’s order), a Department of Justice lawyer maintained that DHS “generally” noted when a child had been separated from a parent when it sent the kid’s file to ORR:

When D.H.S. is going to transfer a child to the custody of O.R.R., there is a portal that is used to essentially make that request for a space to be provided by O.R.R. So in that D.H.S. will put the information regarding the child, regarding — generally that will notate that. If it has been a separation the same portal would also be used [as for a child who arrived unaccompanied], but generally in that there would be provided information of a separation. So that information, then, is able to be shared with ORR and ORR is able to be aware of that.

That was the basis on which the judge ordered the administration to reunite families within 30 days — the understanding that generally the department separating a family had made a note of the separation when sending along a child’s case. Now, as the government scrambles to comply with the court order, it’s clear that officials are trying to create a reunification system on the fly.

Currently he government is racing against the clock — and possibly cutting corners — to solve a problem it created by separating families without clear documentation of when they were split up or a plan for when they could be put back together.

Elizabeth Warren makes a forceful argument on how the Hyde Amendment worsens inequality
Montana’s Senate race was supposed to be easy for Republicans. It’s a dead heat.
Vox Sentences: LA’s teachers are still striking
Iran’s coronavirus outbreak has hit the highest levels of government
156 countries are teaming up for a Covid-19 vaccine. But not the US or China.
The new Hunger Games prequel is introspective and dark as hell