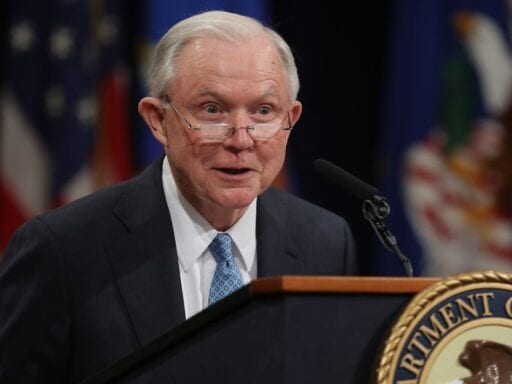 Trump administration officials have repeatedly denied that they pursued a policy of intentionally separating immigrant families arriving at the southern border in 2018 — depicting the separation of parents from their children as a side effect of a “zero tolerance” policy of prosecuting all border crossers.

A new draft report from a government watchdog obtained by the New York Times shows they were lying.

“We need to take away children,” then-Attorney General Jeff Sessions reportedly told five US attorneys on the border during a meeting in May 2018 (to the lawyers’ alarm), adding that if parents care about their children, they shouldn’t bring them to the US in order to seek “amnesty.”

The Times’s description of the 86-page report from the Justice Department’s inspector general represents a damning indictment of the officials who were at the center of one of the Trump administration’s most heinous immigration policies, which generated widespread protests and came to symbolize his punitive approach to immigration enforcement.

While former Homeland Security Secretary Kirstjen Nielsen has largely taken the blame for the policy publicly, it turns out that Sessions and his deputy Rod Rosenstein were much more directly involved in pushing for family separations than previously known.

When Chief of Staff John Kelly left the White House, he previously suggested that Sessions, who once infamously cited a Bible passage about law and order to defend the practice, was the architect of family separations.

And according to the Times, Sessions considered separating families to be a feature of the “zero tolerance” policy meant to deter immigrants from attempting to cross the border without authorization.

Rosenstein also emphasized the policy, telling the US attorneys that no children were too young to be separated from their parents. One of the prosecutors, John Bash, decided not to prosecute two cases involving families in which the children were just babies, and Rosenstein told him he should have gone ahead.

Bash later told his staff that the cases should not have been declined: “Per the A.G.’s policy, we should NOT be categorically declining immigration prosecutions of adults in family units because of the age of a child,” he said.

Rosenstein has largely evaded public scrutiny over family separations. But he had defended the practice during an American Bar Association conference in August 2018, arguing that it was consistent with the law concerning unauthorized immigration to the US, which he said must be applied equally to everyone, including those with children.

But for the duration of the zero-tolerance policy, prosecutors actually had a harder time enforcing the law in serious felony cases because they were overwhelmed in trying to prosecute every person who crossed the border without authorization. According to the report, a Texas prosecutor informed the DOJ in 2018 that “sex offenders” were consequently freed from custody. The US Marshals Service was also unprepared for the implementation of the zero-tolerance policy, meaning that it had to divert resources from serving warrants in other cases, the report said.

Beginning in mid-2017, the federal government ran a pilot program in El Paso, Texas, under which it began filing criminal charges against anyone who crossed the border without authorization, including parents with minor children — even though many of them intended to seek asylum in the US.

Parents were sent to immigration detention to await deportation proceedings. Their children, meanwhile, were sent to separate facilities operated by the Department of Health and Human Services’ Office of Refugee Resettlement and, in some cases, released to other family members in the US or foster homes. (Previous administrations would have simply released the families from detention altogether in most cases.)

The Trump administration formalized the policy in May 2018. At least 5,000 families were separated before a California federal court ordered the federal government in June 2018 to reunify the families affected and end the policy.

The federal government, however, neglected to link the children to their parents in its databases, making the reunification process difficult, especially in the hundreds of cases of children who were under the age of 5, including one who was just 4 months old.

“We spent five minutes thinking it through and concluded that it was a bad idea,” she told the Times. “The morality of it was clear — that’s not who we are.”

Senior Trump administration officials, including Nielsen, have repeatedly denied that they pursued a policy of family separation:

ENOUGH of the misinformation. This Administration did not create a policy of separating families at the border. pic.twitter.com/y0uuYUkSEL

Nielsen also told Congress in December 2018 that the administration “never had a policy for family separation.”

It was later revealed that she had, in fact, signed a memo greenlighting the practice, which clearly stated that DHS could “permissibly direct the separation of parents or legal guardians and minors held in immigration detention so that the parent or legal guardian can be prosecuted.”

Amid the Covid-19 pandemic, the administration has tried to carry out what immigrant advocates call a new kind of family separation. This time, it’s pressuring parents already detained within the US to voluntarily separate from their children by presenting them with what the administration has called a “binary choice.” Either allow their children to be placed with relatives or a foster family in the US while the parents remain detained, or stay together as a family in indefinite detention and risk contracting the coronavirus.