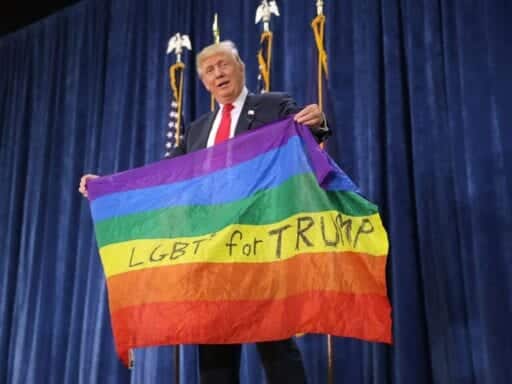 They want to define gender at birth — and force DNA tests to prove otherwise.

The Trump administration is weighing making its biggest attack on transgender rights yet in a maneuver that would strip federal recognition of the gender identity of some 1.4 million Americans — and require genetic testing in some cases to match a person’s gender with the sex they were assigned at birth.

Erica Green, Katie Benner, and Robert Pear of the New York Times reported on Sunday that the Department of Health and Human Services is floating a memo that would establish the legal definition of sex under Title IX — the federal civil rights law that bans discrimination in education on the basis of gender — that would render immutable the sex of a person at birth. In other words, the government would not recognize a person’s gender other than the one based on their genitalia when they’re born.

The department argued in its memo that key government agencies needed to adopt an explicit and uniform definition of gender as determined “on a biological basis that is clear, grounded in science, objective and administrable.” The agency’s proposed definition would define sex as either male or female, unchangeable, and determined by the genitals that a person is born with, according to a draft reviewed by The Times. Any dispute about one’s sex would have to be clarified using genetic testing.

According to the Times, it would “eradicate federal recognition” of some 1.4 million transgender Americans.

HHS is preparing to formally present the new definition to the Justice Department before the end of the year, and if the department decides the change is legal, it could be enforced across Title IX laws and government agencies, including the Departments of Education, Justice, Health and Human Services, and Labor.

The effects could be far-reaching — it could impact which locker rooms and bathrooms transgender students could use as well as which sports teams students join or what happens to single-sex classes, the Times points out. If enacted, it could even require some people to produce DNA tests as part of their educational experience — an unprecedented step to enforce a biological definition of gender.

The Trump administration has been terrible on transgender rights

The Obama administration worked to advance transgender rights and loosen federal regulations to allow for more gender fluidity — including defining gender identity as protected by Title IX. President Donald Trump and his administration have taken steps to reverse that.

Soon after taking office, the Trump administration sent out a letter officially revoking Obama-era guidance on protecting trans students in federally funded schools, saying it was federal overreach. Trump has sought to ban transgender people from serving in the military, rescinded a memo protecting trans workers, and stripped protections for trans prisoners. It has also worsened protections for transgender people in health care.

Trump on the campaign trail said he would embrace LGBTQ people and said he would “fight” for them while Hillary Clinton would bring in “more people that will threaten your freedoms and believes.” But as Vox’s German Lopez pointed out, he’s done quite the opposite:

As president, Trump has acted more or less how you would expect a typical anti-LGBTQ Republican to act. Maybe that reflects his own opinions. Maybe it reflects the views of the people he’s surrounded himself with in his administration, including Vice President Mike Pence and Attorney General Jeff Sessions, both of whom have very long histories of anti-LGBTQ causes.

This new assault on transgender people — and one that includes genetic testing — is just the latest chapter.

Germany is launching a new experiment in basic income
The problem with Trump’s “reality show” pictures, according to Obama’s photographer
Recode Daily: WeWork might be worth just half of what it once was
Vox Sentences: A “very bad day” for Google
What we know about the death toll in Puerto Rico
Trump has been impeached a second time