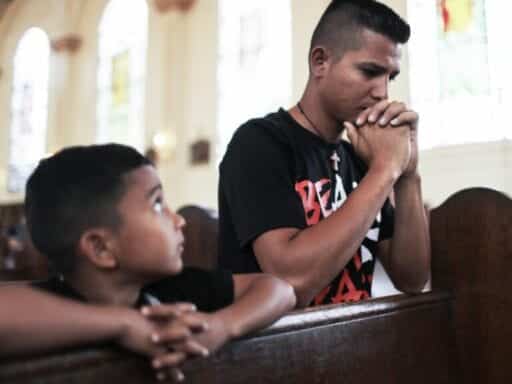 Families crossing the US-Mexico border would be forced to choose: stay for months (or years) in detention or agree to separation.

The Trump administration is apparently considering a reboot of its least popular immigration policy: the widespread separation of families who cross the US-Mexico border.

According to the Washington Post, senior administration officials are discussing a policy that would keep families in detention for a few weeks, and then force them to make a choice: to stay in detention for the months or years it takes for their cases to be resolved (and waive their rights under the Flores court settlement, which prevents the administration from keeping children in immigration detention indefinitely), or agree to be separated so that the child can go to the less restrictive custody of Health and Human Services. (They would also have the implicit option to give up on their asylum cases and agree to imminent deportation.)

While the Trump administration’s last effort at family separation was put on hold after massive political blowback, first by an executive order from Trump and then with a legal injunction from a federal judge, courts and the American Civil Liberties Union have agreed with the administration that it would be legal to force families to choose between detention and separation, as long as they had the choice.

But that doesn’t really explain why the administration is contemplating doing this. It appears to contradict the administration’s own plans to indefinitely detain all families through a change in regulation. It ignores evidence that shows, uniformly, that harsh treatment isn’t deterring families from seeking asylum. And politically, it refocuses attention to the biggest scandal Trump has faced on his signature issue.

The initial justification for family separation was that the administration was trying to end “catch and release” — apprehending families who’d illegally crossed the US-Mexico border, giving them court dates, and then allowing them to live in the US while their cases were pending.

Trump officials said that since the 1997 Flores court settlement (as interpreted under the Obama administration) barred them from keeping children in immigration detention with their parents for the months or years a case might take, they had to separate the family — keeping the parents in detention while the children were sent to HHS as “unaccompanied alien children.”

In a June ruling in the case Ms. L vs. ICE, Judge Dana Sabraw declared that this wasn’t an acceptable explanation and barred the Trump administration from forcibly separating families.

At the time, the government said it wouldn’t do that. Instead, it quietly started releasing families again. After a spike in apprehensions in August, however — which brought the number of families crossing into the US between official border crossings up to the levels of the late Obama administration, much higher than they’ve generally been for the past few years — they appear to be reconsidering.

The weird thing about this is that the administration already has a plan to stop “catch and release” again: to supersede the Flores agreement with regulations that would govern the conditions under which families could be kept in immigration detention for as long as it took to process their case.

Those regulations have been published in draft form for public comment. They could be finalized next spring, though Gee would probably be asked to review them to ensure they complied with the spirit of the Flores agreement. In the meantime, the administration is reportedly trying to build up family detention capacity.

And it’s not clear where it would put the families who make either choice.

Because the Trump administration doesn’t yet have the capacity to detain thousands of families for months or years, it’s not clear what it would do if most families chose detention. Meanwhile, HHS’s Office of Refugee Resettlement is currently looking after record numbers of unaccompanied children, partly due to the fact that some relatives eligible to sponsor their children are (justifiably) afraid they’ll risk deportation if they step forward. So if most parents chose separation, that agency would be overwhelmed.

Ultimately, the Trump administration’s goal is to stop people from crossing into the US to seek asylum to begin with. (While the administration maintains that its goal is simply to stop them from crossing illegally into the US, they have also limited intake for asylum seekers at legal ports of entry, claiming they don’t have the resources to process them.)

The proposed plan to force immigrants to choose between separation and indefinite detention — like “zero tolerance” prosecution and family separation, and like the efforts to supersede the Flores agreement — is supposed to serve as a deterrent, preventing future would-be migrants from deciding to come into the US at all. As the Post reports, the administration is currently trying to “reverse soaring numbers of families attempting to cross illegally into the United States” — and the forced-choice plan is one option it’s considering to do that.

Except that there is no evidence that harsh treatment — either separation or detention — actually works as a deterrent.

When the Trump administration started separating families en masse in April, as CNN’s Tal Kopan has reported, officials initially expected that Border Patrol would start noticing a drop in family apprehensions within two or three weeks. That didn’t happen: Apprehensions stayed flat through the end of the policy in June.

That shouldn’t have been surprising because the Trump administration’s “pilot” of family separation in summer 2017 didn’t have a deterrent effect either — despite the administration’s extremely dubious claim that apprehensions dropped over the course of the pilot, they actually increased. And the last effort at long-term detention, under Obama in 2014, also showed no deterrent effect, as an analysis from Tom Wong for the Center for American Progress has shown.

The costs of family separation are obvious: It’s the rare Trump administration immigration policy that has been reversed not (initially) because of the courts, but because of the political backlash. Not only were Democrats mobilized and outraged, but conservatives and Republicans tried to distance themselves from the administration’s more enthusiastic justifications.

The administration has spent the past several months trying to get what it wants on policy without resorting to the terrible optics and politics of separation. It’s not at all clear why it would abandon that plan now.

Why you should talk to your child about the coronavirus
The power of the Black athlete
How President Emmanuel Macron bungled France’s coronavirus response
Why the government is investigating Apple, Amazon, Google, and Facebook for antitrust — but not Mic...
Christopher Robin’s thoroughly charming post-credits scene, explained
What Trump’s bizarre love of Mutiny on the Bounty actually reveals about him