The Trump administration says it must lock up families to keep them together. That’s not true. 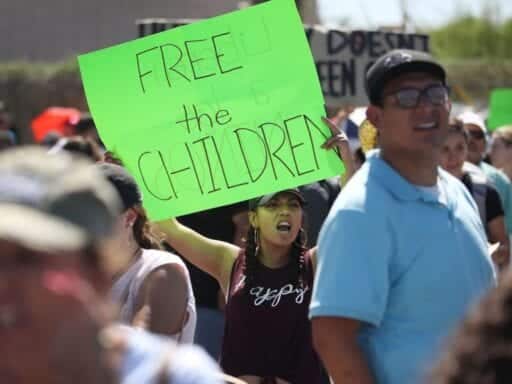 The Trump administration has a new official policy to deal with families seeking asylum at the border. They won’t separate children from their parents, but they will keep those families locked up together until their cases are processed — even though it’s against the law to detain immigrant children indefinitely.

The Department of Justice (DOJ), which announced the new policy Friday night, has come up with a weak legal argument to justify it. (Vox’s Dara Lind explains the policy here.) DOJ lawyers said keeping families in detention centers is the only way to comply with US District Judge Dana Sabraw’s recent injunction that banned immigration authorities from separating families and ordered them to reunite those they had already split up.

Under the DOJ’s reasoning, Sabraw’s order means that the administration can ignore a 2015 court order (the Flores agreement) that bars them from detaining children for longer than 20 days during immigration proceedings.

“The minor cannot be released under [the Flores agreement] without separating him or her from their parent, as such a separation would violate the injunction,” the DOJ stated in its Friday announcement.

This is just not true. President Donald Trump has other options to enforce immigration laws without violating the Flores agreement.

The Department of Homeland Security (DHS) can place children and their parents under supervised release. These are known as “alternatives to detention,” and DHS has created several programs that effectively keep track of families while their cases wind through the courts.

One alternative is to release immigrants under community supervision, in which a nonprofit group or government contractor provides them with a social worker who helps them find housing and transportation, and who makes sure they attend court hearings and comply with the law.

Another alternative is to release them under electronic monitoring, which generally involves placing GPS ankle monitors on the parents and assigning them caseworkers.

Up until recently, Immigration and Customs Enforcement (ICE) was running two such programs at the national level: the Intensive Supervision Alternative Program (ISAP), which involves electronic monitoring, and the less restrictive Family Case Management Program (FCMP), which relied on community monitoring. The methods used in these programs are available to DHS and are much cheaper than traditional detention.

Social workers can supervise immigrants outside of jail

When someone is arrested for an immigration violation, an ICE officer has a lot of discretion in deciding whether to book that person in immigration jail or to release them while their case makes its way through immigration court. (Immigration judges do not make initial bond decisions the way judges do in the criminal court system). The decision often comes down to whether the ICE officer thinks that person might commit a crime or skip town.

Since 2013, ICE officers have been using a computer algorithm, called the Risk Classification System, to help them assess whether an immigrant is a danger to the community or a flight risk. They do background checks and search for open warrants, past immigration violations, and gang connections. They also do extensive interviews about each person’s ties to the community, job history, and drug use. The algorithm recommends whether or not an immigrant should be detained, but officers aren’t required to follow it, and they often don’t.

The Family Case Management Program was launched by the Department of Homeland Security in 2015, in response to the waves of mothers and children seeking asylum from gang violence. Instead of keeping children in detention centers with their parents, families in certain cities were released and monitored by social workers, who helped them find lawyers, housing, and transportation, and made sure they attended their court hearings.

The contractor that ran the program said 99 percent of participants “successfully attended their court appearances and ICE check-ins.” That included the 15 families who were ultimately deported.

But in June 2017, after Trump took office, DHS shuttered the program without explanation. Recent public outcry over family separations has renewed questions about the decision to end the program. On Friday, a spokesperson for the agency told Vox that the program was effective, but suggested that the agency had hoped it would lead to more deportations than it did.

Immigration authorities have partnered in the past with nonprofit groups to provide other forms of community supervision, and the compliance rates were also high. A 2012 program with Lutheran Immigration and Refugee Services provided community-based supervision to 240 immigrants whom ICE would normally keep behind bars. It had a 97 percent appearance rate, costing an average of $24 a day. There is nothing stopping the agency from launching new partnerships like these.

Ankle bracelets are another option to detention

Central American mothers and children seeking asylum were released from detention centers in 2016 after a federal judge told DHS it could not keep children detained more than 20 days. In response, DHS ramped up its Intensive Supervision Alternative Program (ISAP), run by a subsidiary of the GEO Group, a Florida-based company that operates private prisons and most of ICE’s detention centers.

Electronic monitoring and community supervision are just a few options the Trump administration could prioritize instead of detention, even if it decides to keep the “zero tolerance” policy intact. They would also save the US government a ton of money, which is something Republicans say they care about.

To understand just how expensive it is for DHS to house, shelter, and feed immigrants, all you have to do is look at the agency’s own numbers. In its budget request for fiscal year 2018, DHS said that it cost about $133.99 per day to hold an adult immigrant in detention and $319.37 for an individual in family detention. Meanwhile, the agency said the average cost of placing someone in an alternative program is $4.50 per day. That’s a huge difference.

The problem is that the Trump administration isn’t interested in other options. To the president and other immigration hawks, these alternatives to detention represent what they consider the failed “catch-and-release” policies of the previous administration.

But these programs do work, and they do allow the government to enforce immigration laws effectively. And they are far better than the nightmare of separating families or keeping them together in jail with no end in sight.

The Heathers TV show was pulled following a mass shooting — for the third time this year
House Republicans’ impeachment stunt is an attempt to distract from the allegations against Trump
US tops world in coronavirus cases, Boris Johnson has Covid-19: Friday’s coronavirus news
AG Bill Barr’s opening statement to the Senate Judiciary Committee
All the companies that have cut ties with Saudi Arabia over Khashoggi’s disappearance
Republicans showed why Congress won’t regulate the internet