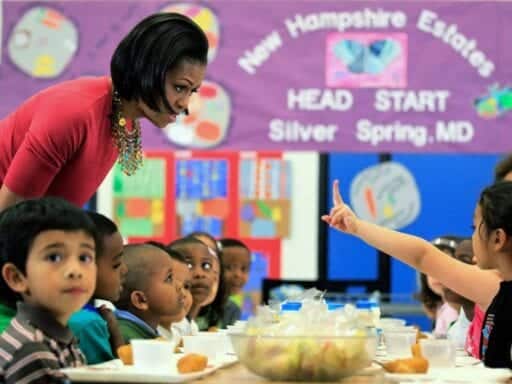 On her birthday, the Department of Agriculture announced it plans to nix school lunch requirements championed by Michelle Obama.

The current meal regulations were established under the Healthy Hunger-Free Kids Act of 2010 spearheaded by Michelle Obama. That law set new standards for school meals for students in grades K-12 to ensure children were receiving more vegetables, fruits, whole-grain rich foods, and fat-free milk. For example, the law required students to have fruit with every school breakfast, and mandated schools serve a set amount of a variety of vegetables that include both leafy greens and starchy plants.

But the Department of Agriculture argues the Obama-era rules are leading to high costs and rampant food waste. On Friday — Michelle Obama’s birthday — the department announced its proposal to change those rules.

“Schools and school districts continue to tell us that there is still too much food waste and that more common-sense flexibility is needed to provide students nutritious and appetizing meals,” Agriculture Secretary Sonny Perdue said in a statement to The New York Times. “We listened and now we’re getting to work.”

The Department of Agriculture’s own research on the effects of the Obama-era rules undercut this claim, however. In its 2019 “School Nutrition and Meal Cost Study,” the department found no dramatic changes in the amount of food waste, and also found compliance with the rules led to better participation rates in school meal programs.

Experts fear that should the rules be changed, schools will try to substitute fresh fruit and vegetables with more cost-efficient foods that lack nutrition. For example, experts worry baked sweets like muffins could be substituted for servings of fruit, and that potato products such as french fries could replace green vegetables.

The department has admitted new foods might be introduced, but has framed that as a good thing. It wants cafeterias to be allowed to serve a la carte items like hamburgers that students can choose instead of a full meal. In the past Perdue has argued that the most important thing is making sure students eat — he said in 2017 he believes healthy meals are “ending up in the trash” because they simply aren’t appetizing to students.

“If kids aren’t eating the food, and it’s ending up in the trash, they aren’t getting any nutrition — thus undermining the intent of the program,” he said.

But advocacy groups object to this sort of thinking. The National Alliance for Nutrition and Activity argues the new rules could create a “giant junk food loophole” because “side dishes like cookies and fries, which could be offered once in a while as part of a balanced lunch, could be offered a la carte every day.”

This isn’t the first time the administration has rolled back parts of the Obama-era rules. In 2018, the Agriculture Department finalized a rule that allowed schools to abandon their commitment to lowering sodium and increasing whole-grain foods.

That decision is now being challenged in court by a coalition of six states and Washington DC, which claims the changes present health risks to children.

As with the 2018 rule, dissent around the newest regulation change is beginning to surface, primarily among Democrats. Rep. Ayanna Pressley (D-MA) tweeted Friday, “The Occupant is trying to play petty with the food our babies eat. Add it to the list affirming that the cruelty is the point with this White House.”

With lawsuits against the first set of rollbacks to the lunch restrictions already in motion, if the new rules are successfully implemented, it may be merely a matter of time before they, too, are challenged in court.

For many low-income children, school is the only opportunity to access a nutritious meal. As Vox’s Gaby Del Valle wrote when the Department of Agriculture first began relaxing the Obama-era rules:

For the 30 million students who depend on free and low-cost school lunches that are subsidized by the federal government, the relaxed nutrition standards could be hugely detrimental.

The Healthy, Hunger-Free Kids Act was a game-changing way of providing low-income students with healthy meals — by relaxing these rules, the Trump administration is exacerbating a system where only those who can afford to eat healthy will be able to do so.

One of the consequences of the changes could be an increase in obesity rates, according to research from the Food Research and Action Center. And as Dr. Rachel Borton, the director of the Family Nurse Practitioner online program at Bradley University, argued in an op-ed for The Hill, poor eating in childhood can have lasting effects — particularly if habits are formed, or if students remain on a nutrition-poor diet over the course of a number of years.

“If those students don’t have access to the nutritious options provided by the school, they may turn to low cost, processed foods that are high in calories but sparse in nutrients. Immediate effects of this type of diet include weight gain and poor physical health,” Borton wrote. “Long-term impacts range from increased risk of obesity, heart disease, diabetes, and a slew of other unfortunate health outcomes.”

The Healthy Hunger-Free Kids Act of 2010 was created to combat these health concerns — and there’s proof that it worked, according to the Department of Agriculture’s 2019 review of the program. That study found scores for the Healthy Eating Index (which measures the quality of the diet) shot up drastically from 49.6 in 2009-2010 to 71.3 in 2014-2015.

These scores, however, could go down following the Trump administration’s new rollbacks. And if schools fail to properly serve their students, it is students whose only meals come during the school day who will hit the hardest.