The Trump administration will deny visas to uninsured, low-income immigrants 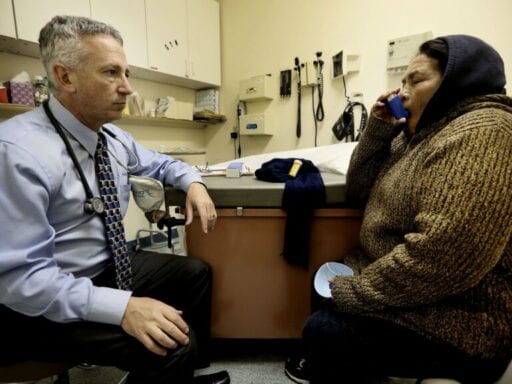 Share
Loading...
Joel Diamnat checks on a patient during a visit to a free clinic in Solana Beach, California, in 2013. The clinic provides free routine medical care to patients without health insurance, including many undocumented migrants from Mexico who live in the area. | Sandy Huffaker/Corbis via Getty Images

It’s another blow to the social safety net for immigrants.

President Donald Trump issued a proclamation Friday night barring immigrants who do not have health insurance and cannot afford to pay medical care costs from getting visas of almost any kind to enter the US.

Immigrants must now show that they will obtain health insurance within 30 days of their arrival in the US or otherwise demonstrate that they will be able to pay for their medical expenses. The executive order does not lay out clear procedures for determining whether immigrants meet these requirements — it will be up to individual consular officers charged with evaluating visa applications and the State Department.

Trump said the move is a means of cutting costs to American citizens, who he said pay higher taxes, premiums and medical costs to cover hospital fees for those who cannot afford care.

According to a Kaiser Family Foundation study, noncitizens are “significantly more likely” to be uninsured than citizens: among those under age 65, 23 percent of immigrants with legal status and 45 percent of unauthorized immigrants are uninsured. Only those seeking legal status, however, would be impacted by the proclamation.

Larry Levitt, executive vice president for health policy at the Kaiser Family Foundation, tweeted Friday that immigrants with legal status do qualify for health care subsidies under the Affordable Care Act. But under the proclamation, subsidized insurance does not qualify as sufficient coverage.

Friday’s proclamation offers exceptions for immigrants who already have a valid visa, children of US citizens, unaccompanied children, permanent residents who have been outside of the US for more than one year, and recipients of “special immigrant visas” for Afghanis and Iraqis who have aided the US government and their families. The administration can also make additional exceptions on a case-by-case basis.

The proclamation appears to cover all other visa categories across the board. Parents and spouses of US citizens and the immediate family members of lawful permanent residents are also subject to the proclamation.

To justify the proclamation, Trump invoked the president’s power under the Immigration and Nationality Act to “suspend the entry of all aliens or any class of aliens … or to impose on the entry of aliens any restrictions he may deem to be appropriate.”

It’s the same authority that the Supreme Court accepted as a defense for Trump’s travel ban, under which citizens of Iran, Libya, North Korea, Syria, Venezuela, Yemen, and Somalia are still blocked from entering the US.

The executive order fits in with many of Trump’s policies

The proclamation fits in with one of the broader ideas guiding Trump’s immigration policy: that immigrants drag down public resources without offering the US anything in return. It’s been a focus for Acting US Citizenship and Immigration Services Director Ken Cuccinelli, who even proposed an amendment to Emma Lazarus’s famous poem on the Statue of Liberty: “Give me your tired and your poor who can stand on their own two feet.”

A report by the National Academies of Science found that first-generation immigrants and their children paid $1,600 less in taxes than they received in public benefits annually from 1994 to 2013. But second and third generations, who were better educated, contributed more than they took in — $1,700 and $1,300 annually.

Trump issued an executive order in September allowing states that do not have the resources to support refugees in becoming “self-sufficient and free from long-term dependence on public assistance” to turn them away.

A Trump administration rule slated to go into effect October 15 would also make it more difficult for low-income immigrants to enter the US and obtain green cards. A federal judge in California indicated that he is likely to block the rule before it goes into effect, but it has already had the effect of scaring immigrants into unenrolling from their health care benefits.

The Department of Housing and Urban Development also proposed a rule in May that would allow the agency to evict families of mixed immigration status from public housing — an estimated 108,000 people.

Health insurance is hard enough for immigrants to access in this county; it’s hard enough for citizens too. Our healthcare system is shot and the Trump Administration knows this. This is another economic and racist attack on a community who deserves healthcare in the first place. https://t.co/diCfPMf6py

The proclamation comes after nearly all of the Democratic presidential candidates have backed the idea of providing unauthorized immigrants healthcare coverage. Every candidate raised their hands when asked if they supported it at a debate in June.

Trump is trying to use it against his Democratic rivals.

“As long as I’m president, no one will lay a hand on your Medicare benefits,” Trump told voters at a speech in Florida on Thursday. “I will never allow these politicians to steal your health care and give it away to illegal immigrants.”

A Republican helped sink one of Trump’s court nominees over his racist college writings
NBA star Kobe Bryant has died in a helicopter crash
The effect of Black Lives Matter protests on coronavirus cases, explained
The stunning hypocrisy of Bill Barr
Fare evasion costs cities millions. But will cracking down on it solve anything?
South Carolina exit polls show Buttigieg and Klobuchar lagging significantly with black voters