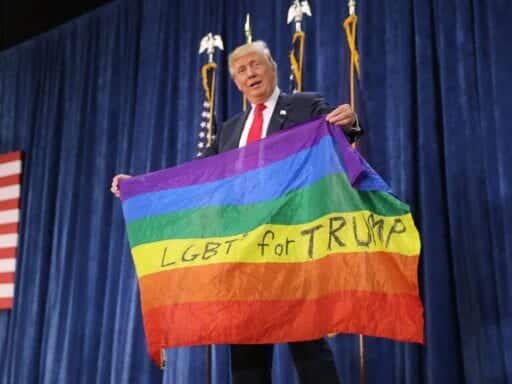 President Donald Trump’s administration is working on yet another anti-LGBTQ policy, the New York Times reported over the weekend.

According to Erica Green, Katie Benner, and Robert Pear at the Times, Trump’s Department of Health and Human Services (HHS) is considering an interpretation of Title IX, the federal civil rights law that bans sex discrimination in federally funded schools, that “would define sex as either male or female, unchangeable, and determined by the genitals that a person is born with.” (This would defy the scientific and medical evidence embraced by major organizations like the American Medical Association and American Psychiatric Association.)

HHS is the primary agency working on the draft proposal, but other agencies, including the departments of Education, Justice, and Labor, are expected to adopt it as well should the administration move forward with the change. It’s not clear when that will be, although the Times reported that HHS “is preparing to formally present the new definition to the Justice Department before the end of the year.”

The proposal would effectively erase protections for trans people, who identify with a gender different from the one assigned to them at birth, from federal civil rights laws — ensuring that the laws do not prohibit discrimination against trans people in any setting, including the workplace, housing, schools, and health care.

HHS has refused to comment on “alleged leaked documents,” CNN reported. Civil rights groups and LGBTQ advocacy organizations, meanwhile, have suggested that they will take the administration to court should it move forward with the change.

The anti-LGBTQ agenda stands in sharp contrast with Trump’s rhetoric on the campaign trail. The then-candidate held up a Pride flag at a campaign event, and he vowed to work for “L, G, B, T … Q” people at the 2016 Republican convention. Instead, Trump’s administration has done a lot to undermine LGBTQ — and particularly trans — rights.

The anti-transgender proposal hits on a broader legal debate

One reason the Trump administration’s latest proposal is even possible: Under federal and most states’ laws, discrimination against LGBTQ people, based on sexual orientation and gender identity, is not explicitly prohibited. The exclusion of LGBTQ people is a big hole in civil rights laws, which generally ban discrimination based on race, sex, and religion, among other protected categories.

This means that it’s not explicitly illegal for someone to be fired from a job, evicted from a home, or kicked out of a business just because an employer, landlord, or business owner doesn’t approve of the person’s sexual orientation or gender identity.

According to advocates, discrimination against people based on their sexual orientation or gender identity is fundamentally rooted in prohibited sex-based expectations. For example, if someone discriminates against a gay man, that’s largely based on the expectation that a man should only love or have sex with a woman — a belief built on the idea of what a person of a certain sex should be like.

Similarly, if someone discriminates against a trans woman, that’s largely based on the expectation that a person designated male at birth should identify as a man — again, a belief built on the idea of what a person of a certain sex assigned at birth should be like.

LGBTQ advocates, citing legal precedent, say that what the original laws’ authors believe or intended is irrelevant. Joshua Block, an attorney with the ACLU LGBT and HIV Project, cited a 1998 Supreme Court case, Oncale v. Sundowner Offshore Services Inc., in which the Court unanimously agreed that bans on sex discrimination prohibit same-sex sexual harassment. Sexual harassment between people of the same sex was not something the authors of federal civil rights laws considered, but it’s something, the Supreme Court said, that a plain reading of the law protects.

“Oncale says that’s irrelevant whether [Congress] contemplated it,” Block previously told me. “This is literal sex discrimination. Whether or not that’s what Congress was focused on doesn’t make it any less a type of discrimination covered by the statute.”

The Obama administration generally embraced this argument for trans people, interpreting federal civil rights protections — including those that ban discrimination in the workplace, housing, education, and health care — to apply to trans people, although not gay people. Most controversially, the administration took this to apply to school bathrooms and locker rooms, releasing a guidance that asked federally funded schools to let trans students use the facility that corresponded with their gender identity instead of the gender assigned to them at birth.

Several courts have also accepted this interpretation of federal law, though the US Supreme Court has yet to validate it.

The Trump administration’s move, however, would declare that federal sex discrimination bans do not cover trans people. This would not only flip the Obama administration’s move to protect trans people but would also attempt to apply the anti-trans interpretation across the entire federal government from this point forward. If allowed by the courts, that would ensure that future implementation of federal civil rights laws leaves trans people behind.

It would, however, be far from the first anti-LGBTQ step the Trump administration has taken.

The Trump administration has adopted a host of anti-LGBTQ actions over much of the past couple of years. Here are some of the major examples:

The administration’s anti-LGBTQ agenda even extends to more minor issues, such as Trump’s refusal to acknowledge LGBTQ Pride Month.

All of the moves amount to a comprehensive agenda — one that, short of actual legislation, has taken nearly every step possible to undermine the rights of LGBTQ people.

Trump suggested he would be LGBTQ-friendly. He isn’t.

On the campaign trail, Trump said he would be different — the first Republican president to embrace LGBTQ people. He posed with the Pride flag and acknowledged “L, G, B, T … Q” people. He initially defended the right of Caitlyn Jenner, a transgender woman, to use the bathroom that aligns with her gender identity. He tweeted, in reference to a mass shooting at a gay club in Orlando, Florida, “Thank you to the LGBT community! I will fight for you while Hillary brings in more people that will threaten your freedoms and beliefs.”

There were warning signs, though. Trump had surrounded himself with people, like Pence and Sessions, who have long histories of opposition to LGBTQ people. And when the Obama administration put out a guidance protecting trans people in federally funded schools (including in bathrooms and locker rooms), Trump vowed to do away with the guidance.

So the bulk of LGBTQ advocates never fell for the nice-sounding rhetoric.

As president, Trump has proven the skepticism right, establishing the types of policies one would expect from a typical anti-LGBTQ Republican president. Maybe that reflects his own opinions. Or maybe it reflects the views of the people he’s surrounded himself with in his administration.

Whatever the cause, the result is Trump’s presidency and administration have now adopted a broad anti-LGBTQ agenda — one that has gone after LGBTQ workers, students, troops, and patients. And more than showing Trump’s dishonesty, this agenda potentially threatens the rights of millions of LGBTQ Americans.

“People debate, ‘Does he personally like or dislike LGBT people?’ That’s irrelevant,” James Esseks, director of the ACLU’s LGBT and HIV Project, previously told me, reflecting on the administration’s first year. “He has put in place people who have firmly anti-LGBT agendas, and he’s not just enabled but endorsed those agendas himself. He’s been a train wreck for LGBT people nationwide.”

With the latest reports, the Trump administration’s second year is looking to be just as bad for LGBTQ Americans.

Good news: We can totally beat malaria by 2050
What it’s like to work in a nursing home during a pandemic
The deadline for the UK’s “Brexit” from the European Union is looming
Vox Sentences: The bad E in e-cigarettes
Trump's 'zero tolerance' immigration policy sparks outrage in Central America
US and Europe have a new normal: Monday’s coronavirus news