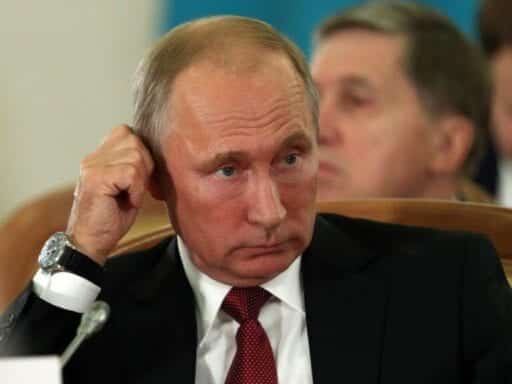 Trump doesn’t believe Russians interfere in US elections. His government does.

President Donald Trump evidently believes a wacky right-wing conspiracy theory that it was Ukraine — and not Russia — that actually interfered in the 2016 election (and to help the Democrats, not Trump). He’s also long questioned Moscow’s involvement, accepting Russian President Vladimir Putin’s denials that the Kremlin meddled in any way.

Which makes the Trump administration’s Monday announcement of new sanctions against Russia all the more striking. The new financial penalties impact seven Russian individuals and four entities — including property belonging to Yevgeny Prigozhin, more commonly known as “Putin’s chef” — over alleged interference in the 2018 midterm elections.

So although Trump himself doesn’t seem to think Russia is involved in election interference, his government clearly does.

“Today, the United States continued to take action in response to Russian attempts to influence US democratic processes,” Secretary of State Mike Pompeo said in a Monday statement. “Our clear warning: efforts by foreign actors to undermine democracy will face consequences.”

“This Administration will work tirelessly to safeguard our electoral process, and will aggressively pursue any other foreign actor that attempts to interfere in the 2020 elections,” Treasury Secretary Steven Mnuchin said in his own statement.

Neither official said there’s evidence Russians changed any votes or compromised election infrastructure. Rather, the Treasury Department said Kremlin-linked hackers known as the Internet Research Agency “used fictitious personas on social media and disseminated false information in an effort to attempt to influence the 2018 US midterm elections and try to undermine faith in US democratic institutions.” Prigozhin finances that group.

In September 2018, Trump signed an executive order warning countries they would face sanctions if they tried to meddle in any US election. Monday’s move is the first time the administration has taken any action under that rule.

On one hand, it’s not so remarkable that the US did this. Any nation would certainly punish another for trying to interfere in its democratic elections, and the Trump administration has sanctioned Russians many times before.

But to do this less than a week after the White House released a partial transcript showing Trump talking about a conspiracy theory linking Kyiv to 2016 interference — not Moscow — on a call with Ukraine’s president is incredibly jarring. It shows there’s a massive inconsistency at the heart of the Trump administration’s Russia policy and its messaging.

Trump, it seems, is the main reason why.

Trump was referring to a long-debunked conspiracy theory that the firm has covered up the fact that Ukraine — not Russia — interfered in the 2016 election. It’s a belief he continues to hold even though his top aides have repeatedly told him the theory had been debunked.

Here’s the background to his whole nonsense: CrowdStrike was hired by the Democratic National Committee (DNC) in 2016 to look into who hacked into their networks during the election. The firm determined that it was two Russian groups with Kremlin ties.

But here’s the problem: There is actually no missing physical server associated with the DNC breach. Instead, the roughly 140 servers — most of them cloud-based — are already out of use.

That’s incorrect. The company’s co-founder, the Russian-born US citizen Dmitri Alperovitch, is a senior fellow at the Atlantic Council think tank in Washington, which receives funding from Ukrainian oligarch Victor Pinchuk. But that flimsy connection is a far cry from the firm he started being secretly run by an Eastern European billionaire.

(Disclosure: Before coming to Vox, I worked at the Atlantic Council and interacted with Alperovitch on a few cybersecurity-related events and projects.)

CrowdStrike denied any wrongdoing in a statement to reporters issued last week: “With regards to our investigation of the DNC hack in 2016, we provided all forensic evidence and analysis to the FBI. As we’ve stated before, we stand by our findings and conclusions that have been fully supported by the US Intelligence community.”

It’s still unclear just where Trump got this idea in his head, but it’s ingrained enough that he mentioned it on a call with Ukraine’s president. Luckily, Trump’s own government will combat Russia despite what he believes.

In This Time of Social Change, Can a Brand Also Be an Ally?
This week in TikTok: How a dance goes viral
What the mass resignations at Deadspin tell us about work in America
Legend of Korra’s messy, complicated legacy
Social media is making a bad political situation worse
GOP senator shrugs off new evidence of Trump misconduct, contradicting his stance from hours earlier