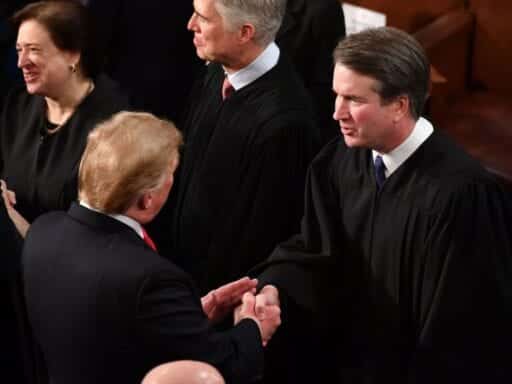 Share
Loading...
President Donald Trump shakes hands with Supreme Court Justice Brett Kavanaugh before delivering the State of the Union address at the US Capitol in Washington, DC, on February 5, 2019. | Mandel Ngan/AFP via Getty Images

Roe v. Wade doesn’t mean much if no one can sue to enforce it.

The Trump administration filed a brief in these cases last week, asking the Court to dramatically curtail reproductive choice. Much of that brief asks the Court to effectively ignore its decision in Whole Woman’s Health v. Hellerstedt (2016), which struck down an abortion restriction that is virtually identical to the one at issue in the June Medical cases. But the brief also offers a subtle and arcane argument involving the question of who is allowed to bring a lawsuit challenging laws restricting abortion.

Should this argument prevail — and there’s a good chance it will appeal to conservative justices who want to quietly roll back abortion rights while avoiding a political backlash — it would fundamentally alter the landscape of abortion rights. Its immediate effect would likely be to shut down suits challenging anti-abortion laws before those laws take effect (often, a new state law does not take effect until weeks or months after it is enacted).

On the surface, that may seem like a relatively minor inconvenience for abortion advocates, but the Trump administration’s argument could also form part of a two-pronged attack on abortion rights that could render them virtually useless.

Last February, Justice Brett Kavanaugh suggested he would impose a different procedural barrier on abortion plaintiffs, effectively preventing these plaintiffs from obtaining a court order that applies to anyone other than themselves. The combination of Kavanaugh’s proposed barrier and the one advanced by the Trump administration would be devastating to abortion rights.

In effect, this one-two punch against abortion plaintiffs could make it nearly impossible for anyone to obtain an abortion in states that bar the procedure.

The June Medical cases are a showdown over “TRAP” laws

For many years, retired Justice Anthony Kennedy was the Supreme Court’s “swing” vote in abortion cases. Kennedy typically voted to uphold restrictions on abortion, but he also ruled against laws that cut so deeply into the right to an abortion that they effectively eliminated it. This need to secure Kennedy’s vote produced an entire cottage industry of anti-abortion lawyers who tried to draft aggressive restrictions on abortion that, at least on the surface, appeared to be something other than an outright ban on abortion.

Abortion proponents deride much of this legislation as “targeted restrictions on abortion providers,” or “TRAP” laws. TRAP laws are abortion restrictions that superficially appear designed to make abortion safer for patients but actually do little more than make it harder for abortion clinics to operate.

In Whole Woman’s Health, Justice Kennedy provided the crucial fifth vote to strike down two provisions of a Texas TRAP law, including a provision requiring abortion providers to obtain admitting privileges at a nearby hospital before they can perform an abortion.

Admitting privileges are often difficult for abortion doctors to obtain. And they serve little purpose. As one federal judge explained, if a patient experiences complications from an abortion, a hospital “will treat her regardless of whether her abortion doctor has admitting privileges.” Moreover, as the Supreme Court explained in Whole Woman’s Health, such complications are exceedingly rare — studies indicate that they occur in “less than one-quarter of 1 percent” of first-trimester abortions.

June Medical involves a Louisiana admitting privileges law that is virtually identical to the one struck down in Whole Woman’s Health. Indeed, the most relevant distinction between the two cases has little to do with the law or the facts of either case. The most relevant distinction is that Kennedy is now retired, and his replacement — Kavanaugh — has a far more anti-abortion record.

But June Medical also places the justices in an awkward position. Because the law in June Medical is almost indistinguishable from the one struck down in Whole Woman’s Health, a decision upholding the Louisiana law would reveal that the outcome of major Supreme Court cases has more to do with who sits on the Court than what the law actually says.

Though a conservative lower court tried to argue that the Texas and Louisiana cases are factually distinguishable, this effort earned a sharp rebuke from Judge Patrick Higginbotham, a Reagan appointee, who accused his colleagues of ignoring the Supreme Court’s determination that “‘unnecessary health regulations that have the purpose or effect of presenting a substantial obstacle to a woman seeking an abortion impose an undue burden’ on the exercise of that right.”

And that brings us to the Trump administration’s procedural argument, which potentially gives the Supreme Court’s Republican majority a way to toss out this lawsuit without having to explicitly declare that TRAP laws are constitutionally acceptable.

The general rule in federal courts is that a plaintiff “must assert his own legal rights and interests, and cannot rest his claim to relief on the legal rights or interests of third parties.” Thus, because the constitutional right to an abortion belongs to the person seeking an abortion, the ordinary rule would require that person to be the plaintiff in any lawsuit challenging an abortion restriction.

But the Supreme Court also allows third parties to bring a lawsuit in limited circumstances — when “the party asserting the right has a ‘close’ relationship with the person who possesses the right” and “there is a ‘hindrance’ to the possessor’s ability to protect his own interests.” This doctrine is known as “third-party standing.”

Thus, the Court has historically allowed abortion providers to challenge laws restricting abortion under the third-party standing doctrine. As Justice Harry Blackmun explained in Singleton v. Wulff (1976), “the constitutionally protected abortion decision is one in which the physician is intimately involved.” And abortion patients may be hindered in their ability to assert their rights, in no small part because an individual seeking an abortion is likely to give birth before the scope of their rights is fully litigated.

Both Louisiana and the Trump administration ask the justices to strip abortion providers of their ability to bring such lawsuits — or, at least, to strip them of their ability to challenge laws like Louisiana’s TRAP laws. According to the administration’s brief, abortion providers should not be able to assert the rights of their patients because the providers’ interests are “potentially in conflict” with the interests of those patients.

The Trump administration claims the law at issue in June Medical “requires abortion providers to have admitting privileges in part as a prophylactic measure for the safety of women who obtain abortions.” Such a law obviously burdens physicians. But, at least according to the administration, the law “imposes no direct costs on [patients], and they may see its benefits as quite significant.”

One problem with this argument is that the Supreme Court already determined, in Whole Woman’s Health, that the health benefits of an admitting privileges law are minimal at best.

Another problem is that the administration’s argument assumes its own conclusion. The core legal question in June Medical is whether Louisiana’s law is a legitimate health regulation or a sham law enacted to shut down abortion clinics. But the Trump administration’s argument effectively requires courts to assume that Louisiana is telling the truth, and then use this assumption to kick physicians out of court.

As the plaintiffs argued in a brief to the Supreme Court, if this attack on third-party standing is embraced by the Court, “a state could negate an abortion provider’s third-party standing in any case, even if its proffered health and safety justifications for the challenged law were pretextual.” A state could require all abortion clinics to keep a stable full of unicorns, then strip those clinics of their right to challenge that law by claiming that unicorns help improve health outcomes.

As a practical matter, a decision stripping abortion providers of third-party standing would make it much harder to challenge abortion restrictions in court. Lawyers would have to track down an actual pregnant person who wants to get an abortion but is prevented from doing so by a state abortion restriction, and they’d need to convince this person to sign on as a plaintiff.

This inconvenience probably would not be enough to shut down abortion litigation entirely — Roe v. Wade, after all, was brought by an individual woman seeking an abortion. But an attack on third-person standing is one half of an agenda that could effectively destroy abortion rights.

The other half can be found in a dissenting opinion Kavanaugh wrote just a few months after he joined the Court, which argued that the Supreme Court should not have temporarily stayed the lower court’s decision upholding the Louisiana law.

Much of Kavanaugh’s opinion rests on a distinction between “facial” challenges to an unconstitutional law and “as applied” challenges. When the Supreme Court declares a law to be invalid on its face, that means the law ceases to operate altogether — it’s as if the law never existed. Whole Woman’s Health, for example, held that Texas’s admitting privileges law was facially invalid.

When a court strikes down a law as applied to a particular plaintiff, by contrast, that means the law cannot be applied in the specific circumstances that arose in that case. But the state may still be able to enforce the same law against other parties who are not before the court.

Kavanaugh suggested that a facial challenge to Louisiana’s TRAP law is not appropriate. Rather, plaintiffs must file an as-applied challenge if they wish to contest such a law.

Which brings us back to the question of third-party standing. If Louisiana and the Trump administration get their way in June Medical, that will mean abortion providers and clinics will no longer be able to bring lawsuits challenging many abortion restrictions — only individual patients will be able to do so.

Moreover, if Kavanaugh gets his way on facial and as-applied challenges — an outcome that four justices pushed for in Planned Parenthood v. Casey (1992) —that would mean that an individual patient challenging an abortion restriction would only be able to secure a court order allowing them and them alone to obtain an abortion. Someone seeking an abortion would need to find a lawyer, file a lawsuit, secure a court order, obtain the abortion, and do all of this before their pregnancy became so advanced that it was no longer legal for them to terminate it.

And that’s assuming they could still find an abortion clinic within their state. It’s not at all clear that abortion clinics could continue to operate if they were only allowed to treat patients who secured a court order.

In a world without a constitutional right to an abortion, reproductive choice becomes a privilege restricted to people of means. Wealthy individuals will still be able to fly to another state — or even another country — if they need to do so to obtain an abortion. They are also more likely to have the job flexibility they need to travel to a distant clinic. And should they encounter legal obstacles along the way, wealthy individuals will have a much easier time securing legal counsel.

Less well-off patients, meanwhile, will likely be forced to carry their pregnancy to term.

For these individuals, it won’t matter if they are denied the right to an abortion because that right is formally overruled, or because the Supreme Court has erected so many procedural barriers that it is impossible to vindicate the abortion right in court. In either event, the outcome will be the same.

Watch NASA launch the Parker Solar Probe toward the sun
Mark Halperin says his conduct has changed. His commentary is the same.
Trump’s new favorite poll inflates his approval rating by about 10 points
People are creating self-care plans to make Election Day more bearable
Giving Tuesday, explained
The best $2,000 I ever spent: many, many rounds of bingo