The Trump Foundation was a sham. We have no idea how many other foundations are, too. 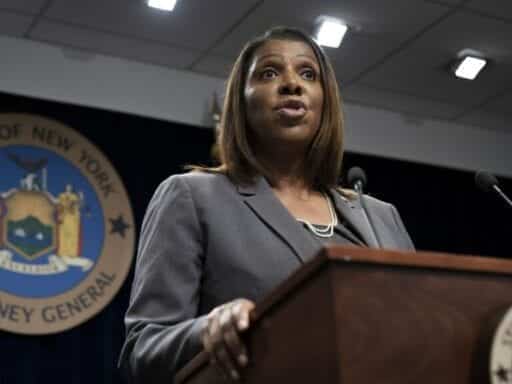 The foundation’s malfeasance was prosecuted, but most foundation wrongdoing is never even investigated.

The New York State attorney general’s case against the Trump Foundation — Donald Trump’s nonprofit that a court shut down earlier this year — has concluded. The Trumps have agreed to pay a $2 million fine, the attorney general’s office said in a press release on Thursday.

The deal follows years of incredible, careful reporting by a number of reporters but most of all the Washington Post’s David Fahrenthold. As Fahrenthold discovered, the Trump Foundation often operated as a slush fund for the Trump family and Trump’s businesses. It bought Trump an autographed Tim Tebow helmet, a portrait of himself, and money for various lawsuit settlements. Less entertainingly but perhaps more importantly, he also used a foundation fundraiser, which was nationally televised a few days before the Iowa caucuses, to promote his presidential bid in 2016.

Now, per the deal with the New York attorney general’s office:

The $1.78 million in assets currently being held by the Trump Foundation, along with the $2 million in damages to be paid by Mr. Trump, will be disbursed equally to eight charities: Army Emergency Relief, the Children’s Aid Society, Citymeals-on-Wheels, Give an Hour, Martha’s Table, United Negro College Fund, United Way of National Capital Area, and the U.S. Holocaust Memorial Museum. The charities — which were required as part of the resolution to be entities that did not have any relationship with Mr. Trump or entities he controlled — were approved by the Office of the Attorney General and the court.

It’s a fitting punishment: forcing a fake foundation that funneled money to bogus causes to actually use its money to benefit real charities. “My office will continue to fight for accountability because no one is above the law — not a businessman, not a candidate for office, and not even the president of the United States,” Attorney General Letitia James concluded in her statement.

It’s a nice sentiment, but it’s not true: Plenty of foundations are and remain above the law. The investigation into the Trump Foundation was unusual. There are some 86,000 foundations in the United States, with total assets of around $890 billion, and the vast majority of them never face this kind of scrutiny.

To be sure, this isn’t the first time the New York attorney general’s office has investigated a charitable group in recent years. But normally it appears to investigate sham charities (like two fraudulent Vietnam veterans charities, the Thoroughbred Retirement Foundation, and a fake leukemia charity), the kind of groups to which foundations donate rather than grant-making foundations themselves. It did crack down on the foundation affiliate of the UK-based Pearson education company for intermingling charitable and business funds and got Broadway producer David Richenthal to pay back the $500,000 he bilked from his family foundation.

But in those two cases, the punishments were pretty mild. Note that when poor people — as opposed to Richenthal — steal lots of money, just giving the money back isn’t usually enough to avoid prison. The attorney general got $7.7 million from Pearson, in a year when the company booked upward of $1 billion in profits (using exchange rates at the time). That’s less a punishment than it is a rounding error.

The Trump case is egregious, but it didn’t merely happen because Trump is seemingly prone to playing fast and loose with tax law. It happened because there are tens of thousands of foundations in the US, and they operate with little or no regulatory oversight — from state attorneys general, from the IRS, from anyone.

The fact that this one was founded and overseen by a presidential candidate who went on to win the presidency led to huge amounts of scrutiny from the press and the attorney general’s office. How likely was that to happen, absent Trump’s transition into politics? If there are dozens or hundreds of other foundations doing exactly the same thing, how would any of us know?

The problem of charitable foundations in a democracy

As the political theorist Rob Reich explains in his new book Just Giving, we really don’t expect much from foundations as a matter of public policy.

They don’t have to have a website or some other way for interested charities to contact them about funding. They don’t have to make their giving strategy publicly available or accessible in any way. They do have to fill out 990-F tax forms, which are public and provide some information on their assets, spending, and grant recipients. But those take the form of long, difficult-to-parse tax documents, and crafty philanthropists can get around these requirements by starting up offshore foundations. And there are basically no requirements to speak of beyond filing a 990-F and spending at least 5 percent of assets every year.

“Foundations are often black boxes, stewarding and distributing private assets for public purposes, as identified and defined by the donor, about which the public knows very little and can find out very little,” Reich writes.

This isn’t to say foundations are by definition nefarious. Most of them are probably fine. The point is we don’t really have institutions in place to tell us that.

Sometimes the foundations themselves give us useful signals that they’re on the level. A number of foundations are admirably forthcoming about their giving strategy and post comprehensive grant databases for anyone to inspect.

But our extremely light regulatory framework governing foundations makes it quite easy for a duplicitous actor to make a different choice from the transparent foundations, to exploit the wide latitude given to foundations to engage in double dealing and fraud and evade scrutiny. It’s a symptom of a broader cultural and legal failing, wherein white-collar crimes by wealthy elites are systematically under-investigated, underexposed, and under-punished. If Trump has exploited that failing, then others probably have as well.

I don’t have a solution to this general problem. More funding for investigators devoted to dissecting foundations the way Fahrenthold and the attorney general’s office have would be a good start. It might help deter more wrongdoing as more duplicitous foundations learn that they could get caught.

But it would be a real shame if our lesson from the Trump Foundation is just “Trump is bad.” The lesson ought to be, “Foundations can be bad, and we don’t have a system in place to hold them accountable.”

Do you ever struggle to figure out where to donate that will make the biggest impact? Or which kind of charities to support? Over five days, in five emails, we’ll walk you through research and frameworks that will help you decide how much and where to give, and other ways to do good. Sign up for Future Perfect’s new pop-up newsletter.

No, Trump hasn’t been the best president for Black America since Lincoln
This video clip shows how Trump defenders have dramatically moved the misconduct goalposts
7 provocative documentaries that show how our political process has evolved
How Cersei’s hired army, the Golden Company, could make or break Game of Thrones’ next battle
The real reasons Democrats want open impeachment hearings
Trump went to Louisiana to stump for local Republicans. He ended up attacking national Democrats ins...