The Trump-Ukraine scandal just got its Watergate tapes moment 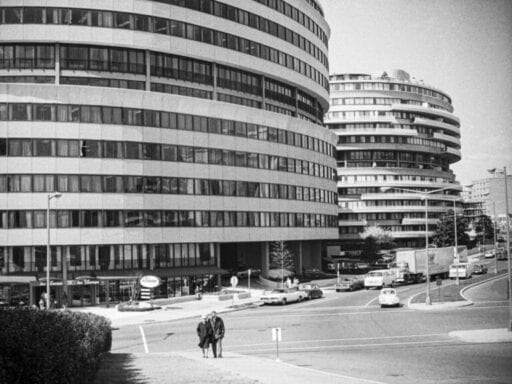 Share
Loading...
The Watergate Complex has became associated with the infamous political scandal that bears its name, in 1969. | Bettmann Archive/Getty Images

Nixon had tapes. Trump has transcripts.

The anonymous whistleblower complaint about Donald Trump’s request that the president of Ukraine investigate Joe Biden’s son contains a number of stunning charges.

One of them is the allegation that White House officials moved what the whistleblower describes as the “official word-for-word transcript” of Trump and the Ukrainian president’s call to a “separate electronic system that is otherwise used to store and handle classified information of an especially sensitive nature” — even though a White House official said the call contained no sensitive national security information.

It gets worse: “This was ‘not the first time’ under this Administration that a Presidential transcript was placed into this codeword-level system solely for the purpose of protecting politically sensitive — rather than national security sensitive — information.”

The allegation, to be clear, is that the Trump administration has been stashing transcripts of normal phone calls Trump made in a highly classified storage system so that they don’t get out and embarrass the president.

It’s an action that raises plenty of troubling follow-up questions: Which other phone call transcript or transcripts are in that system? Who was Trump talking to? Why did Trump and his political advisers think the records had to be kept under lock and key? Do they contain anything like Trump’s efforts to pressure Ukraine to investigate the Biden family — essentially, to get a foreign power to assist him in the 2020 presidential campaign? Or do they contain evidence of something even worse?

Reporters and analysts who’ve been covering Trump’s foreign entanglements for years immediately latched on to this as a key allegation in the complaint. “This just got much bigger,” Greg Miller at the Washington Post declared. “This to me is most significant and what carries the news cycle for many days to come — what ELSE has the WH inappropriately put on a classified system?” NPR’s Tim Mak added.

One reason the alleged transcript vault feels like such a profound revelation is that it’s an echo of one of the biggest moments in the Watergate investigation. A key turning point came in July 1973 when Alexander Butterfield, a former aide in the Nixon White House, told investigators and then Congress that the president had a recording system in all his offices in the White House that taped his conversations.

The importance of the Watergate tapes

Leon Neyfakh’s Slow Burn podcast has a great episode on this moment. The revelation came almost by accident — as an afterthought. (Similarly, the note that this isn’t the first time the Trump administration has classified records of a presidential phone call was in the complaint’s appendix.)

Butterfield casually mentioned to Scott Armstrong and Don Sanders, two lawyers for the Senate Watergate Committee, as Armstrong recalls it, “I guess you guys must already know: The president has an automatic taping device in each of his offices.” Armstrong and Sanders did not know this nor did basically anyone else.

Within days, after Butterfield testified publicly before the committee, the whole country knew it.

Neyfakh includes a telling quote from a column written by Mary McCarthy at the time capturing the public mood: “The moral shock of learning that Nixon had been bugging … anybody who approached his offices … lost some of its impact in the general joyful feeling that the case was going to be resolved.”

For the next year or so, the Watergate fight became almost wholly consumed by the question of the tapes: who had access to them, in what way they could have access to them, and what their contents meant to the investigation.

Archibald Cox, the special prosecutor investigating the Watergate break-in, secured a subpoena forcing the White House to release the tapes, but Nixon refused to comply. On October 12, the DC Circuit Court of Appeals upheld the subpoena, effectively ordering Nixon to hand over the tapes. Nixon responded by offering Cox a compromise: John Stennis, a conservative Democratic senator from Mississippi, could listen to the tapes and verify they matched transcripts of them released by the White House. But Stennis was notoriously hard of hearing, and Cox would not agree to the deal.

So ultimately, Nixon decided to have Cox fired. He wound up firing both his attorney general and his deputy attorney general when they refused to fire Cox in an event now known as the Saturday Night Massacre, which outraged the public so deeply that Nixon’s advisors pushed him hard to appoint another prosecutor. He did, picking Texas Democrat Leon Jaworski.

Jaworski had to appeal all the way to the Supreme Court, but in a unanimous ruling on July 24, 1974, the Court mandated the White House release the subpoenaed tapes. The White House finally complied, and on August 5, it released what became known as the “smoking gun” recording, in which HR Haldeman and Nixon, days after the break-in, discuss using the CIA to hamper the FBI’s investigative efforts. Three days later, Nixon resigned.

The tapes also famously included an 18.5-minute gap on June 20, 1972. The minutes are believed to include a conversation between Nixon and Haldeman about the Watergate arrests. Rose Mary Woods, Nixon’s secretary, claimed that she accidentally erased the portion, but due to how the taping system worked, it would have been almost physically impossible to do so.

Most plausible, according to Watergate reporter and expert Elizabeth Drew, is Nixon aide John Ehrlichman’s allegation that Nixon personally erased the tapes, presumably because they contained yet more discussion of a cover-up.

The analogy to Quid Pro Kyiv

This brings us to the Ukraine scandal. The transcript vault mirrors, almost eerily, the White House tapes in its importance.

One caveat here is that the whistleblower complaint describes an “official word-for-word transcript.” The memo the White House released is formatted like a transcript, but it was complied from voice-recognition software and notes from people who listened to the call; it is not a verbatim record of what was said. The complaint suggests that a real transcript separate from the memo exists, hidden away in a classified storage system — but it was written before the White House memo was released, so it doesn’t explicitly distinguish between the two.

A truly word-for-word transcript could resolve definitely how explicit Trump was in demanding an investigation into Biden as a quid pro quo for arms sales and other aid to Ukraine. The possibility is strongly suggested by the readout of the call released by the White House, but a full transcript could be more damning if it includes more explicit transactional language. It could serve as a “smoking gun” transcript just as the conversation with Haldeman was the “smoking gun” tape of the Watergate scandal that forced Nixon’s resignation.

But there are other parallels too. The Nixon administration fought tooth and nail to prevent the tapes’ release. Similarly, the high level of classification placed on the transcript vault — or, more precisely, the choice to stash the transcripts in a system that required code-word clearance to access — suggests that the administration won’t give the Ukraine transcript up easily, even in response to a Congressional subpoena. With Robert Mueller’s investigation over, there is no special counsel to fight for the transcript’s release alongside Congress. But the subpoena power of Democratic committee chairs in the House could on its own augur such a fight.

Finally, both the tapes and the transcript vault could contain multitudes. The White House tapes proved not only that Nixon was involved in covering up the Watergate break-in, but that he was a vicious anti-semite who traded conspiracy theories with his aide Henry Kissinger, and that then-California Gov. Ronald Reagan went on a racist rant to Nixon assailing “those monkeys from those African countries” at the UN.

The transcript vault, per the whistleblower, doesn’t just contain the Ukraine transcript. There’s more where that came from. We could be only at the beginning of the process of discovering all that’s there to find.

Race is still the central dividing line in the Democratic Party
Food delivery and takeout are on the rise. So are the mountains of trash they create.
We caught a cosmic ray, one of science’s biggest mysteries
Trump’s tall tale about the military being out of ammunition shows how his lies evolve
The Malignant Narcissism Of Donald J. Trump: An Interactive Checklist
Rep. Jim Clyburn has been here before