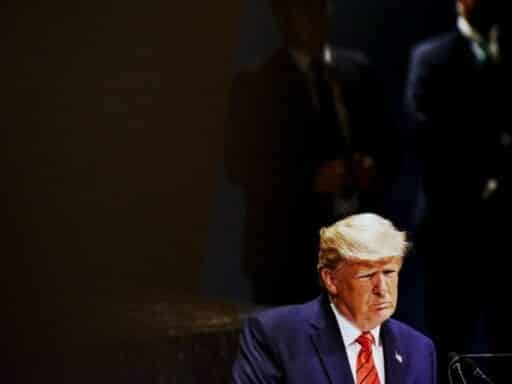 Everything we know so far suggests the whistleblower’s account was right on target.

The whistleblower complaint that suddenly placed Trump in the greatest danger of impeachment of his presidency so far has now been revealed.

The key allegation is stated up front: “I have received information from multiple U.S. Government officials that the President of the United States is using the power of his office to solicit interference from a foreign country in the 2020 U.S. election,” the whistleblower wrote, in a letter dated August 12, 2019. (You can read it at this link.)

The well-written, detailed, and footnoted complaint alleges a months-long effort by President Trump and his lawyer Rudy Giuliani to pressure the government of Ukraine to investigate Joe Biden and his son Hunter. Some parts of that pressure campaign played out in public view, and others of which happened behind closed doors.

The centerpiece of the complaint is the whistleblower’s recounting of what transpired during Trump’s July 25 phone call with Ukrainian President Volodymyr Zelensky. But it also describes an apparent White House cover-up to hide records of that call, and lays out other troubling events that occurred both before and after that call.

The whistleblower admitted that they were “not a direct witness to most of the events described,” but were rather “informed” of these various facts by “more than half a dozen U.S. officials” in the course of their work. But the whistleblower’s information appears to be quite good — on Wednesday, the White House released an internal document summarizing the Trump and Zelensky call that closely matches the whistleblower’s description.

The biggest new revelation is the whistleblower’s allegation that, per White House officials, White House lawyers “directed” them to remove the word-for-word transcript of the Trump and Zelensky call from the usual computer system. Instead, they placed it in a separate computer system reserved for very sensitive intelligence information — in an apparent effort to prevent word of what actually happened on the call from getting out.

The overall takeaway is that, based on what has already emerged, many if not most of the whistleblower’s allegations were right on target. Trump did try to get a foreign leader to investigate his potential opponent in the 2020 election. The questions remaining are about how wide-ranging this effort was, and what the White House did, if anything, to cover it up. (As well as, of course, whether all this merits impeachment.)

Who is the whistleblower, and what does this complaint look like?

We don’t know who this whistleblower is — only that he or she is a member of the US intelligence community. But, judging by the complaint, the person appears to regularly discuss policy toward Ukraine with other US government officials, and hears quite a lot about internal deliberations within the White House and State Department on this subject.

The complaint itself is nine pages long. It’s addressed to Sen. Richard Burr (R-NC) and Rep. Adam Schiff (D-CA), the chairs of the House and Senate intelligence committees, but was submitted to the inspector general for the intelligence community, in accordance with a law governing intelligence whistleblower complaints.

Interestingly, the whistleblower appears to have anticipated an attempt to suppress the complaint. The complaint was written so that the first seven pages would be unclassified, with classified information only included in a separate two-page “enclosure.” Early on, the whistleblower mentions the possibility that the administration could try to classify more information retroactively — and says in that case, it would be “incumbent upon the classifying authority to explain why.”

In the end, the version of the complaint declassified and publicly released Thursday was almost entirely unredacted. That includes that two-page classified enclosure — except for one brief section and its accompanying footnote or footnotes. Those are blacked out and marked as related to “classified intelligence community reporting and analysis.”

After that brief introduction, the whistleblower launches into a detailed description of Trump’s now-infamous July 25 call with the new Ukrainian president, Volodymyr Zelensky.

The whistleblower did not hear the call or review the transcript, but he or she did “receive a readout” of it and talk to numerous White House officials about it — and those White House officials were “deeply disturbed” about what happened, because they had “witnessed” Trump “abuse his office for personal gain.”

Some Trump defenders have seized on the whistleblower’s lack of firsthand knowledge about the call — but the criticism doesn’t really hold water, since the White House released their own internal document summarizing the call Wednesday, and it closely matches the whistleblower’s description.

The whistleblower alleges what we now know from that document to be true:

Again, all this is not even disputed at this point. Here, for instance, is Trump requesting Zelensky work with Barr to investigate Biden and his son, per the (non-verbatim) official summary of the call.

So the whistleblower was on target here. Similarly, the (again, non-verbatim) call summary shows Trump asked Zelensky to talk to Barr or Giuliani at least five separate times regarding these investigations.

But the whistleblower’s complaint is broader than just one phone call — it goes on to make allegations of an apparent White House cover-up around the call, and then it tries to put Trump’s behavior toward Ukraine in broader context.

“In the days following the phone call,” the whistleblower continues, “I learned from multiple U.S. officials that senior White House officials had intervened to ‘lock down’ all records of the phone call, especially the official word-for-word transcript.”

Specifically, he or she says, White House officials say they were “directed” by White House lawyers “to remove the electronic transcript from the computer system in which such transcripts are typically stored for coordination, finalization, and distribution to Cabinet-level officials.”

Instead, the transcript was placed in a “separate” electronic system intended for “especially sensitive” material. The goal here appears to have been to ensure that the transcript didn’t circulate widely within the government. But, per the whistleblower, concerns were voiced internally that this was an “abuse” of the system, designed to protect Trump politically. And according to White House officials, the whistleblower complains, this was “not the first time” the system was used in this way to shield a politically damaging “Presidential transcript.”

One question here is whether the “official word-for-word transcript” of the call the whistleblower is referring to is the same call summary document that was released on Wednesday by the White House. That document is written like a transcript, but it has a note stating it’s not a verbatim transcript, and also contains ellipses in certain sections. (The White House has said these are meant to be conversational pauses.)

So there are two possibilities. One is that the whistleblower was being inexact in referring to a “word-for-word” transcript, and we already have the document in question. The other is that there is still an exact word-for-word transcript hidden away somewhere. (The released summary document was allegedly “developed with assistance from voice recognition software,” so apparently there was audio used at some point.) Either is possible, and it would be good to find out which is the case.

Beyond that, there are naturally more questions to be asked about which White House officials were involved in this apparent cover-up — and whether there were in fact other times Trump call transcripts were hidden away for political reasons, as the complaint alleges.

Finally, the complaint spends several pages laying out the context for Trump’s call with Zelensky — telling a damning story, based partly on public events and partly on nonpublic information, about a concerted pressure effort.

The whistleblower traces the saga back to March 2019, when Ukraine’s then-prosecutor general, Yuriy Lutsenko, made a series of allegations to an American conservative journalist, John Solomon of The Hill. These allegations were about the two main topics Giuliani wanted to investigate — how the FBI’s Russia investigation got started, and the Biden family’s Ukraine dealings.

The whistleblower suggests these allegations were garbage. “Mr. Lutsenko has no legal training and has been widely criticized in Ukraine for politicizing criminal probes and using his tenure as Prosecutor General to protect corrupt Ukrainian officials,” he or she writes. The implication is that because Lutsenko was about to lose his job as prosecutor general — due Zelensky’s lead in the polls — he was making up nonsense to try and get the Trump administration to help him keep his job.

But all this was exactly what Giuliani wanted to hear. As the whistleblower chronicles, Giuliani bragged repeatedly in media appearances that these Ukrainian investigations were bombshell news. Unfortunately for him, though, Zelensky won the election — and he had pledged to fire Lutsenko as prosecutor general.

That’s the background for Trump and Giuliani’s effort to put the squeeze on Zelensky, and demand his administration keep pursuing the investigations that could help Trump politically. Per the whistleblower:

The complaint also mentions — briefly — the questions surrounding Trump’s decision to block US military aid to Ukraine. The whistleblower didn’t know many details about this, but mentions the move as potentially connected to Trump’s efforts to pressure Zelensky.

The document summarizing Trump and Zelensky’s July call revealed that the topic of US military aid for Ukraine was in fact brought up in their discussion — right before Trump asked Zelensky for a “favor.”

Finally, the whistleblower adds some further details on what happened after that July 25 call. Specifically, on the next day, two US State Department officials — Kurt Volker, the special representative for Ukraine negotiations, and Gordon Sondland, the US ambassador to the EU — met Zelensky and advised him how to “navigate” Trump’s demands. The whistleblower also says that Giuliani met a Zelensky adviser in Madrid about a week later, something that was not public at the time (but has since been confirmed).

The whistleblower also describes an August 9 public statement from Trump to reporters, in which he called Zelensky a “reasonable guy” and suggested he would be invited to the White House soon. And that appears to have been the final straw — because he or she filed this complaint just three days later.

Child care is broken. Biden has a plan to fix it.
Joe Biden didn’t claim victory on Friday — but he urged Americans to be patient
Wonder Woman 1984 will debut on HBO Max this Christmas
The Terror: Infamy turns America’s WWII internment camps into a bleak ghost story
Former Rep. John Conyers — the longest-serving black congressman — dies at 90
The Supreme Court’s legitimacy crisis is here