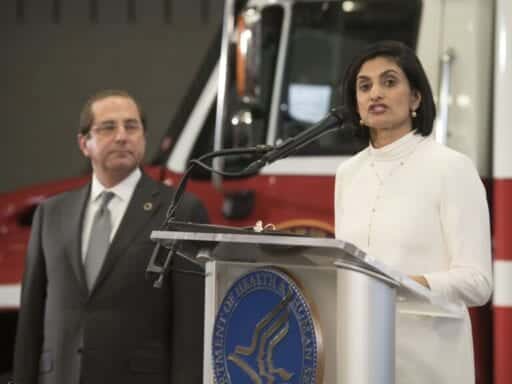 Alex Azar and Seema Verma were called to the White House to settle their feud.

Like two troublesome students being pulled into the principal’s office, President Trump’s top two health officials were called to the White House on Wednesday for a mediation. The message they received from Vice President Mike Pence and White House Chief of Staff Mick Mulvaney was simple, per reports: They need to figure out a way to get along.

Health and Human Services Secretary Alex Azar and Medicare and Medicaid chief Seema Verma have been engaged in a public power struggle over the last year, with each seemingly seeking to undermine the other both on policy and in the press. The feud has stifled Trump’s health agenda and created another turf war between two bureaucrats in an administration largely defined by its interpersonal conflict.

The dispute is in part about personal issues: Verma’s complaints prompted the health department to hire a lawyer to investigate claims of sexual discrimination (none was found), and her side blames Azar’s for damaging leaks about her spending on public relations.

But it’s also about policy: Verma has undercut Azar’s plans to rein in drug prices, a top Trump priority, while Azar disparaged Verma’s proposal to replace the Affordable Care Act.

The conflict is one reason Trump’s health care record is an unwieldy combination of undercooked, headline-driven initiatives to bring down costs and legally dubious attempts to cut the safety net.

Trump’s agenda has been torn from the start between his populism on the campaign trail, when he attacked pharma and promised he would never cut Medicaid, and the ideological conservatism of his actual administration, which became the first to pursue Medicaid work requirements and block grants. It’s been hard to pick a path and stick to it with his two lieutenants undermining the other on their respective issues.

Experts say the cost initiatives, like a recent price transparency regulation, are doubtful to have a big effect. His conservative policies, like the work requirements and a rollback of Obamacare’s contraception rules, have been held up in the courts over shoddy legal theory. There is still no plan to replace Obamacare that could pass a Republican Congress.

Trump has never been too concerned with the details of health policy — his defining statement was how “complicated” it all is. Now his agenda is stuck in the mud while his top two officials sling it in the Washington press. For people worried a Trump agenda would mean more uninsured people and higher costs to patients, the incompetence might be a blessing in disguise. For Trump, eager to counter the Democratic message on health care, it’s a calamity.

Unusual circumstances helped breed the spat between Azar and Verma, which was long rumored but burst into the open in the past few weeks, reaching a crisis point demanding of a White House intervention.

The governance structure at the Health and Human Services Department is ripe for conflict, with two leading officials of nearly equal authority. The secretary, Azar, oversees the entire department. The administrator of the Centers for Medicare and Medicaid Services administrator, Verma, is second in command (Verma), but also directly oversees two of the biggest federal programs.

Verma, who had most recently advised Pence on his Medicaid expansion plan as Indiana governor, had enjoyed a remarkable degree of independence before Azar arrived at HHS. She was part of the Pence-affiliated crew that asserted itself at the health department from the first days of the Trump administration. She was arguably the face of the Trump health care agenda, especially after Trump’s first health secretary, Tom Price, was forced to resign over expensive charter flights in September 2017.

She announced the plan for Medicaid work requirements, a major conservative priority, in January 2018 before Azar came on, and assumed the lead role in rolling back Obamacare through administrative action, which also fell under her purview as the head of CMS.

So Verma had assumed a significant role before Azar was confirmed by the Senate as Price’s replacement in late January 2018 and was pursuing an ideologically conservative agenda.

Then Azar came in with his own apparent writ from Trump: bring down drug prices. It was an unlikely role for a pharma executive, but it also gave Azar a mandate to take over on one of Trump’s top priorities. The new secretary had an opening to seize control of the department agenda from his top deputy.

The tension wasn’t immediately out in the open, but there were rumors. One health care lobbyist I spoke to in August 2018, about six months after the new status quo, blamed the tension on clashes between staff left over from the Price era and the incoming Azar staffers.

We would later learn from Politico that Verma had also accused her previous boss of creating a hostile work environment. But her feud with Azar would accelerate even further, necessitating this week’s White House sit-down.

Over the last year, Politico has released a series of damning reports raising questions about Verma’s spending on public relations. The CMS administrator has spent millions of dollars on private consultants to bolster her work and public image, a practice ethics scholars saw as potentially problematic and agency officials anonymously criticized:

And whether the issue was Medicare, Medicaid or Obamacare, prior heads of the agency were often quoted, profiled and in the news, so current officials said they’re puzzled why so much work is being outsourced.

“The head of Obamacare doesn’t need outside consultants to get reporters to talk to her,” said one CMS official, who asked for anonymity. “The job pitches itself.”

Another story in Politico last week revealed Verma sought $47,000 in reimbursement from taxpayers for jewelry that was stolen from her in San Francisco, including an Ivanka Trump-branded pendant. (She ultimately got less than $3,000.)

For her part, Verma believes she is the target of a smear campaign, per the Washington Post, all but accusing Azar of trying to drive her out with negative press:

Verma and her backers believe she has become the victim of a “smear campaign” involving “strategic leaks coming from inside HHS,” said one person familiar with the perspective of her agency.

Axios reported that Verma’s complaints prompted HHS to take the “extraordinary” measure of bringing in outside counsel to investigate sex discrimination in the department. Verma was apparently angry that Azar’s camp objected to the chief of staff she planned to fire and filed a complaint. The investigation didn’t find any evidence of discrimination, according to Axios, but did raise questions about Verma’s management style.

There were also reports that Azar had purposefully prevented Verma from accompanying Trump on an Air Force One flight, though HHS denied it, as they have most of the reports of tension between the two.

“Secretary Azar’s and Administrator Verma’s top priority is to advance the President’s healthcare agenda through lowering drug costs, advancing competition in the marketplace, and ensuring Americans have access to high quality, affordable healthcare,” a department spokesperson said in an email.

But the disagreements extended well beyond bureaucratic tactical warfare. The personal animosity has left the administration’s policy-making paralyzed too.

The relationship between Azar and Verma really started to deteriorate over a policy disagreement, according to the Washington Post. Azar had come into HHS charged with bringing down drug prices. It was a big campaign promise from Trump, who had called for more interventionist policies, like having the federal government negotiate directly on drug prices, but a difficult one to fulfill, because conservatives tend to like to let the market work unfettered.

Azar was supposed to have an advantage in executing this agenda because he came from inside the industry. And he focused initially on pharmacy benefits managers, the shadowy middlemen between drug makers and patients, proposing to end rebates PBMs get through Medicare.

But Verma and one of her top allies in the White House, top domestic policy aide Joe Grogan, opposed the plan at a White House meeting earlier this year because they said it would raise Medicare premiums. Per the Post:

Trump subsequently killed the proposal. Verma and Azar’s relationship deteriorated after the meeting, people close to them said.

Other more aggressive drug pricing interventions, like allowing importation from Canada and setting prices in the US based on prices in other countries, have also been scuttled by internal divisions.

Verma, on the other hand, is blamed by DC insiders for Trump’s Medicaid work requirements being blocked in harshly written court orders and other questionable policy moves, like an abrupt end to Obamacare insurer payments that was swiftly reversed after industry outcry.

Azar, for his part, reportedly criticized Verma’s plan to replace Obamacare in front of Trump. He didn’t like that the plan maintained federal subsidies for people to purchase private insurance, one of the central provisions in Obamacare itself. Trump continues to promise that a new health care plan is forthcoming, but his administration has resorted to repurposing the Graham-Cassidy plan that doesn’t have enough support to pass the Senate and would leave to millions of people losing health coverage.

The details of the rift are juicy. But the two officials are still pushing ahead with their own policy agendas. Azar is pushing price transparency, Verma advancing Medicaid block grants. The quarrel is not just a string of embarrassing headlines or an uncomfortable White House meeting — it has materially slowed down the Trump agenda on one of voters’ top issues.

SNL’s cold open asks if anything in America still works
The Mystifying World of TikTok Home Tours
Vox Sentences: Impeachment TV
Study: Biden can unite progressives and swing voters with a focus on climate
Watch: Trump and Putin start their historic meeting in Helsinki with a handshake
Walmart just got hit with a major gender discrimination lawsuit