The two-party system is killing our democracy 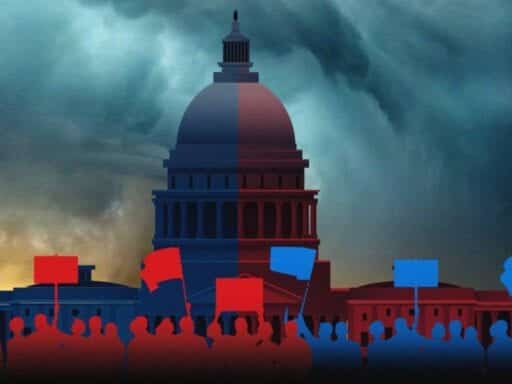 Here’s a long-shot idea to fix our system and make our democracy more democratic.

There is nothing inevitable about our dysfunctional government.

There is no good reason why our national political institutions should descend into zero-sum hyper-partisan trench warfare, or why we should experience yet another year of existential political dread, fearing that if our side loses the 2020 election, America will be irrevocably broken.

The reason we are in this mess is because we now have, for the first time, a genuine two-party system. We’ve had two major parties for a long time, but for many decades Republicans and Democrats weren’t cleanly split. Some liberals inhabited the GOP; some conservatives called themselves Democrats. The two parties contained enough multitudes that American politics functioned sort of like a multiparty democracy in practice.

That’s all changed. We are now in an era in which we have two truly distinct national parties, organized around two competing visions of national identity. It works against, not with, our political institutions. It’s a disaster and it’s driving us all crazy.

The way out is to replace our current two-party system with a system that represents the true diversity of Americans — a multiparty system that’s more fluid and responsive to Americans’ political preferences and that dissolves our binary partisanship.

To get there, we need to change the way we elect our representatives. Instead of holding elections in congressional districts where the single candidate who gets the most votes wins, we need to move toward a proportional representation system, currently used in many advanced democracies. In such a system, if a party gets 40 percent of the vote in a state, then 40 percent of that state’s congressional delegation will represent that party — straightforward and intuitive.

Our two-party system is largely a product of our antiquated voting process. We have plurality voting in the US — that is, the winner is whoever gets the most votes in the field even if they don’t nab a majority of the votes. For example, if candidate A gets 49 percent of the vote, candidate B gets 48 percent, and fringe candidates combine for the remaining 3 percent, candidate A is the sole winner — even though 51 percent voted against them.

But nothing in the Constitution requires this system. Congress could pass a bill tomorrow changing how we vote.

Change won’t happen overnight. And yes, change of any kind at all seems unlikely. But big democracy reforms have happened throughout American history. Women’s suffrage, the direct election of senators, the Voting Rights Act – all these were at some point improbable notions. They happened when citizen dissatisfaction rose to unsustainable levels and crystallized into demand for specific reforms.

We are in a new age of dissatisfaction. More and more Americans are afraid for our political future. Our democracy is flashing warning signs; all-or-nothing hyper-partisanship is destroying the overarching norms of democratic stability, mutual toleration, and forbearance. This is exactly how democracies die.

In a democracy, we need to be able to agree to disagree, and agree on a fair process to resolve what we disagree about. Self-governance depends on electoral losers accepting their losses, and on electoral winners giving the losers the freedom to dissent and criticize, and a fair chance to compete in the next election.

Hyper-partisanship threatens all this by raising electoral stakes to impossible heights, and making the other party seem so extreme and dangerous that the thought of them winning is simply unacceptable.

Understandably, many on the left believe the problem is simply the Republican Party, and if only Democrats could win decisive majorities, American democracy would work better. After all, Republicans have pushed a much more aggressive version of “constitutional hardball” — they’ve pursued partisan gerrymandering more enthusiastically, they’ve actively impeded the ability of Democratic constituencies to vote, and they broke precedent by not giving a sitting president the opportunity to get even a hearing on his Supreme Court nominee.

But given the evenly balanced strength of the two parties nationally, and the ways in which the Senate and the Electoral College are biased toward the rural party (generally Republicans), Democrats are not likely to win decisive majorities any time soon. Even if you believe Republicans are the problem, the two-party system ensures that Republicans can keep doing what they are doing simply by virtue of being the only viable alternative for voters who can’t see themselves as Democrats.

Moreover, the idea that if only one party could gain the permanent upper hand is itself a perpetuation of the doom loop. And yet, it’s a natural and sensible reaction to current politics, if you think that we’re stuck with our two-party system.

The way out of the crisis is to break the zero-sum doom loop of hyper-partisanship. That means having more than two parties, ideally between four and six — enough to represent the ideological diversity of the country, and offer enough space for different coalitions and alignments, but not so much fragmentation to render coalition formation overly difficult and overwhelm voters with too many choices.

Instead of the current system, I propose that we elect representatives in multi-winner, proportional elections, in which multiple members of Congress represent an electoral district, and parties’ share of seats more closely reflects their share of votes. Multiple parties can thrive because they don’t need to win a plurality in order to get representation.

With ranked-choice voting, voters indicate their preferences by ranking their candidates on the ballot. If your top choice is the lowest vote-getter when the votes are first counted, that candidate gets crossed off — but your number two choice then gets counted. In the single-winner version, candidates then get eliminated from last place up, until one candidate emerges with a majority. In a multiple-winner system, say five, the process ends when five candidates remain (after all vote transfers are completed).

For president, I’d replace the Electoral College with a national ranked-choice voting election. Here’s how it might play out: We might see at least two parties running candidates on the left, one represented perhaps by Sen. Bernie Sanders, and another represented by former Vice President Joe Biden, and at least two parties running candidates on the right, one represented by President Donald Trump, another represented by former Ohio governor John Kasich (or another more centrist Republican). We might see more candidates, too. With ranked-choice voting, candidates would reach out to each others’ supporters, promising broad governing coalitions in exchange for second-choice preferences.

Changing the way we vote to allow for more parties might seem radical, but it really shouldn’t.

First, it’s the hyper-partisan two-party system of the last decade that marks the true deviation from our history. America has had something more like a multiparty democracy within its two-party system for most of the country’s history. Conservative Oklahoma Democrats and liberal Illinois Democrats were once in Congress alongside liberal Vermont Republicans and conservative South Carolina Republicans. Depending on the issue, they formed different kinds of coalitions.

Second, proportional, multiparty democracy is the norm among advanced democracies, and has been for over a century. Yes, it’s true that under such systems, parties sometimes struggle to build governing coalitions. But that’s politics. Compromise and coalition-building are always hard. But because multiparty systems require both to form a government, parties eventually figure it out.

Proportional multiparty democracy would likely increase voter turnout. US voter turnout has long been at the bottom of OECD countries, despite countless efforts to improve participation. But perhaps our low participation shouldn’t be that surprising. Our two-party single-winner elections generate lots of lopsided districts where residents’ votes are irrelevant. When your vote is irrelevant, why bother?

Under proportional representation, by contrast, all votes matter equally. If the party you support gets 30 percent of the vote in your state, it doesn’t mean you get to send zero representatives — it means 30 percent of your state’s congressional delegation will be composed of the party you supported. Because all votes matter, parties and candidates have more incentive to mobilize more voters.

Third, multiparty democracy shouldn’t seem radical because it embodies the same values — fluid compromise and flexible coalition building — that the Framers, particularly James Madison, saw as essential to self-governance. The Framers despised political parties, but what they really feared was a binary two-party system. They feared that if just one party became the majority, it would use its power to abuse the remaining minority party, and that close two-party competition would be destabilizing. They were spot-on.

Reform is hard, but not impossible

Maybe you’re thinking: Okay, that all makes sense. But c’mon: We can barely pass a budget on time. How are we going to upend our entire voting system?

We’re not — at least not immediately. The electoral reforms I propose would be a major change. And it would take a broad social movement and lots of public pressure to help bring about change.

But the seeds for reform need to be planted first.

Change is already taking root at the state and local levels. Maine adopted ranked-choice voting in 2018. New York City adopted ranked-choice voting in 2019, joining several other major cities, and Massachusetts may adopt it in 2020. Democracy reform in the US has almost always been a state-led process. And there are plenty of state-level opportunities.

Moreover, the history of American democracy is also a history of reform. We’ve repeatedly changed our voting rules, making our democracy more inclusive and representative. The primaries, direct elections of senators, and single-member districts were all affirmative reforms that changed American democracy.

In the first two decades of the 20th century, most Western European democracies adopted proportional representation. Though each country had its own distinct path, in each country a majority of democratically elected representatives moved to a different voting system because they thought it would be an improvement over the status quo. In the 1990s, New Zealand ditched first-past-the-post elections and adopted a version of proportional representation, responding to massive public discontent with the existing system.

Reform is always unlikely. But moments do arise when the case for reform becomes so clear, and the demand so high, that it becomes only a matter of time before the right spark catches and reform seems inevitable.

Perhaps our current discontent is combustible enough for that coming spark. Dissatisfaction with and distrust in our current political system is at its highest levels in the history of modern polling, and probably comparable to levels in the lead-up to the Progressive Era. The raw material for a major democracy reform movement exists.

But it is still inchoate. That means it will depend on what we all do to help it grow and develop. The first step is understanding just how dangerous the status quo would be, if left to continue its democracy-destroying doom loop.

Lee Drutman is a senior fellow in the Political Reform program at the think tank New America, co-host of the Politics in Question podcast, and author of the new book, Breaking the Two-Party Doom Loop: The Case for Multiparty Democracy in America.

The Putin summit may backfire on Biden
The thankless task of social distancing
Colonial Pipeline finally admits it paid hackers millions in ransom
The United Kingdom’s contact tracing app could be a preview of America’s digital tracing future
In Netflix’s Get Me Roger Stone, the notorious GOP operative plays both narrator and villain
New Beyoncé, a Netflix teen rom-com, and other stuff we loved this week