The UK backs away from “herd immunity” coronavirus proposal amid blowback 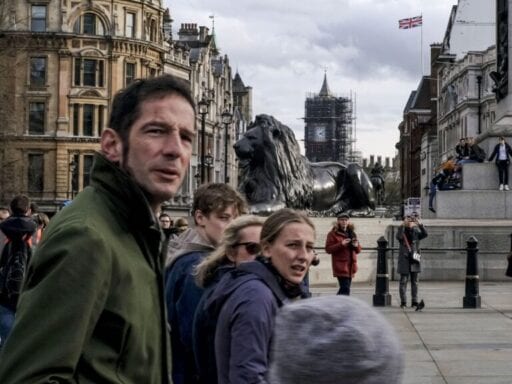 Many Londoners and tourists are continuing their daily activities, this scene is from central London on March 14, 2020. | Alberto Pezzali/NurPhoto via Getty Images

The United Kingdom is previewing a new self-isolation plan for all people over 70 to address the spread of the novel coronavirus in the country, following backlash over a proposal to promote immunity by allowing up to 60 percent of its population to become infected.

On Friday, the UK government’s chief science adviser, Sir Patrick Vallance, said on BBC Radio 4 that one of “the key things we need to do” is to “build up some kind of herd immunity so more people are immune to this disease and we reduce the transmission.”

But on Sunday, Matt Hancock, the UK secretary of state for health and social care, stressed that achieving herd immunity to Covid-19 is not a stated policy. Instead, he said that “in the coming weeks,” people over the age of 70 will be told to self-isolate. This stands in contrast with World Health Organization guidelines, which recommend that everyone, regardless of age, practice social distancing.

“What we will do is listen to all the credible scientists and we will look at all the evidence,” he said. “Herd immunity is not our goal or policy, it’s a scientific concept.”

The UK has faced questions over the efficacy of its social distancing guidance — for instance, at a press conference on Thursday, where government officials, including Prime Minister Boris Johnson, would not specify whether large public gatherings, including football matches, would be canceled.

Chris Whitty, the UK’s chief medical officer, said Thursday that holding off on recommending the sort of social distancing other countries have encouraged was a strategic decision, arguing that imposing it “too early” would cause people to become exhausted and stop participating in it.

But Johnson has since said that he will ban large gatherings in the coming week, in the face of pushback and a rising number of confirmed infections.

As in many countries, the coronavirus pandemic is of growing concern in the UK — more than 1,100 people there have tested positive for the virus as of March 15, and 21 people have died, according to Johns Hopkins’ tracker of Covid-19 cases.

As a result, the government is facing increased pressure to declare a clearer and more unified strategy for combating the virus — and is signaling that it may begin unveiling its strategy in the coming days.

The argument behind achieving herd immunity is that doing so would minimize the risk of a coronavirus resurgence similar to the second wave of the Spanish Flu of 1918. In a successful herd immunity scenario, a country’s population — the herd — would become infected with the virus, recover, and then have an immunity to it, making them resistant to reinfection.

For this to work in his country, according to Vallance, the virus would need to spread to about 60 percent of the UK.

With 66 million people living in the UK nations of England, Scotland, Wales and Northern Ireland, that strategy could lead to as many as 40 million people infected. Depending on the mortality rate — which itself depends on access to medical care and other factors — the death rate en route to improved immunity could range from 300,000 to more than a million.

That reality led to more than 200 scientists and medical professionals pushing back against the herd immunity strategy in an open letter Saturday. These experts argued that herd immunity does not “seem a viable option” because it could overwhelm the UK’s National Health Service. Instead, they called for strict social distancing measures of a more serious variety than the government has currently recommended.

“By putting in place social distancing measures now, the growth can be slowed down dramatically, and thousands of lives can be spared,” the letter reads. “We consider the social distancing measures taken as of today as insufficient, and we believe that additional and more restrictive measures should be taken immediately, as it is already happening in other countries across the world.”

The scientists — which include geneticists, biologists, and physicists — write that the infection rate in the UK mirrors the growth rate of European countries that have seen dramatic increases in new cases. And they cautioned that without aggressive social distancing measures, “this outbreak will affect millions of people in the next few weeks.”

“This will most probably put the NHS at serious risk of not being able to cope with the flow of patients needing intensive care, as the number of ICU beds in the UK is not larger than that available in other neighbouring countries with a similar population,” they added.

This sentiment echoes that of other health officials over the weekend, who expressed dismay at Vallance’s proposal. On Twitter, the former director of maternal, child, and adolescent health at the World Health Organization, Anthony Costello, wrote that researchers don’t even yet know if people become immune to the novel coronavirus after catching it.

“Is it ethical to adopt a policy that threatens immediate casualties on the basis of an uncertain future benefit?” he wrote.

Amid this outpouring of criticism, Hancock’s Department of Health and Social Care said that Vallance’s comments were misinterpreted, according to the BBC.

The UK lags behind other countries in imposing social distancing

The UK’s approach to the coronavirus remains relatively mild compared to other places with similar rates of infection, as countries across the globe try to figure out how best to limit the spread of Covid-19, the disease caused by the novel virus.

In the US, which is nearing 3,000 confirmed reported cases as of March 15, many public events such as baseball and basketball seasons, festivals like Coachella, and the 259-year-old New York St. Patrick’s Day Parade have been canceled.

By contrast, the Six Nations Rugby Cup has taken place across the UK and Europe over the last few weeks with only a handful of matches — including one scheduled for this weekend — being postponed. And on Friday, more than 60,000 people attended a crowded horse race in Cheltenham, in southwest England.

In France, where just under 4,500 cases have been confirmed, all cafés, bars, and restaurants, as well as other gathering spots like nightclubs and movie theaters, have been ordered to close.

Spain, Europe’s second-worst-hit country with about 6,300 confirmed infections, has implemented a nationwide shutdown, with citizens only allowed to leave their homes to buy groceries, work, care for people in need, or to seek medical care.

Israel has also ordered a partial shutdown of shopping centers and restaurants. And Australia and New Zealand are ordering that anyone entering the country, beginning at midnight on Sunday, will be required to self-isolate for 14 days.

There are not yet official bans against large gatherings in the UK, such as at restaurants or sporting events, although some organizations, such as Premier League football, have canceled events themselves. But Prime Minister Johnson recently signaled that he will ban large gatherings this week, meaning the UK’s response will likely fall in line with those of its neighbors in the coming days.