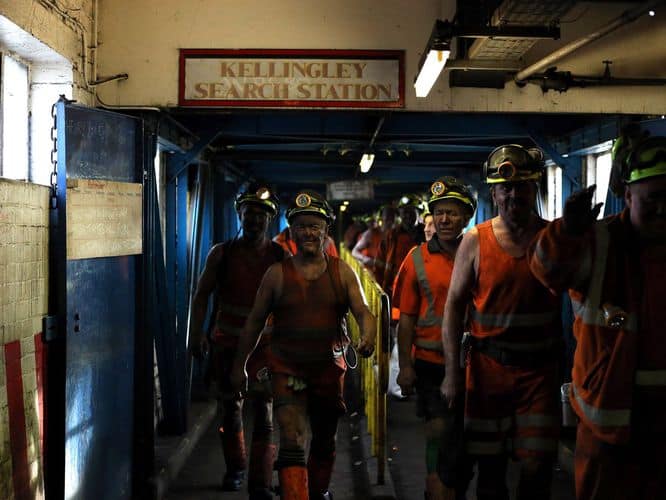 Climate activists and scientists say the mine runs counter to the UK’s climate targets.

The United Kingdom is facing strong criticism from climate change scientists and activists for its decision to move ahead with plans to develop the country’s first deep coal mine in 30 years, despite warnings that doing so could destroy any chance of achieving the country’s climate change target of net-zero carbon emissions by 2050.

In a January 29 letter, the Climate Change Committee, an independent body that advises the UK government on progress toward emissions targets, said opening the mine would lead to significant increases in the UK’s annual CO2 emissions. If the mine is allowed to operate through 2049 as is currently planned, the committee says the UK’s goal of achieving net-zero emissions by 2050, which many experts have said isn’t fast enough as it is, will be in jeopardy.

The mine is set to be developed in west Cumbria, a county in northwest England that the Guardian reports “has seen years of redundancies and high unemployment rates” due to the closure of a major chemical plant and the decommissioning of a nuclear facility in the area. The Cumbria County Council, which approved the project, said it did so because it will create jobs in an area of high unemployment, according to the BBC.

But scientists and climate activists have slammed the decision to go ahead with the mine.

On February 3, Jim Hansen, one of the world’s leading climate scientists, wrote a letter to UK Prime Minister Boris Johnson warning that continuing with the plan to open the mine showed “contemptuous disregard of the future of young people and nature” and would result in Johnson’s “humiliation” at COP 26, the annual UN climate change conference which the UK is set to host in Glasgow later this year.

Hansen, who is famous for testifying to the science of human-induced warming before the US Congress way back in 1998, gave Johnson the option to be a part of changing history on climate change or face protests in the streets.

“In leading the UK, as host to the COP, you have a chance to change the course of our climate trajectory, earning the UK and yourself historic accolades — or you can stick with business-almost-as-usual and be vilified in the streets of Glasgow, London, and around the world,” Hansen’s letter reads.

In a response to Hansen, Johnson’s government said it is leading the fight against global warming by “cutting emissions by more than any major economy so far,” referring to ambitious plans to reduce UK emissions by 68 percent by 2030 compared to 1990 levels, a reference point agreed upon by the more than 100 countries that signed the 2016 Paris climate agreement.

“We have already committed to ending the use of coal for electricity by 2025 and ending direct government support for the fossil fuel energy sector overseas,” the letter reads.

But if the UK has committed to ending the domestic use of coal for electricity by 2025 and ending government support for overseas fossil fuel projects, how can it also be moving forward with opening a new coal mine?

Woodhouse Colliery — the name of the Cumbria mine project, which is operated by West Cumbria Mining — would be the UK’s first new operational deep coal mine in 30 years. The last operating deep coal mine, in North Yorkshire, was capped off in 2016 — “bringing to an end centuries of deep coal mining in Britain,” in the words of a BBC report at the time.

The Woodhouse mine, when opened, would reverse that trend. It will dig up coking coal, also known as metallurgic coal, from beneath the Irish Sea in order to make coke, a “form of almost pure carbon” that is used to make steel. Coal from the mine will help power the steel industry in the UK and western Europe.

According to West Cumbria Mining, the coal will be “processed in a plant which is a ‘building within a building’ to further minimize noise, dust and light impacts.” As a result, the company says the mines are “cleaner, safer to work in and more sympathetic to their environment.”

In March 2019 report, the Cumbria City Council claimed the mine would be carbon neutral — a term that refers to the state of producing net-zero carbon dioxide emissions, which is reached by eliminating the combustion of fossil fuels like coal, or by capturing or offsetting the carbon emissions through processes like planting trees. According to the Cumbria County Council’s report, coal from the Cumbria mine will replace the need for coal from elsewhere, which it says makes it carbon neutral.

But a January 2020 report by Green Alliance, an independent environmental think tank and charity in the UK, threw cold water on the Cumbria mine’s carbon neutral claims. The report argues that according to basic economic theory, “an increase in a supply of a commodity, such as coal, would reduce the price, leading to increased demand, and therefore, increased emissions.”

As a result of this increase in demand, the report’s authors say the steelmaking industry will have less incentive to efficiently use or recycle the coal it uses. The industry would also be less likely to pursue alternative ways to make steel, such as through the Direct Reduced Iron Process which uses natural gas — still a fossil fuel but one that is less polluting than coal.

In defense of the coal mine, the Cumbria County Council has also suggested that the coal produced would be used in the UK and EU, therefore ending emissions from coal imports. But according to the Green Alliance’s report, the county council claims without evidence that having no transport emissions will make up for emissions produced by mining the coal.

The bottom line, the Green Alliance says, is that Woodhouse Colliery won’t be carbon neutral with its plans to extract 2.43 million tons of coking coal per year. That will produce 9 million tons of carbon dioxide equivalents, a measure of greenhouse emissions based on their global warming potential, per year.

And that doesn’t even include the emissions from extraction.

The new mine will be located in Cumbria county near Whitehaven, one of the UK’s poorest towns, with 14 percent of households having financial difficulty paying heating bills as of 2018. So the appeal of 500 new jobs, which the mining company says Woodhouse Colliery would produce, is hard for some local leaders and citizens to overlook (though there is some local opposition).

“But it’s not true,” Tim Crosland, director of Plan B, a UK organization that supports taking legal action to fight against climate change, told me in an interview. Crosland disputed that the promise of “a few hundred precarious jobs in a dying industry” would be worth it to the people of Cumbria in the end. “We need good quality sustainable jobs for the future,” Crosland added.

The government is afraid that canceling the mine is a choice between jobs and environmental concerns, Crosland told me.

“The government is sensitive to the perception that they seem to be sacrificing jobs to serve a metropolitan elite agenda,” he said. “But if you actually look at the expert evidence from the International Energy Agency, the International Monetary Fund, Oxford University — not radical but mainstream thinkers — they say you create more jobs by investing in clean infrastructure.”

Indeed, framing the need for continued investment in fossil fuels as important for jobs and arguing that moving away from fossil fuels will hurt jobs and the economy is a classic talking point the fossil fuel industry has used for decades to thwart climate action.

It’s also one being used in the United States by the fossil fuel industry and its political and media allies to skew public opinion and get in the way of the Biden administration’s ambitious climate agenda.

There’s still a chance the UK could reverse its decision

Ed Davey of the UK’s Liberal Democratic Party has written a letter urging Alok Sharma, the UK’s climate czar, to resign if Prime Minister Johnson doesn’t rescind his decision to approve the mine.

Sharma, who will help lead COP 26 later this year, is reported to be livid over the decision to open the mine.

After all, the COP 26 summit is where the UK is meant to urge other nations to phase out fossil fuels. That’ll be a lot harder to do if the UK itself just approved the development of a brand new coal mine right there at home.

But Crosland said it’s possible all of this opposition might convince Prime Minister Boris Johnson to reverse course. “We’ve seen that the one thing Johnson is is susceptible to this type of pressure, if he reads the signs,” Crosland said.

“If Johnson comes to believe that the Cumbria mine will jeopardize the prospects of the UK coming out of COP 26 with some sort of credibility intact, then I think there’s a chance the government will change its plans,” he said.

Why Silicon Valley’s accomplishments on gender diversity are not as good as they seem
Pope Francis’s mass in the United Arab Emirates was historic — and complicated
Trump will reunite separated families — but only if they agree to deportation
Eric Garner died during a 2014 police encounter. An officer involved might lose his job.
Birtherism 2.0, explained
School picture day is stressful and expensive. Why do we do it?