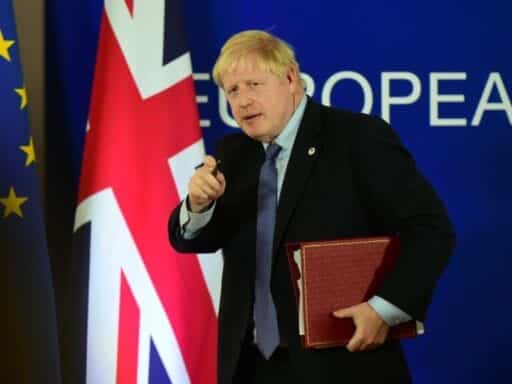 Parliament just voted to make the prime minister seek a Brexit delay, even if his deal passes.

The British Parliament has made Boris Johnson’s premiership very difficult. Saturday was no exception.

This time, it spoiled the vote on his Brexit deal.

Parliament approved an amendment on Saturday that basically forced Johnson to ask for a Brexit delay, no matter what. It turned the vote on Boris Johnson’s new Brexit deal from a dramatic decision to something far less meaningful.

The amendment, introduced by Sir Oliver Letwin, a former Conservative member of Parliament (MP) who’s now an independent, was intended to eliminate the possibility of an “accidental” no-deal Brexit on October 31, the current Brexit deadline.

That’s because even if Johnson’s deal passes, the UK still needs to pass legislation to put this deal — which is essentially a treaty with the EU — into law. In other words, two things have to happen for the UK to leave on October 31 with a deal: voting for Johnson’s Brexit agreement and voting on all the legislation around it.

Some MPs feared that if Johnson’s deal passed on Saturday, the government would try to rush through this legislation, which wouldn’t offer enough time for Parliament to scrutinize it fully. After all, divorcing the EU after decades is kind of a huge thing; the exit took three years, maybe it should take more than a week or two to get the legislation done.

There were also some concerns (unclear how serious) that some hardcore Brexiteers or skeptics of Johnson’s deal might vote for it on Saturday but then block or reject some of the implementing legislation, careening the UK toward a catastrophic no-deal exit on October 31.

So MPs came up with a plan to make sure the approval for the deal is deferred until all that accompanying legislation has passed, which they argue necessitates an extension to make sure there’s enough time to get that all done.

“My aim is to ensure that Boris’s deal succeeds, but that we have an insurance policy which prevents the UK from crashing out on 31 October by mistake if something goes wrong during the passage of the implementing legislation,” Letwin wrote in a note to reporters on Friday.

Essentially, this amendment is a sign that MPs — even if some are ready to vote for Johnson’s revised deal — don’t really trust Johnson’s government and wanted to put this “insurance policy” in place to guarantee the UK won’t crash out of the EU under any circumstances.

The good news for the prime minister: This amendment is not yet an outright rejection of Boris Johnson’s deal, it just postpones that decision. (If Johnson’s deal had failed, the prime minister would have had to ask for a three-month extension, anyway. Parliament voted on this back in September when they seized control to block a no-deal exit.)

The Letwin amendment, then, basically locked Johnson into asking the EU for a delay, no matter what happened with the the vote on the deal.

But Johnson has staked his premiership on the promise that he would take the UK out of the European Union by the October 31 deadline, with or without a deal.

After the amendment passed on Saturday, the prime minister continued to insist that he wouldn’t negotiate an extension with the EU. Johnson said he would put forward Brexit legislation next week, forging ahead with his plans to leave by October 31.

UK PM says he’s not “daunted or dismayed” by MPs backing Letwin amendment, saying he “will not negotiate a delay to Brexit”https://t.co/VAzJ7IQqgO #BrexitVote pic.twitter.com/Z8yqI2Uxgy

Johnson is required, by law, to write to the EU by 11pm London time for an extension, so he might just be using this time to bluster. Still, there’s some worry that Johnson might find a loophole, including sending a “second letter” to the EU that basically says, “Never mind what I said, don’t grant extension.”

Otherwise, there doesn’t seem to be much of a way out for the prime minister. And Johnson has already gotten in trouble once for flouting the law; it’s probably not a great idea to try again.

There is another caveat to all of this parliamentary drama: All 27 EU leaders must agree unanimously to back an extension of any length. The EU has sent mixed signals on whether it will delay Brexit for a third time, but there’s a decent chance leaders will acquiesce if it means avoiding a costly and catastrophic no-deal exit at the end of the month.

At the same time, EU leaders are exasperated. They have insisted this is the last deal they can possibly make and the UK could ratify it by the end of the month. Though they’ve said a version of this before, this time it really might be.

Johnson’s Brexit deal isn’t dead. But the prime minister might now have to do exactly what he vowed he wouldn’t: ask the EU for a little bit more time.

House Democrats launched contempt of Congress proceedings against Mike Pompeo
Alcohol and carbs got America through election night
Twitter, Microsoft, LinkedIn, and other companies are calling for an end to Trump’s rule to keep out...
“We are on our own”: How the coronavirus pandemic is hurting child care workers
Airline bailouts, explained
Why New Hampshire should not be the first primary, in one chart