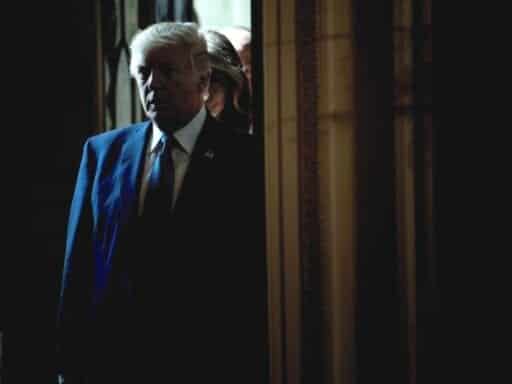 Share
Loading...
US President Donald Trump waits to enter for a Hispanic Heritage Month event in the East Room of the White House October 6, 2017 in Washington, DC. | AFP/Getty Images

I used to be on the fence about impeaching Trump. Not anymore.

Since the Democrats took control of the House, I’ve been deeply conflicted about the debate over impeaching President Donald Trump. There were very strong arguments on both sides, and it seemed genuinely difficult for House Speaker Nancy Pelosi to chart the right course.

That ambivalence ended this weekend. After worrying press reports about the president’s phone calls with Ukrainian President Volodymyr Zelensky, Trump all but openly admitted that he had pushed Zelensky to investigate Joe Biden and his son Hunter.

There is now no question: It’s time to impeach Donald Trump.

The best case against impeachment no longer applies

The most compelling argument against impeachment, to my mind, was that it wouldn’t really accomplish anything.

There’s a virtual guarantee that impeachment will fail in the Republican-controlled Senate, which means there’s no real chance of actually removing Trump from office. Public opinion about the Russia scandal became more set along partisan lines as time went on, making it unlikely that drawing attention to it would galvanize public opinion against the Trump presidency in 2020. Why risk distracting Democrats from the issues on which Trump is genuinely unpopular, and jeopardizing the House Democratic majority, when the gains were so marginal?

This seems to be something like the reasoning that has guided Pelosi’s stolid opposition to impeachment. It’s not obviously correct, but it’s a serious argument — and one that pro-impeachment Democrats and commentators dismissed too easily.

The new Ukraine scandal challenges this logic. There is now an obvious and immediate pragmatic upside to impeachment: stopping an ongoing abuse of presidential power that could undermine the integrity of the 2020 election.

We know — thanks to an intelligence community whistleblower, investigative journalists, and the president’s own public statements — that Trump seems to have repeatedly attempted to convince the Ukrainian government to open an investigation into Hunter Biden’s business dealings in Ukraine and Joe Biden’s alleged involvement in protecting his son from prosecutorial attention.

We know that there is currently no evidence of illegal conduct by either Biden in the Ukraine dealings; while Hunter’s partnership with a corrupt Ukrainian oligarch was arguably unethical, there is no reason to believe his father was involved in it. The president is trying to get a foreign power to open an investigation into the highest-polling Democratic candidate, perhaps Trump’s likeliest opponent for reelection in 2020, on an extremely flimsy pretext — to turn Biden’s fake Ukraine scandal into “her emails” 2.0. He is actively working to weaponize the presidency to boost his political fortunes.

It might be even worse. Trump himself has linked the Biden issue to US aid to Ukraine, telling reporters on Sunday that he “had every right” to push Ukraine about Biden because “we don’t want a country that we’re giving massive aid to to be corrupting our system.” If he did threaten to condition aid to Ukraine on its investigation of Biden, then he’s been nakedly twisting US foreign policy to suit his own ends.

This is a grotesque abuse of power, and seemingly an ongoing one, with potential implications for the integrity of an election to be held next year. Whereas the Russia investigation was backward looking, an attempt to uncover what exactly had occurred in a prior election, the Ukraine scandal reflects the president’s contemporary and future-looking behavior.

This dramatically changes the logic of impeachment. The goal is no longer retrospective accountability, holding the president responsible for past misdeeds. It is stopping his current behavior. The hope would be that impeachment would bring so much attention and scrutiny to Trump’s Ukraine push that he cannot get away with undermining yet another election.

Any impeachment proceeding would be the story in American politics, sucking up media attention and congressional investigative resources. A House majority vote to impeach would lead to a trial in the Senate, which would attract more scrutiny even if Majority Leader Mitch McConnell refuses to take the proceedings seriously.

The aim would be to prevent the president from making some kind of shady, behind-the-scenes agreement with Ukrainian authorities and make him think twice about any other similar scheme for using his powers for electoral gain.

This level of attention seems like the best available tool for preventing Trump from continuing his efforts to undermine the 2020 election. Moreover, such high levels of attention and partisan furor would also make it harder to imagine that the Ukrainian government, which might have to deal with a Democratic president in 2021, would come to any kind of corrupt deal with Trump. Democratic posturing would serve as a counterweight to Trump’s pressure on Ukraine, signaling to the country’s leadership that any cooperation with the president’s inappropriate demands could seriously fray relations with the US in the next administration.

Under this logic, it doesn’t actually matter so much that impeachment will invariably fail in the Senate. The very act of shining a light on Trump’s misbehavior would limit his ability.

If you have a president who is actively trying to abuse his power in order to invite foreign meddling in the next presidential election, you need to do what you can to stop him. And impeachment is the biggest and most powerful tool in Democrats’ toolbox.

Impeachment, accountability, and the need to take a stand

A skeptic could agree with all of the above and still make the case for Democratic action short of impeachment. They might argue that House Democrats should aggressively investigate Trump’s Ukraine behavior, hold hearings about it, and issue subpoenas. That could serve to draw attention to Trump’s behavior, they say, without the mess and complication created by a formal impeachment drive.

But this logic runs up against another aspect of the case for impeachment, one that was compelling before the election and doubly so now: the need to signal that Trump’s conduct is beyond the pale of what’s acceptable.

In a May piece in the Atlantic, Lawfare’s Quinta Jurecic argued impeachment should not be reduced to a mere matter of political calculation. Impeaching Trump is about signaling that his conduct is unacceptable, about trying to impose accountability on this president and set a standard for future ones:

Gerald Ford, as a member of the House of Representatives, argued in 1970 that an impeachable offense is “whatever a majority of the House of Representatives considers it to be at a given moment in history.” He was not wrong that impeachment is a political process; it is, after all, entrusted to Congress. To treat the subject as an entirely political calculation, though—as Ford did and as Pelosi appears to be doing now—is to slouch toward nihilism. Treating the words high crimes and misdemeanors as if they hold real significance, however, is a way of protesting that the world should not be as it inevitably is.

This is perhaps overly earnest. But there is a real humanity and purity of purpose in asserting earnestness against the void.

But political calculations are not so easily brushed aside, especially on a question as momentous as impeachment. Is it worth launching a major political campaign with limited practical upshot just to send a message? Wouldn’t a failed impeachment drive just prove that politics invariably triumph over ideals?

Now that we’re dealing with ongoing wrongdoing that could stand to benefit the president in the next election, these objections don’t have the same force — and Jurecic’s logic becomes much more compelling.

If impeachment can be used not only to signal disapproval but actually work to head off an ongoing threat to American democracy, then the normative power of the proceedings might be reestablished. They won’t just be futile raging at the debased nature of American politics under Trump, but an efficacious means of actually changing those politics for the better.

For Trump’s impeachment to actually serve as a means of accountability, of showing future officeholders that misbehavior carries costs, there needs to be some actual bite to them. Otherwise, they really risk sending the opposite signal of what’s intended — that nothing actually matters, that the president can do whatever he wants if he has support of at least 34 senators.

But if impeachment plausibly constrains the president, preventing him from engaging in abuse of power for political gain, then we’re in entirely different territory. The lesson of the Trump presidency would not be nihilism; it would be that actions carry consequences, that Congress’s ultimate constitutional power can still be used to rein in the president even in a political environment seemingly defined by extreme partisanship.

That’s the case for impeachment, not just investigation: to send the strongest and most high-profile signal possible that Trump’s actions are unacceptable, both now and to future presidents. This was the best argument for impeachment prior to the Ukraine scandal’s emergence, and it’s even more compelling now.

I recognize that this logic is not airtight. It makes a lot of claims about the likely consequences of impeachment that are impossible to know with any certainty. Such is the case with any argument about what to do in politics; our knowledge about the future is always outpaced by the need to act in the present.

But what I’m certain of is that the president’s behavior in this Ukraine situation should worry anyone who cares about the health of American democracy. If this isn’t impeachable behavior, then I’m not sure what is. And when the stakes are so high, Democrats have no real choice but to take a leap of faith.

Robert Redford bids farewell to the silver screen in the pitch-perfect The Old Man & the Gun
What we know about Joe Biden’s possible vice presidential picks
“Deaths of despair”: The deadly epidemic that predated coronavirus
Shazam! is an unapologetically buoyant triumph of a superhero movie
The Trump administration says global slavery and child labor are bad — for American businesses
How Trump is planning to force TikTok to sell itself