The UK’s Labour party has a new leader: Keir Starmer 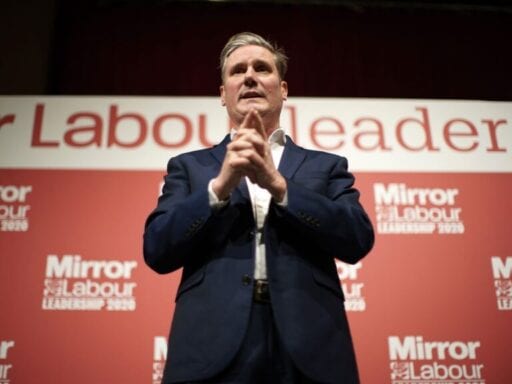 Starmer’s election marks a likely break from Jeremy Corbyn’s leadership, but the agenda will now focus on coronavirus.

Keir Starmer, who previously served as the opposition’s shadow Brexit secretary, won the leadership contest with 56 percent of the vote, defeating two other candidates, Rebecca Long-Bailey and Lisa Nandy.

Starmer’s election indicates that Labour is seeking a change after five years of Jeremy Corbyn, the left-wing leader who agreed to step aside following the party’s crushing defeat in December elections. Starmer has promised to embrace some of the popular Labour policies, but is seen as someone who can appeal more broadly to the UK electorate because he’s not as left-wing as Corbyn.

Starmer was the presumptive favorite, though the coronavirus has recently overshadowed the opposition’s search for a new leader. Labour’s goal was to announce a new leader by April, shortly before important May local elections that would be Labour’s first serious electoral test. But those elections have now been postponed.

Starmer acknowledged the strange times in his victory statement. “It is the honor and the privilege of my life to be elected as leader of the Labour party,” he said. “It comes at a moment like none other in our lifetime.”

Who is Keir Starmer?

Starmer, 57, is a human-rights lawyer who has served as the former director of public prosecutions and head of the crown prosecution service (a bit like a US Attorney). He joined Parliament in 2015, and gained a lot of attention during the Brexit debate, serving as Labour’s shadow Brexit secretary and helping to temper Corbyn’s approach to Brexit.

In Parliament, he often articulated a case against the Conservative government’s Brexit plans more coherently than the Labour leader, Corbyn. Starmer supported remaining in the EU, though now that Brexit is complete, he’s urged the party to move on from the issue and to focus instead on a smooth transition out of the bloc.

In his bid for party leadership, Starmer received strong support from labor unions, which helped propel his candidacy and was one of the reasons why he was an early favorite to win the election. Party members hope union backing can help Starmer ensure the party retakes working-class constituencies that have historically backed Labour, but that voted for Prime Minister Boris Johnson and the Conservatives during the 2019 elections.

Starmer is seen as something of a compromise candidate who can unite the Labour party’s far-left base and more moderate members. Starmer served in Corbyn’s shadow cabinet (though he quit in protest in 2016 over Brexit, only to come back after Corbyn was re-elected leader), and has promised to champion stances that Labour embraced in its 2019 manifesto, like anti-austerity measures. During the leadership election, he avoided attacking Corbyn and tried to appeal to his supporters.

But Long-Bailey, not Starmer, was seen as Corbyn’s ideological successor, and was embraced by the grassroots of the party. Starmer was seen as someone who was a bit more pragmatic and could appeal to more moderate Labour voters, and who could champion popular left-wing Labour policies, but sell them to a wider audience than Corbyn was able to. And Starmer’s overwhelming win seems to suggest even the party’s base is willing to adapt to a leader who may be better equipped to take the party out of the opposition.

Starmer is the new Labour leader, but coronavirus makes these strange times

But Starmer will take over Labour as both the party and the country are in a moment of crisis, though for vastly different reasons.

His predecessor, Corbyn, was a left-wing leader who was personally deeply unpopular. Corbyn steered the party far to the left, attracting an energetic base of support. But, with the general public, Corbyn was seen as too radical, although some of Labour’s policies were broadly popular. The public’s general perception of Corbyn, along with the party’s muddled stance on Brexit, led to a stunning defeat against Johnson and the Conservatives — a defeat that was the party’s worst in decades.

But the coronavirus crisis is likely to dominate the political agenda in the UK (as elsewhere) for the foreseeable future. It puts Starmer in a somewhat strange position as a new Labour leader.

Johnson (who is currently in self-isolation with the coronavirus) has faced criticism for his handling of the crisis at times, but national emergencies are often awkward times for the opposition: being seen as overly critical can come off as petty and counterproductive, but being overly supportive of the government can eliminate an important check.

Starmer, in his victory statement, outlined Labour’s role in the crisis. “It’s a huge responsibility and whether we voted for this government or not, we all rely on it to get this right. That’s why in the national interest the Labour Party will play its full part,” he said.

“Under my leadership we will engage constructively with the government, not opposition for opposition’s sake. Not scoring party political points or making impossible demands. But with the courage to support where that’s the right thing to do.”

And Starmer argued the virus has made it more evident than ever why the policies Labour promotes are in the best interest of the country, saying the UK could not go back to “business as usual” as the crisis passes — and that Covid-19 had exposed the “fragility in our society” that demands a better vision for the country, and for change within the party as well.

Johnson said on Twitter Saturday that he’d spoken with Starmer, and they agreed to work together constructively “through this national emergency.”

The Conservatives have an overwhelming majority, so Labour doesn’t have much power, but Starmer will have the job of advocating for his party’s priorities — particularly in any economic relief packages. But the pandemic likely means that plans to help rebuild the Labour party after December’s defeat will largely be put on hold, for now.

Recode Daily: The NSA collected the wrong data a second time
St. Louis ousts prosecutor who didn’t get charges against cop who killed Michael Brown
Trump and Biden will hold dueling town halls instead of a debate this Thursday
Nick Sandmann, RNC speaker and Covington Catholic video star, explained
Trump’s push to hold the G7 at a resort he still owns and profits from, explained
Why Israel hasn’t annexed the West Bank