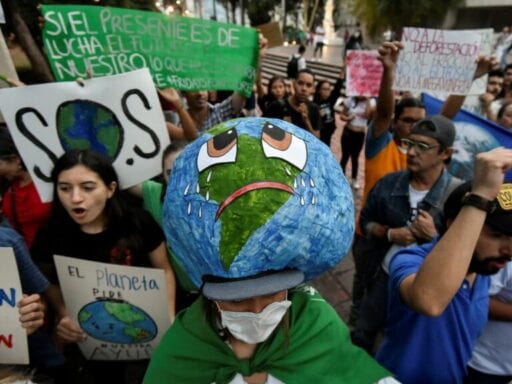 Share
Loading...
Climate strikes around the world took place on September 20, 2019 to pressure world leaders to do more to combat warming ahead of the United Nations Climate Action Summit. | Luis Robayo/AFP/Getty Images

Three things to watch for at the UN Climate Action Summit on Monday.

In the run up to the United Nations Climate Action Summit this Monday, UN Secretary General Antonio Guterres has repeatedly warned countries that they need more than empty promises to fight climate change. “Don’t come to the summit with beautiful speeches,” Guterres said at a press conference last month. “Come with concrete plans … and strategies for carbon neutrality by 2050.”

Guterres has convened the gathering of world leaders ahead of the United Nations General Assembly, which begins Tuesday, to secure more ambitious commitments to curb greenhouse gas emissions than those made in 2015 during the signing of the Paris climate agreement. Already, several countries have said they will increase those commitments, known as Nationally Determined Contributions, according to the 2020 NDC Tracker, just released by the World Resources Institute, an environmental think tank in Washington, DC.

Paris signatories knew that their NDCs would not be sufficient to meet the agreement’s goal: limiting temperature rise to “well below” 2 degrees Celsius and preferably to 1.5˚C. The expectation was that they would ramp up their commitments over time, with the next round of NDCs expected in 2020. Next year is also when countries are expected to release their frameworks for reaching carbon neutrality by 2050.

Since the Paris agreement, a few countries, including Costa Rica, have begun to transition off of fossil fuels in earnest, and renewable energy has become dramatically cheaper. Yet global greenhouse gas emissions have continued to rise, the climate is growing increasingly unstable, and three major countries — the United States, Saudi Arabia, and Brazil — are balking at international cooperation on climate change. The US, the world’s second-largest carbon emitter, is aiming to withdraw from the Paris agreement and saw its emissions rise last year after years of decline.

Guterres has told reporters that the summit is an opportunity to recognize the countries that are ahead of the curve and pressure other ones lagging behind. And it’s coming just as a global social movement for climate action is erupting.

On Friday, massive international, youth-led climate strikes mobilized an estimated 4 million people to demand tougher action from governments to combat warming. “What I want is the whole of society putting pressure on governments to make governments understand we need to run faster, because we are losing the race,” Guterres told Covering Climate Now, a global collaboration of more than 250 news outlets, on Wednesday.

Indian Prime Minister Narendra Modi and French President Emmanuel Macron are expected to speak, along with leaders from at least 48 other countries. But the UN is denying the spotlight to countries that are building or financing new fossil fuel power plants or are neglecting their emissions commitments. The US, Brazil, Saudi Arabia, South Africa, and Japan are among the countries excluded from speaking.

“Only the boldest and most transformative actions [will] make the stage,” Amina Mohammed, the UN deputy secretary-general, told the Financial Times. “We will see on Monday who is stepping up.”

It may be difficult to raise the bar for fighting climate change when many countries are barely clearing the current benchmarks. But with time rapidly running out to curb emissions enough to stay within warming targets, the urgency is only growing.

Here are three key questions to follow during the climate action summit.

How much more money will wealthy countries commit to the Green Climate Fund and other funding partnerships?

The fundamental injustice of climate change is that the many of the wealthiest countries in the world have historically emitted the most greenhouse gas emissions, but the poorest who contributed least to the problem stand to suffer the most. That includes island nations like the Bahamas facing rising seas and fiercer storms like Hurricane Dorian, or countries in Southeast Asia suffering from extreme heat waves.

Developed countries may be able to transition toward clean energy on their own, but a problem like climate change demands action from every country, and emerging economies are a growing source of greenhouse gas emissions.

The UN has created a number of mechanisms to help correct this discrepancy: The UN Green Climate Fund, the reducing emissions from deforestation and forest degradation program aka REDD+, and the Clean Development Mechanism.

These programs take funding from one group of countries and use it to finance tactics that mitigate climate change in other parts of the world like renewable energy deployment, forest restoration, and sustainable agriculture.

They’re critical to ensuring that climate change progress in one country isn’t overwhelmed by backsliding in others. So it’s worth paying attention to see how much more developed economies are willing to contribute to these programs.

“At the summit there is some expectation that other countries will make announcements about their readiness to increase their contributions,” said David Waskow, director of the International Climate Initiative at the World Resources Institute.

The Green Climate Fund is now in its second round of replenishment, and already countries like the United Kingdom and France have pledged to double their contributions.

Wealthier countries have also recently used the threat of revoking funding from other countries that aren’t upholding their environmental commitments. Germany and Norway recently threatened to withhold their contributions to the Amazon Fund, which supports rainforest restoration projects, because of Brazil’s lax enforcement of environmental protections.

The summit could be an opportunity for laying the foundations of a broader international carbon trading market. This could drive more aggressive climate mitigation efforts around the world under the Paris rulebook, which lays out the details of implementing the Paris agreement. But such a mechanism would require rigorous accounting to ensure progress and coordinating rules among countries, which requires even more diplomatic wrangling to sort out.

What will China and India bring to the table?

China is the number one greenhouse gas emitter in the world. The US is second, and India is third.

Indian and Chinese leaders often bristle at being grouped with the US because they have much larger populations, so their per capita emissions are much lower. In fact, both countries are roughly on track with their NDCs.

But to limit global warming to safer levels, total emissions must go down. And that means China and India have to make massive changes to their energy systems, especially since both countries are growing in population and experiencing a rising standard of living.

Indian and Chinese leaders are expected to speak at the summit, so it’s likely that they will be making some new commitments to limit their greenhouse gases.

UN special envoy on climate change Luis Alfonso de Alba told Climate Home News that he was “very confident that China will come to the summit with a clear commitment on a number of areas … with a much higher level of ambition.”

And according to Climate Action Tracker, India is one of the few countries in the world whose greenhouse gas goals are in line with the 2 degree Celsius warming limit in the Paris agreement.

How seriously are countries taking their own obligations under the Paris agreement?

At the climate actions summit, major corporations, banks, cities, and local governments are also going to to announce their own plans to fight climate change. This will likely take the form of binding net-zero emissions targets, renewable energy deployments, divestment, and clean energy financing.

Such commitments can reduce a significant amount of greenhouse gas emissions, but the real action still has to come from heads of state.

“At the end of the day the UN summit has to fundamentally be about what national governments do. In the center ring is what leaders themselves are going to do,” Waskow said. “What we’re looking for is very strong signals that countries are ready to strengthen their actions.”

Some countries have drastically enhanced their climate goals in the last year beyond their own NDCs. In June, the United Kingdom passed a law committing the country to net-zero emissions by 2050, making it the largest economy to date to pass such a commitment. And Guterres told CNN he is optimistic the EU is going to announce a commitment to carbon neutrality by 2050.

On the other hand, countries may be reluctant to increase their own obligations when they see so little progress elsewhere. Only 23 countries, representing 2.3 percent of global emissions, have indicated that they will enhance their NDCs in 2020. So there’s a risk that a lack of effort from bigger emitters could fuel a feedback loop of complacency.

“The two big challenges I see are: will there be enough of a sense of momentum to get the majority of countries moving forward to enhance their NDCs?” said Robert Bradley with the NDC Partnership, an organization trying to fast-track climate and development action. “And will it be enough to get gigatons of carbon in emissions reductions? On the NDC Partnership side, we are seeing and supporting action from a large number of countries. But the gigatons really depend on major emitters such as the United States and China.”

Having the leaders of 50 countries at the summit speak to their own goals could be a way to motivate the less ambitious countries. But we still don’t know whether that will lead to even more countries proposing more aggressive NDCs in 2020.

Christiana Figueres, who led the UN Framework Convention on Climate Change from 2010 until 2016, cautioned that while she has high hopes for the summit, it’s still just one event, and that meeting the Paris climate goals requires sustained effort.

“One has to understand that there is no such thing as a single event that is going to catapult us from the situation that we’re in to a dramatically different situation,” she said during a conference call with reporters. “This event coming up, because it is called by the secretary general, because it is buttressed by so much outrage out on the street at the lack of action, is actually a very important moment to raise both the awareness of the threats but also the awareness of the opportunities.”