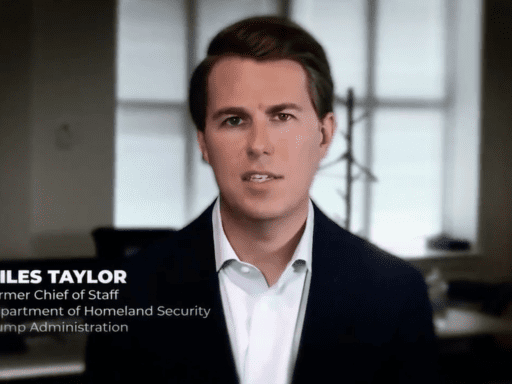 It’s October surprise season — but so far, 2020’s surprises have paled in significance to those that roiled the 2016 presidential contest.

And the latest underwhelming reveal is Wednesday’s unmasking of “Anonymous,” the former Trump administration official who wrote a widely read 2018 New York Times op-ed titled “I Am Part of the Resistance Inside the Trump Administration,” as well as a subsequent book.

Contra the expectations of some that the Times provided anonymity to a Cabinet secretary or top White House aide, it turns out Anonymous is Miles Taylor, a former official at the Department of Homeland Security, who was a high-level aide to Homeland Security Secretary Kirstjen Nielsen.

Taylor, who left the administration in 2019 to take a job at Google, had already come forward to condemn Trump publicly. This August, he starred in a video for the group Republican Voters Against Trump, and began doing media interviews (while on leave from his Google job). But he only fessed up to being Anonymous this Wednesday, after previously denying it.

People from across the political spectrum mocked the revelation that the much-heralded Anonymous was so little-known, suggesting the New York Times overhyped the whole thing. Now some Trump critics are praising Taylor for coming forward. Some liberals, meanwhile, are outraged for a different reason: Taylor played a role in the Trump administration’s family separation policy, and they see the whole “Anonymous” project as a blatantly self-serving attempt to rehabilitate his reputation.

Overall, though, this late revelation is unlikely to do much to affect the election — except for making the president angry.

….associated with this FRAUD on the American people!

What was the “Anonymous” op-ed in the New York Times?

Two years have passed, so it may be hard to remember what a frenzy ensued in September 2018 when the New York Times published the op-ed we now know to be by Taylor. (According to the New York Times, the op-ed was the most visited story on its site that —year — it trailed only the House and Senate election results pages in traffic, and neither of those is really a “story.”)

The op-ed itself merely confirmed what a plethora of anonymous sources have been saying since this administration began — that officials often find Trump’s management style frustrating, sometimes view his instructions as bizarre, and try to slow-walk them or avoid carrying them out.

However, the argument was framed in a particularly inflammatory way. The headline declared that the author was “part of the resistance inside the Trump Administration.” And Anonymous wrote that he was “working diligently from within to frustrate parts of [Trump’s] agenda and his worst inclinations” — and condemned Trump as acting “in a manner that is detrimental to the health of our republic.”

This set off all sorts of conspiracy theorizing on the right about internal saboteurs. Trump himself tweeted the single word “TREASON?” before questioning whether the Times made the whole thing up.

It also triggered a widespread guessing game, both inside the administration and externally, about who the author might be. The only identification provided by the Times was that he or she was “a senior official in the Trump administration.” Some tried to pinpoint linguistic clues (one very wrong theory was that since the op-ed used the word “lodestar,” and Mike Pence had previously used that word, Pence might be the author). Sleuths in the Trump administration, meanwhile, fingered the wrong culprit, incorrectly blaming former Deputy National Security Adviser Victoria Coates.

But Anonymous — who followed up the op-ed with a book the following year, titled A Warning — remained anonymous until this week, when Miles Taylor stepped forward to admit it was him.

Who is Miles Taylor?

Taylor has the résumé of a respectable up-and-coming Republican striver; he scored a series of scholarships and government posts in the decade before he entered the Trump administration.

In 2007, Taylor took time off from college to work in then-Vice President Dick Cheney’s office. The following year, “at age 20, he accepted a position with the Department of Homeland Security, becoming the youngest presidential appointee in the Bush administration,” according to a release by Indiana University.

Taylor was later named a 2012 Marshall Scholar, and earned a master’s degree at Oxford University. After that, he landed a job as an adviser to the House Homeland Security Committee, then chaired by Rep. Mike McCaul (R-TX). His future in Republican policymaking appeared bright.

Then Donald Trump won the 2016 election. So, like many other ambitious young Republicans, Taylor joined the new administration in 2017 — heading back to the Department of Homeland Security, where he started off working for John Kelly as a counselor.

He stayed on at the department through the tenure of Kirstjen Nielsen and the controversies over the administration’s policy to separate migrant parents from their children at the US-Mexico border. Taylor published the now-famed op-ed in the fall of 2018, and stayed for some of the following year, when he rose to be Nielsen’s chief of staff.

Later in 2019, Taylor then stepped down, took a job at Google, and anonymously published A Warning. This August, he went on leave from his Google job and stepped into the spotlight to publicly criticize Trump. He landed a gig as a CNN contributor, and now he has finally come forward as Anonymous.

NEW: Testimonial ad from Trump’s Former DHS Chief of Staff @MilesTaylorUSA, declaring his support for Joe Biden and describing Trump’s presidency as “terrifying” and “actively doing damage to our security.”

Since Taylor came forward, some prominent journalists have questioned the New York Times’s decision to grant him anonymity, heavily promote his op-ed, and brand him as a senior administration official.

I also didn’t realize the definition of “senior administration official” could be *this* expansive. Wasn’t even an agency chief of staff at the time the op-ed ran.

The revelation of the identity of “Anonymous” calls into question whether the NYT had ample grounds to allow him to write without identifying him. I figured it had to be someone at cabinet level, at least.

“Senior administration official” is an infamously vague reporting term. Back in 2005, Slate’s Daniel Engber wrote that “there are no hard and fast rules” among journalists on who counts as senior. Generally, he said, reporters told him they tried to limit the term to the 20 or so White House aides with the “assistant to the president” designation, as well as the top few people in each Cabinet department or agency.

Jim Dao, then the New York Times op-ed editor, wrote in 2018 that “the term we chose, senior administration official, is used in Washington by both journalists and government officials to describe positions in the upper echelon of an administration, such as the one held by this writer.” (Dao was reassigned to the newsroom earlier than this year when his boss, James Bennet, resigned after publishing a controversial op-ed by Sen. Tom Cotton.)

I wrote in 2018 that I doubted the Times would identity someone “totally obscure,” like a “deputy assistant secretary in a backwater Cabinet agency” in this way. And Taylor isn’t that. He was a top-level policy adviser and operationally important to one of Trump’s highest-profile Cabinet departments.

But does that make him senior enough to be called a “senior administration official”? The reality is that the vast majority of such senior officials we see quoted in news stories will go on remaining anonymous — so it’s hard to know if Taylor’s identification is highly unusual, or whether it’s par for the course.

Others are criticizing Taylor for his involvement in family separation policy

When the Anonymous op-ed was first published, I argued that two motivations for the author shined through in the text.

First, Anonymous clearly wanted to rehabilitate the reputations of certain Trump administration officials, whom he deemed “unsung heroes” working behind the scenes to rein in Trump. He stressed that some Trump aides “have been cast as villains by the media,” despite privately going “to great lengths to keep bad decisions contained.” (Translation: We’re not all bad!)

Second, Anonymous wanted to lay down a marker that he was part of an internal resistance to Trump. “I’d guess the official expects his or her identity to become public at some point, and thinks that one day his or her social or professional interests will be served by being unmasked as the author of the now-famous op-ed. That is, the person is getting positioned for a post-Trump world,” I wrote.

Now we have the added information that Taylor was deeply involved in family separation, one of the most toxic Trump administration policies — a policy that first drew national condemnation just months before his op-ed published. So it’s easy to see why Taylor may have wanted to start work on rehabilitating his reputation. Here, for instance, is what NBC reporter Jacob Soboroff (who closely covered family separation) tweeted Wednesday:

This is the way Miles Taylor talked about family separation LAST WEEK (“It’s horrible. But…”) when news broke parents of 545 separated kids still cannot be located. He later deleted the tweet. pic.twitter.com/2QW0TpsNVv

In August, Taylor told NBC that he “should have done more” to stop family separation at the time. “Looking back, I wish I had laid my body on the train tracks and said, ‘we cannot implement this no matter what you guys tell us about resources,’” he said.

But with the polls suggesting Trump is likely to lose, many critics of his administration are not so eager to welcome former top members of that administration — be they “senior” officials or not — back into respectability.

Your smart devices listening to you, explained
Watch: the 3 best performances of the 2018 VMAs
Brexiteer to second referendum: a handy Brexit glossary
Report: The CDC contaminated its first coronavirus tests, setting US back on testing
A negative Covid-19 test isn’t an all-clear
The 19 Democrats running for president, the next debate lineup, and everything else you should know ...