The unprecedented number of women running for governor in 2018 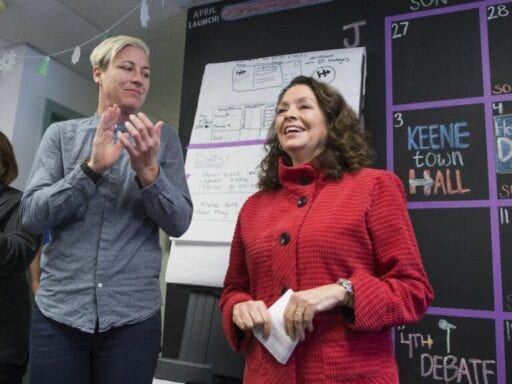 There are just six women governors in the US. Twelve women are nominees for governor in 2018.

Molly Kelly’s victory in New Hampshire’s Democratic primary for governor on Tuesday solidified an important milestone in the year of the woman — particularly women running for the highest executive office that’s not president of the United States.

With Kelly’s win, there are now officially 12 women nominees for governor in races across the country (with the potential for a few more to join after the September primaries). That’s double the total number of women governors currently serving: Republican Govs. Kay Ivey (AL), Mary Fallin (OK), Kim Reynolds (IA), and Susana Martinez (NM), and Democratic Govs. Gina Raimondo (RI), Kate Brown (OR),

The women running for governor in 2018 make up a diverse group. Stacey Abrams in Georgia could become America’s first black woman governor; Paulette Jordan in Idaho could become the nation’s first Native American governor; and Vermont Democrat Christine Hallquist is running in hopes of becoming the first transgender woman to serve as the top state executive.

Of course, it’s not likely that all of these 12 candidates will win their races; a number are nominees in deeply red states including Texas, Kansas, and Idaho, and several are running against popular incumbents. But the fact remains that these women are offering a vision of what America could look like if a diverse electorate were represented by an equally diverse slate of politicians. Out of the current 50 governors, the overwhelming majority are white men.

Democratic women are poised to make an impact on governors’ mansions and, with that, state policy. This is notable given the fact that men governors and men-dominated state legislatures are often the ones making policy impacting women, including increasingly strict abortion bans and defunding women’s health centers.

Executive positions are difficult for women to crack — not just in politics, but also in business. For instance, while women make up 44 percent, nearly half, of the overall S&P 500 labor force, they represent just 25 percent of executive- and senior-level officials and managers, and just 6 percent of CEOs, a 2017 report by the Center for American Progress found. This leadership gap exists in many fields, including medical and legal careers.

Women are stepping up to lead in political races around the country this year. But many of these candidates running for governor will still face a tough test in the fall.

These women are hoping to lead their state

Here are the women nominees for governor so far:

Georgia governor’s race: Democrat Stacey Abrams would be America’s first female African-American governor, if elected. Progressive groups are very excited about Abrams, but she’s not exactly a political outsider; she served as the former minority leader of the Georgia House of Representatives and had a lot of support from national Democrats.

Idaho governor’s race: Democrat Paulette Jordan is attempting to be the first Native American to receive a nomination for governor in the nation. She’s running on an unabashedly progressive platform, which could complicate her chances of winning in conservative Idaho.

Kansas governor’s race: Democrat Laura Kelly, a state senator, is viewed as a moderate Democrat, which isn’t surprising in conservative Kansas. She’s up against super-conservative, Trump-like Republican Kris Kobach in the general election.

Maine governor’s race: Democrat Janet Mills is the state’s former attorney general and a longtime legislator. She is seen as fairly liberal and is known for fighting the state’s current conservative Gov. Paul LePage on issues ranging from health care to declining LePage’s past requests to sue the Obama administration. Mills would be the first woman elected to the state’s highest office.

Michigan governor’s race: Democrat Gretchen Whitmer previously served as the Democratic leader of the state Senate and in the state House before that. Though progressive candidates painted Whitmer as moderate during the primary, her record shows she’s fairly liberal on issues including health care and women’s rights.

New Hampshire governor’s race: Democrat Molly Kelly. Kelly served as a state senator for 10 years, from 2006 to 2016. During her time in the legislature, Kelly served on the Governor’s Commission on Alcohol and Drug Abuse Prevention, Intervention, and Treatment, focusing on the state’s opioid crisis. She’s running on a New Hampshire brand of progressivism — one that includes not raising taxes (a longtime pledge from Republican and Democratic gubernatorial candidates alike).

New Mexico governor’s race: Democrat Michelle Lujan Grisham, a current Congress member and chair of the Congressional Hispanic Caucus, is a well-known entity in the state, and she had the overwhelming support of the state party during the primary. Though the state already has a Latina governor, she’d be the first Latina Democrat elected to the governor’s mansion.

Texas governor’s race: Democrat Lupe Valdez would be the first Latina governor in the state, if elected. She’s trying to appeal to the state’s Latino population and running on a message of anti-corruption. But Gov. Greg Abbott is a popular incumbent and will be tough to beat in November.

Vermont governor’s race: Democrat Christine Hallquist made history as the first transgender woman to get on the gubernatorial ballot. She’s fairly liberal but has a tough race against moderate Republican Gov. Phil Scott, who is popular among the state’s Democratic voters.

Wyoming governor’s race: Democrat Mary Throne is a former Democratic leader in the state Senate who is running as a moderate on her bipartisan track record. She faces steep odds in conservative Wyoming.

There are two more women candidates who could nab the nomination this week: Rhode Island incumbent Gov. Gina Raimondo is hoping to fend off a primary challenge on Wednesday, and former actress Cynthia Nixon is hoping to give Gov. Andrew Cuomo a run for his money in New York.

Many women are running for Congress, but it’s important they also run for state office

Much of the hype about women running in 2018 has been centered around Democrats’ hope to take back the US House of Representatives. But statehouses and governor’s mansions are equally important — especially since they are dominated by Republicans.

There are currently 33 Republican governors, compared to just 16 Democrats (plus a lone independent, Alaska Gov. Bill Walker). National Democrats are especially zeroing in on 13 of these states in 2018 because they are ones former President Barack Obama won.

After years of focusing on winning the White House and Congress, Democrats let state politics languish. Republicans were able to capitalize on that, building formidable majorities in state legislature races over the course of the 2010 and 2014 midterms. In addition to the 33 Republican governors in office, Republicans currently control 66 out of 99 state legislative chambers in the United States. That means they have been able to pass a lot of conservative legislation, including bills that directly impact women.

One such law, a ban on abortions after 15 weeks, was signed by Mississippi Gov. Phil Bryant in March. More states have moved to restrict abortion since: on May 4, Iowa Gov. Kim Reynolds signed a bill banning abortions after a doctor can detect a fetal heartbeat, or as early as six weeks. A Kentucky law signed by the governor in April limits certain types of procedures for patients pregnant for more than 11 weeks, and a law recently passed in Indiana would require doctors to report patients’ personal information to the state.

As North notes, one of these bills was signed into law by a woman governor — Iowa’s Kim Reynolds. But the fact remains that the vast majority of these laws impacting women’s health and right to choose are being passed and signed into law by men. Political science research has found that when women are in charge politically, it’s more likely they will introduce bills that benefit women on issues ranging from women’s health to pay equity.

“Women in Congress are just more likely to prioritize issues that have a direct connection to women — violence against women, family leave policy, those kind of things,” Georgetown University political scientist Michele Swers told Vox’s Sarah Kliff. “The more you can directly connect the consequence to women, the more you see female legislators getting involved.”

As women run for office in record numbers in 2018, the crop of candidates for governor is trying to bring new leadership to statehouses around the nation — which could have a direct impact on their female constituents.

Correction: A previous version of this story said Kansas had never before elected a female governor. It has elected two, Joan Finney and Kathleen Sebelius.

America is still failing on coronavirus testing
The former ambassador to Ukraine says she was ousted because of her anti-corruption work
Poll: A majority of voters want Joe Biden to advance polices that promote gender equity
Vox Sentences: Hollywood turns its back on Georgia
No cops were charged with Breonna Taylor’s death. This is how the system was designed.
Spotify is buying Bill Simmons’ The Ringer to boost its podcast business