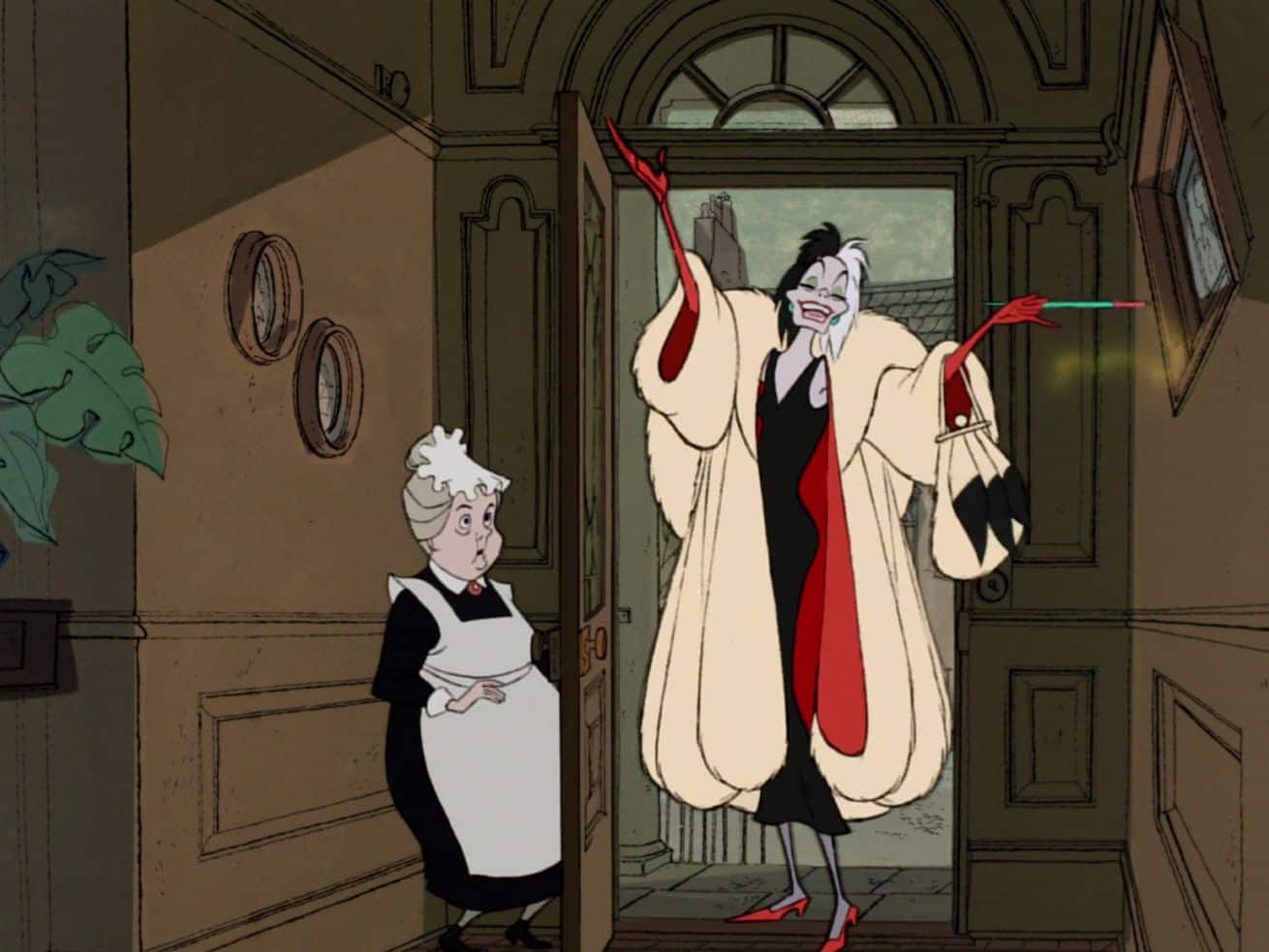 Cruella de Vil has been a style icon since she first set foot on the page.

Is there a children’s villain out there with more style or panache than Cruella de Vil? Her fabulous car, her cigarette holder, her long red gloves — as a child, I longed to have a rotary phone to dial with the cigarette holder, just like Cruella does in Disney’s 1961 animated film One Hundred and One Dalmatians. She is pure wicked glamour with skunk-streak hair.

In honor of Disney’s new Cruella movie, I went back to the books that started it all. Disney’s One Hundred and One Dalmatians is based on a 1956 children’s novel by Dodie Smith, whose most celebrated work, 1948’s cult favorite I Capture the Castle, includes extended musing on clothes and furs and why both matter so much. Smith knew style was important — and she wrote Cruella’s style in The Hundred and One Dalmatians with so much villainous glee, our dear Mrs. de Vil fairly takes over the whole book. She doesn’t have that many scenes, but those she does have are unforgettable.

Smith’s Cruella is, by the way, married. Her husband is a nonentity who barely speaks, which is perhaps why he doesn’t appear in any of the Disney adaptations. Such is Cruella’s commitment to her vibe that she made him take her name instead of the other way around. (Cruella Smith simply wouldn’t have had the same ring to it.)

Mr. de Vil “didn’t seem to be anything but a furrier,” Smith writes cattily, and Cruella married him for access to furs. Furs are essential to her lifestyle because she is always cold, and Smith strongly implies that nothing short of hellfire will ever be quite hot enough for her. (The Hundred and One Dalmatians is a very Anglican book, and I will warn you now that, similar to many other English children’s books of its era, the novel’s anti-Semitism is only barely coded.)

In her pursuit of warmth, Cruella travels everywhere in what Smith describes every time as “an absolutely simple white mink cloak,” and at one point appears wearing a brown mink coat underneath her existing cloak, along with a fur hat, fur gloves, and fur boots. Every night she sleeps between ermine sheets. Moreover, she flavors all her food — including ice cream — with nothing but pepper, and when the Dalmatians bite her, they discover that she too tastes of pepper.

Cruella’s style doesn’t extend only to ingenious ways to beat the cold, though. She drives a car painted in black and white stripes to match her hair. (Her hair was black and white even when she was a small child, we learn, and she wore it in one black plait and one white plait.) In her home, a green marble hall leads into a red marble drawing room (Christmasy!), and her dining room has black marble halls and a white marble table.

And then, of course, there are her clothes.

Here’s how Smith describes Cruella in her first appearance: “She was wearing a tight-fitting emerald satin dress, several ropes of rubies, and an absolutely simple white mink cloak, which reached to the high heels of her ruby-red shoes. … Her hair was parted severely down the middle and one half of it was black and the other white—rather unusual.”

Served with this utter look, our ostensible hero Mr. Dearly, whose dogs Cruella will shortly steal, peers down his nose and says, “Isn’t she a bit showy?” and truly, I don’t see how Smith could have expected anyone to root for him after that.

Regardless, by the end of The Hundred and One Dalmatians, the Dearlys and their dogs do defeat Cruella, leading her to flee England in disgrace. But Cruella makes a triumphant return in the sequel, 1967’s The Starlight Barking.

The Starlight Barking is not really about Cruella, who appears in only a single scene for a glorified cameo. (What the book is actually about is bonkers, by the way, and I don’t think I could spoil it if I tried.) Still, she makes every moment of it count.

The Cruella who returns in The Starlight Barking is now an entrepreneur in her own right. She runs a company called Cruella de Vil & Co.: Makers of Kloes that Klank, which the Dalmatians, who are also bad spellers, are able to decode as “Clothes that Clank.”

Cruella’s clothes now clank because, having abandoned fur after losing to the Dalmatians in the previous book, Cruella has since embraced tin. With characteristic commitment, she now sleeps on tin sheets. She is manufacturing and selling tin raincoats, which come “in bright colors, scarlet, emerald, sapphire, flame” and have sharp cutting edges. Perhaps relevant to Cruella’s interests after the Dalmatians ripped all her old furs into pieces, they are also unbreakable.

Cruella is a fashion visionary, and I am willing to accept that she knew something the rest of us didn’t. If the new Cruella movie becomes a hit and inspires a Cruella-centric take on The Starlight Barking, will 2021 mark the moment the rest of us finally start dressing in tin?

How the pandemic is bringing Elon Musk’s dream to connect everyone on Earth closer to reality
Emoji reveal more about you than you think
How a homemaker with no political experience took on Europe’s longest-serving dictator
The rise in murders in American cities, explained
Trump’s Justice Department is threatening cities that allow safe injection sites
An ex-cardinal has been defrocked for sex abuse. This has likely never happened before.