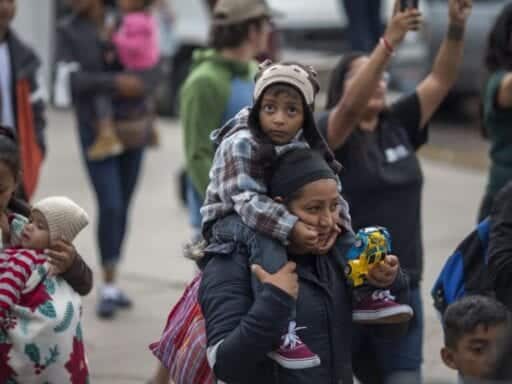 The Central American migrants who sparked Trump’s panic faced attacks in Mexico — and threats of deportation — while waiting to seek asylum in the US.

The Trump administration’s crackdown at the US-Mexico border — which culminated in widespread separation of families — started when President Donald Trump freaked out about a “caravan” of hundreds of Central American migrants crossing through Mexico to seek asylum.

As the caravan of asylum seekers made its way toward the US, the president raged at foreign governments and his own officials to do more to stop people from coming to the US without papers. By the time a few hundred caravan members finally arrived at the US-Mexico border at the San Ysidro port of entry, the administration had committed to restricting asylum by closing “loopholes” and to prosecuting everyone who entered the US illegally (without papers between official ports of entry) — the elements of a crackdown that’s affected tens of thousands of asylum seekers in recent months, even after the administration stopped separating families en masse in late June.

But what happened to the actual caravan members, once they got to San Ysidro? A report from Amnesty International released last Thursday tells part of the rest of the story. And it’s alarming.

Amnesty (which sent researchers to San Ysidro in May to track the caravan) alleges that some caravan members forced to wait in Mexico were attacked by Mexican municipal police, and that a shelter harboring some of them was robbed in a homophobic hate crime. It claims that a senior Mexican official was told by the US to clear the asylum seekers from the plaza where they were waiting to be allowed to enter the port — and, implicitly, to deport anyone whose Mexican travel documents had expired while they were waiting.

There isn’t evidence that caravan members were treated punitively because they were part of the caravan. To the contrary, what Amnesty documents is that the policies the Trump administration has implemented to attempt to deter would-be asylum seekers or apprehend them before they arrive in the US — policies enacted partially in response to the caravan, but which have affected many thousands of asylum seekers in their wake — are, in fact, having the effects human rights advocates warn about. The administration is making a dangerous journey no less common, but even more dangerous.

In April 2018, the nonprofit Pueblos Sin Fronteras launched its annual Central American migrant caravan — a group of hundreds of asylum seekers from the Northern Triangle of Central America (Guatemala, Honduras and El Salvador) traveling together through Mexico to the US to draw attention to the plight of the hundreds of thousands of asylum seekers who make that journey and to maintain safety in numbers.

The caravan was larger than in previous years (at its peak, there were more than 1,000 members) and the safety-in-numbers strategy worked: Instead of detaining or disappearing the asylum seekers, as Mexican immigration authorities often do to Central American migrants, authorities simply allowed the group to cross into Mexico without resistance.

That’s when cable news got ahold of the story. And, from there, Trump.

Trump’s obsession with the caravan surfaced in tweets and in impromptu remarks to reporters.

It led him to alternately cajole and threaten both the travelers’ countries of origin — largely Honduras, with some from Guatemala and El Salvador — and Mexico, which ultimately acted to disperse the caravan. By the time the caravan reached the San Ysidro port of entry south of San Diego, only a few hundred migrants were left; they were admitted to present themselves for asylum slowly, over the course of several days.

The caravan also redirected Trump’s attention, and rage, to the border. Border apprehensions had been rising for several months since Trump’s first months in office (when they were shockingly low). But in the wake of the caravan and its extensive coverage, what followed was a multi-pronged attack, from “zero tolerance” prosecutions for illegal crossings to a slowdown in processing for asylum seekers trying to enter legally.

That attack continues to this day — even as the number of families seeking asylum has increased to unusually high levels. The surge reportedly has the administration considering a revival of family separation, in the form of a “binary choice” for parents between keeping their children in immigration detention for months or years and sending them into the custody of Health and Human Services. And politically, the idea that huge groups of migrants are swarming the border sits at the heart of Trump’s case for Republicans in the midterm elections.

Meanwhile, a new “caravan,” headed from Honduras, is reportedly bound for the United States — and already attracting the attention of the Trump administration. ““The current reporting on the migrant ‘caravan’ from Honduras is what we see day-in and day-out at the border as a result of well-advertised and well-known catch-and-release loopholes,” said Department of Homeland Security spokesperson Katie Waldman.

But for all the attention to the original caravan, once it arrived in San Ysidro it all but faded from Trump’s — and the public’s — attention. The Amnesty report, compiled by researchers who were on the ground (on both sides of the border) as the caravan arrived, picks up the story.

On April 29, the caravan arrived at the San Ysidro port of entry, and members began to present themselves for asylum. (It’s legal to seek asylum in the US even if you don’t have papers, and people who present themselves at ports of entry aren’t violating any laws. In fact, Homeland Security Secretary Kirstjen Nielsen and others have defended their crackdown on asylum seekers who cross into the US illegally by saying that the asylum seekers ought to be presenting themselves at official crossings.)

US officials didn’t allow them to enter the country. They claimed that there wasn’t enough capacity at the port to process them for asylum. They began admitting caravan members, a few at a time, over the next several days — a policy of “metering” that has continued since then at San Ysidro and other ports of entry and forced asylum seekers to wait in line for days or weeks (often keeping track of their place in line themselves).

According to the Amnesty report, two members of the caravan — both transgender women from Guatemala — were detained by Mexican local police after getting turned away from the port of entry when they arrived. They were in jail for more than 24 hours. One of the women told Amnesty researchers that the other one claimed the police beat her up — and that she had a wound on her neck as evidence she was telling the truth.

Other LGBTQ immigrants from the caravan ended up in a nearby shelter while waiting to be allowed to enter the US. One night, according to Amnesty, their shelter was robbed — and the door set on fire — by a group of six armed men. A representative for the shelter told Amnesty that a few hours after the robbery, the men returned, “shouting homophobic slurs at the asylum-seekers, and threatened to kill them if they did not leave the neighborhood.”

This account of Mexican treatment of asylum seekers is seriously at odds with the Trump administration’s contention that Mexico is safe for Central American refugees, and that, therefore, they should remain there rather than trying to enter the US. The administration is pressing Mexican officials to sign an official “safe third country” agreement that would allow the US to refuse entry to any asylum seeker coming through Mexico, on the logic that Mexico is a safe place to seek asylum. (They’re expected to make another push on this once President-elect Andrés Manuel López Obrador comes to power in December.)

If these things happened to one group of asylum seekers over several days, it’s worth asking what would have happened to them if they were told to stay in Mexico indefinitely.

At the same time that the Trump administration wants to label Mexico a safe country for Central Americans to seek asylum, however, it’s pressuring Mexico to arrest and deport more of them.

While Mexico’s asylum laws are theoretically generous enough that they would allow many Central American asylum seekers to stay, human rights observers have consistently found that that’s not what happens: Mexico has detained and deported nearly a million Central American migrants in recent years, often without telling them they can apply for asylum and in some cases after detaining or even torturing them.

Under both Obama and Trump, the US has pressured Mexico to take an active role in catching and deporting Central Americans. The Trump administration reprogrammed $20 million in foreign aid in September to send to Mexico to pay the transportation fees to deport up to 17,000 Central American migrants.

The Amnesty report alleges, citing two Mexican officials, that the US has even urged Mexico to detain and deport people who are in line to seek asylum in the US — people, in other words, who have tried to enter the US and been prevented because officials claim there’s no room for them.

A top regional official for Mexico’s immigration authority, abbreviated the INM, told Amnesty International in May that the US had asked INM to “sweep” the area where caravan members were waiting, including the turnstiles in front of the official entry hall (where 20 caravan members were waiting) and the plaza beyond. The Mexican official said that “implicit” in the request to sweep the area was a suggestion to detain and deport any asylum seekers whose Mexican travel visas had expired:

“Everybody knows their [transit] visas are about to expire,” the INM delegate elaborated. “If I go out there right now, and do an immigration sweep on the plaza,” he estimated that 40 percent of the asylum-seekers would not have legal status to be in Mexico, and could be at risk of deportation.”

Of course, it would make sense that some caravan members were no longer legally present in Mexico because they hadn’t been expecting to still be in Mexico. They were at risk of losing their legal presence in Mexico because they were being forced to stay there in order to cross legally into the US — and then detained and deported for trying to follow US law.

When migrants enter the US between ports of entry, Trump officials say they have chosen to break the law. But advocates counter that if they have no real opportunity to enter at ports of entry, it’s not really a choice — it’s survival.

Republican candidate Corey Stewart said Trump was “standing up to the Russians.” The audience couldn...
Facebook and YouTube will keep letting politicians say what they want if it’s “newsworthy”
All the things Trump talked about at his rally instead of Manafort or Cohen
“I don’t want to be a depressing drumbeat”: TV comedy legend Greg Daniels on his daring new shows
“It’s kinda like a first date”: How to make the most of starting a new job remotely
Elizabeth Warren says she lost her job when she got pregnant. Thousands of women every year say the ...