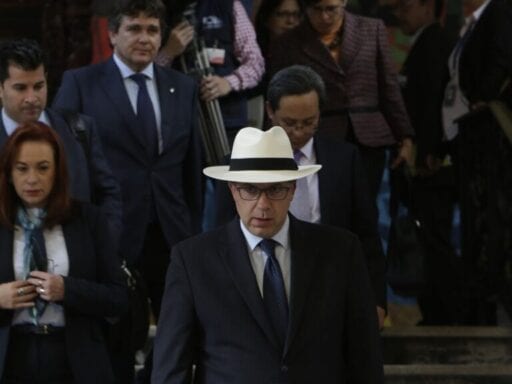 The Trump administration has been accused of attempting to pressure another foreign country into helping Trump’s reelection prospects, according to a letter from the House Foreign Affairs Committee.

In the letter, Foreign Affairs Committee chairman Rep. Eliot Engel demands Chapman explain an article in which the ambassador is said to have asked for the tariffs to be lowered as a “favor” from the Brazilian government to the Trump reelection campaign.

“Iowa is the largest ethanol producer in the United States…and could be a key player in Trump’s election,” an article in the Brazilian newspaper O Globo reads, according to the letter. “Hence the importance – according to Chapman – for the Bolsonaro government to do the U.S. a favor.”

Beyond the report in O Globo, the New York Times notes, another Brazilian outlet, Estadão, published a similar story based on its own reporting, with its journalists finding that Chapman had made the request, and was rebuffed by Bolsonaro administration officials.

Alceu Moreira, a Brazilian congressman, also told the Times that Chapman “had made repeated references to the electoral calendar during a recent meeting the two had about ethanol.”

Engel has called for Chapman to respond to the reports by August 4, and that he provide “any and all documents referring or related to any discussions” with Brazilian officials.

If the reports are accurate, the letter states, Chapman’s actions could be in violation of the Hatch Act, which prevents federal employees from engaging in political activities, such as campaigning for candidates.

A State Department spokesperson said in a statement that Chapman’s efforts were part of a policy of pushing for lower tariffs in general, not narrowly focused on supporting an incumbent presidential campaign.

“Allegations suggesting that Ambassador Chapman has asked Brazilians to support a specific U.S. candidate are false,” the statement reads. “The United States has long been focused on reducing tariff barriers and will continue do so.”

The reports are also of concern because of how closely they echo the request that led to Trump’s impeachment.

Last July, Trump asked Ukrainian President Volodymyr Zelensky to “do us a favor” during a phone call in which he asked the leader to look into the business dealings of Hunter Biden, the son of then-candidate, now presumed Democratic-nominee Joe Biden. In that call, Trump appeared to condition military aid badly needed by Ukraine on Zelensky’s willingness to search for information that might be used to discredit Biden.

A congressional investigation into that call revealed the ways the Trump administration used traditional diplomatic channels — most notably the office of the US ambassador to the European Union — to forward that goal.

It isn’t clear whether Trump was involved in Chapman’s reported pressure campaign about ethanol, but as Vox’s Zack Beauchamp wrote during 2019’s impeachment hearings, the testimony of another of Trump’s ambassadors — US ambassador to the European Union Gordon Sondland — showed a willingness on Trump’s part “to use US foreign policy as a tool to cement his own hold on power.”

In delivering that warning, the letter explicitly links Chapman’s reported campaign to the 2016 election, the outcome of which foreign governments repeatedly attempted to sway, according to the results of a Senate investigation.

“Given the events of 2016, it is all the more important for U.S. ambassadors serving our country abroad to not insert themselves into U.S. elections or encourage foreign government officials from any branch of government to do so,” the letter reads.

And this warning follows intelligence reports that find Russia has actively worked to disrupt November’s elections — as well as the Democratic presidential primary. But politicians and experts have warned that the US is not as prepared as it ought to be to combat such interference, leaving it vulnerable to meddling attempts not just by adversaries, but by also by Americans who, as Engel writes, “should know better.”

MacKenzie Scott is donating her billions much faster than her ex Jeff Bezos
Mitt Romney’s statement on the Charlottesville anniversary strikes a chord Trump cannot
Trump’s DOJ just escalated the fight over whether religion is a license to discriminate
Mick Mulvaney says Trump is actually prepared to let the government shut down again
Jeremy Corbyn will resign as party leader after Labour’s crushing defeat
Democrats’ impeachment agita, explained

10 facts about school reopenings in the Covid-19 pandemic

There are proven ways to keep protests peaceful. Trump is doing the opposite.