The US and Mexico made a trade deal. But it’s not a new NAFTA. 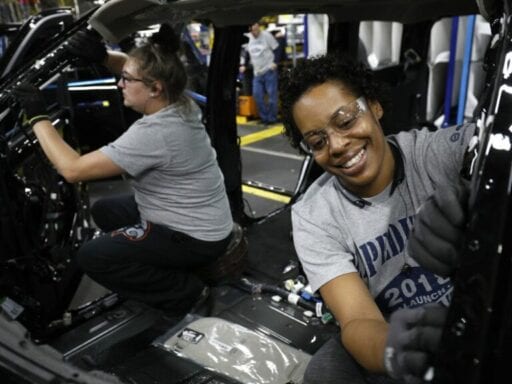 President Donald Trump is treating this as a major victory. It could lead to one down the line — but it isn’t one right now.

The United States and Mexico just reached a preliminary deal to reform NAFTA — but there’s still a long way to go.

On Monday, multiple outlets reported that Washington and Mexico City had reached an agreement to revise the North America Free Trade Agreement — a deal that President Donald Trump hates and has criticized loudly in the past.

The new agreement makes it so most parts of an automobile traded without tariffs — taxes imposed on a particular set of items — must be made in factories that pay their workers higher wages.

That could potentially increase the number of jobs in American car plants, where workers are paid more than in Mexican factories.

It’s certainly the most important development so far in the year-long negotiations to revise NAFTA, as it clears the way for Canada — the other NAFTA member — to rejoin talks after a five-week absence. Trump said the deal is named the US-Mexico Trade Agreement and then called Mexican President Enrique Peña Nieto to congratulate him on the accord.

However, experts following the talks say that the latest development isn’t a major victory. “I wouldn’t say that the US and Mexico have really reached a NAFTA deal,” Christopher Wilson, a NAFTA expert at the Wilson Center think tank in Washington, DC, told me. Instead, both sides just solved a stingy bilateral trade issue, but not the larger multilateral one with Canada.

The countries involved are closer to achieving Trump’s dream of a changed NAFTA that mostly helps America, but still not that close — which means the president may be celebrating too early.

“There is still a long road ahead,” says Wilson.

Why Trump can’t claim a major NAFTA victory — yet

The first thing to note is that there are three members in NAFTA: the US, Mexico, and Canada.

But the current talks in Washington didn’t include Ottawa, and since the agreement mostly affects US-Mexico bilateral trade, they don’t yet alter NAFTA in a significant way.

Canada has purposefully stayed out of talks for weeks because it wanted the US and Mexico to resolve some of their trade problems. “Once the bilateral issues get resolved, Canada will be joining the talks to work on both bilateral issues and our trilateral issues,” Chrystia Freeland, Canada’s foreign minister, told reporters on Friday.

One of the issues Canada will certainly want to discuss is how to resolve trade disputes between NAFTA countries.

In addition to this, changes to NAFTA require congressional approval. Many members of Trump’s own Republican Party bristle at anything that may interfere with free trade, so the changes that the US and Mexico have agreed upon aren’t guaranteed to pass.

“The next step to advance the economy requires that we keep NAFTA in place, but modernize it to better reflect our 21st century economy,” 36 GOP senators, including Majority Leader Mitch McConnell, wrote to Trump in January. “We look forward to working with you and your administration to make that modernization a reality and bring Americans even greater economic success.”

Trump, for his part, has repeatedly called NAFTA the “worst trade deal ever made” and has threatened to withdraw the US from the deal. But now that Mexico and Canada seem willing to be flexible on some issues, it’s possible the US will benefit from an altered deal, in the form of more jobs, for example. If this happens, Trump could claim he fixed NAFTA for America’s benefit, and will likely declare the negotiations a victory.

But right now, it’s way too early to do so.

The astonishing effects of the shutdown, in 8 charts
Stacey Abrams makes the case for herself as Biden’s VP pick
The Trump administration reportedly wants to push countries to decriminalize homosexuality
Why Republicans are suddenly in a rush to regulate every trans kid’s puberty
Recording the Company cast album was infamously hellish. This cult favorite doc captured it all.
The manufactured outrage over Barron Trump, explained