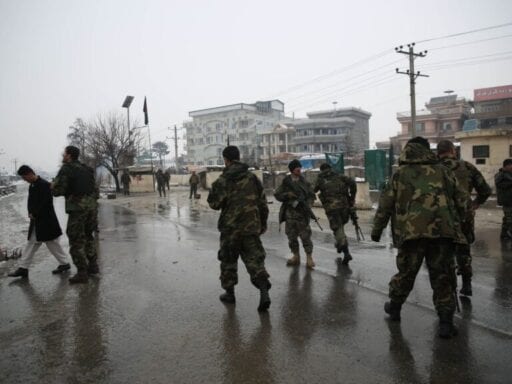 Share
Loading...
Afghan security forces at the site of a suicide attack on February 11, 2020. | Xinhua/Xinhua Kabul via Getty Images

A seven-day reduction in violence will be the first test of whether a formal deal is possible.

The United States and the Taliban have reached a deal that could be the start of ending America’s longest-running war.

This is not a peace agreement, but rather something of a pre-agreement. The US and the Taliban have agreed to a seven-day “reduction in violence” pact, a US official confirmed Friday to media outlets.

It’s not clear when this deal will take effect, per NPR, or how it will be measured, according to the Wall Street Journal.

But the violence reduction deal is intended as a test of whether a more lasting ceasefire might be possible, according to a senior Afghan official. What a lasting ceasefire — specifically one between the Afghan government and the Taliban — might look like, and how it might be implemented, is much murkier.

If this reduction in violence is successful, the US and the Taliban could sign an agreement that leads to the gradual drawdown of the 12,000 US troops that remain in the country, which in turn would precipitate the Taliban and the Afghan government beginning formal negotiations on a political settlement.

“But how all it gets stitched together — if it does — isn’t clear,” James Cunningham, nonresident senior fellow at the Atlantic Council and former ambassador to Afghanistan, told Vox.

The US and the Taliban came close to a peace deal in 2019, which would have withdrawn US troops from the country and would have required the Taliban to publicly rescind its support for terrorist groups ties and enter into talks with the Afghan government over power-sharing. The Afghan government objected to being largely left out of these discussions and wanted a more permanent ceasefire, with conditions.

Abruptly, in September, President Trump said on Twitter that he halted peace talks after a Taliban attack in Kabul left one US service member and 11 other people dead. Trump said he had planned to fly Taliban leaders to Camp David for the signing, before he made an about-face.

But the US government and Taliban have renewed efforts to try to reach an agreement, potentially putting an end to a nearly two-decade war on Trump’s watch.

“We’ve said all along that the best, if not the only, solution in Afghanistan is a political agreement. Progress has been made on that front and we’ll have more to report on that soon, I hope,” Defense Secretary Mark Esper said Thursday.

“It is our view that seven days for now is sufficient but in all things our approach to this process will be conditions based,” he added.

Trump seemed buoyed at the chances of success, saying on Geraldo Rivera’s podcast Thursday that there was a “good chance” for a deal.

Earlier this week, Afghan President Ashraf Ghani said Secretary of State Mike Pompeo had told him of “notable progress” in talks with the Taliban. “This is a welcoming development and I am pleased that our principal position on peace thus far has begun to yield fruitful results. Our primary objective is to end the senseless bloodshed,” he said.

What does this all mean for America’s longest war?

Given that there’s little appetite for putting more troops on the ground, a negotiated settlement between the Taliban and Afghan officials would likely be the best possible outcome after years of war — but it is still a long way away.

Last year, even as the US and the Taliban were trying to negotiate a deal, Afghanistan witnessed extraordinary violence, which some saw as the Taliban’s attempt to gain leverage.

The Taliban had also previously rejected a full ceasefire in Afghanistan, so this reduction of violence agreement seems to be the nearest test as to whether the Taliban is capable of sustaining a reduction in hostilities, or at least enough to pave the way for more robust negotiations to begin.

This, again, is going to be no easy feat. Last time around, the Afghan government objected to being left out of US-Taliban negotiations. And as NPR reports, the Taliban has said it wants Afghan officials to participate as citizens, since it does not formally recognize the government in Kabul.

The United States has been at war in Afghanistan for 18 years, and it still has about 12,000 troops committed there. Trump has made it clear he wants to pull troops out of the country, something two previous presidents have failed to achieve.

But the Atlantic Council’s Cunningham warns that it’s dangerous for the White House to race into a deal just to get troops out. “Americans should not want to see a rush to complete withdrawal without a political settlement,” he said.

The Trump administration, especially with the 2020 election looming, might be eager to declare victory by bringing troops home from Afghanistan and signing some sort of peace treaty with the Taliban. But success — for the US, for Afghanistan, and, most importantly, for the Afghan people — is likely going to be an uncertain and precarious process.

One of the best ways to fight Covid-19: Wash your hands
It looks like the Buffy revival will focus on a new Slayer
Australia wants the US to investigate a police attack on 2 Australian reporters
Inside the DOJ’s struggle with Trump’s demand for a “Spygate” investigation
A Republican lawsuit could force Wisconsin to reopen immediately
Has Sweden found the best response to the coronavirus? Its death rate suggests it hasn’t.