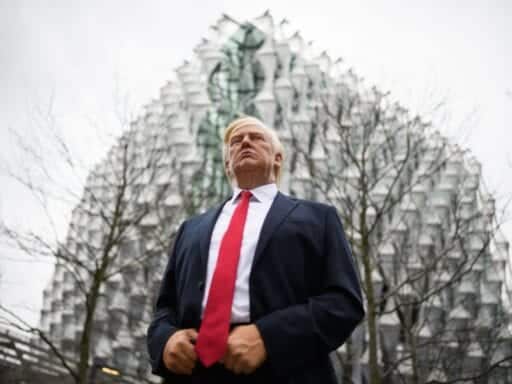 But it’s not necessarily a reflection on the president.

The US Embassy in London is warning Americans to “keep a low profile” when President Donald Trump visits the UK from July 12 to 14.

Here’s why: Protesters who disagree with the US president’s policies are planning to stage multiple demonstrations during Trump’s trip. Most are set to take place on July 13, when Trump meets UK Prime Minister Theresa May and Queen Elizabeth.

And while this might sound extreme, it’s actually not. There are two reasons why.

“There’s nothing particularly noteworthy about the alert. We send these out all the time,” Courtney Austrian, a spokesperson for the US mission in London, told me.

That practice dates back to 1998, when a terrorist blew up Pan Am Flight 103 in an incident now known as the Lockerbie bombing. (The plane exploded over Lockerbie, Scotland.) There were allegations afterward that the US government told employees it had intelligence of a terrorist attempt, which prompted officials to change their flight plans. It’s unclear if those claims were true or not.

But since those allegations, US embassies around the world now give the same warnings to citizens as they do to employees, says Austrian. She added that embassy staff gets warnings like this all the time for mass demonstrations, which is why there is a warning now for all Americans.

Wherein the US Embassy in London advises Americans to “keep a low profile” while Trump is in the country pic.twitter.com/DRQSYYZdSr

The second reason the warning is not a big deal is that people in the UK have protested other US presidents when they visited in the past.

When President George W. Bush visited the UK in November 2003, he had to contend with large-scale anti-war protests. Bush, along with then-Prime Minister Tony Blair, led the effort to invade Iraq. President Barack Obama also faced protests when he visited the UK, in part over his alleged crimes against Muslims in the Middle East. The embassy sent out similar messages of caution in those situations as well.

The US mission in London anticipates having to send a similar message soon, depending on how the World Cup turns out on Wednesday: “If England gets into the World Cup, I expect we’d send an alert out as well,” Austrian told me.

Even if the warnings are not out of the ordinary, there is certainly a growing British resistance to Trump.

As Madeleine Ngo wrote for Vox, British citizens crowdsourced more than $23,000 to buy a plump orange balloon that resembles an angry baby Trump wearing a diaper to display in London. However, Trump plans to avoid the British capital for much of his four-day trip to the UK.

Trump may have to turn the radio off, too. Protesters also started a campaign to get people in the UK to buy and stream the Green Day song “American Idiot” so when Trump lands on Thursday, the song will be at the top of the music charts.

It seems to be working: The single is already number one on Amazon UK’s bestseller list, and as of Tuesday, it’s climbed to number 18 on the UK’s official charts.

There’s a simple reason all of this is happening: “He’s extremely unpopular here,” Austrian tells me about Trump.

The embassy’s warning to Americans, then, may be normal — but the resistance to Trump in the UK looks very out of the ordinary.

From FDR to Obama: A look back at inaugural traditions
Live stream: President Trump presents the Medal of Honor
Facebook is finally cracking down on QAnon
Black kids are watching this moment. What will it teach them?
Everybody Covered
Vox Sentences: Leviathan, or Mudcarp