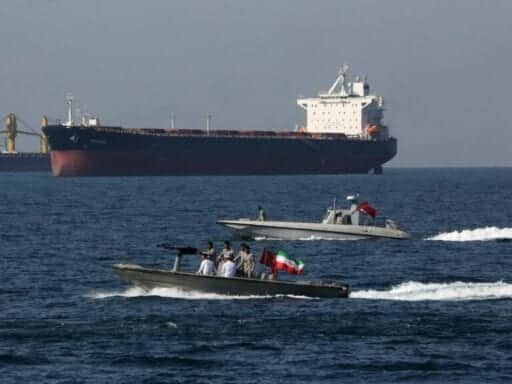 “Beware of what you’re walking into, because nothing good happens in the Strait of Hormuz,” said a retired three-star admiral.

The Trump administration is planning to send US Navy ships to help escort oil tankers in the Gulf in order to protect them from possible Iranian aggression. But some experts warn the move could cost a lot of money and risk pulling the US and Iran into a war neither wants.

According to the Chairman of the Joint Chiefs of Staff Gen. Joseph Dunford and Gen. Mark Milley, the man tapped to replace Dunford, the US is working to build an international coalition whose navies will work together to protect oil tankers moving through the Strait of Hormuz — a vital waterway for the global energy trade — and adjoining seas.

The current plan is for the US to send “command and control” ships to the area that will help lead the effort and for other countries’ vessels to do the actual escorting of the tankers.

“Escorting in the normal course of events would be done by countries who have the same flag, so a ship that is flagged from a particular country would be escorted by that country,” Dunford told reporters Tuesday. “What the United States is uniquely capable of providing is some of the command and control, some of the intelligence, surveillance and reconnaissance.”

It’s unclear exactly how involved the US ships will actually be in the operations, though, and which countries the US plans to work with. It’s also unclear exactly whose oil tankers this new coalition will be tasked with protecting.

This new effort is a response to a recent spate of suspected attacks on oil tankers in recent months that the US and others have blamed on Iran (a charge Iran denies). Six oil tankers sailing through that region have been damaged since May in apparent sabotage operations amid a months-long standoff between the US and Iran.

And just this week, the United Kingdom said it had thwarted an Iranian attempt to block a British tanker from proceeding in the Strait of Hormuz. According to the Washington Post, the tanker was approaching the northern entrance to the strait when the British naval ship accompanying it “was forced to position herself between the Iranian vessels” and the ship, a government statement said. Tehran has also denied any involvement in that episode.

These incidents are why some experts say the Pentagon’s plan, if enacted, may be necessary right now. “Given the current situation, this probably makes sense to deter future Iranian attacks,” Ilan Goldenberg, the Defense Department’s Iran team chief from 2009 to 2012, told me.

This all sounds very similar to when the US in 1987 escorted Kuwaiti ships traveling through the Gulf while the Iran-Iraq war raged. Then-President Ronald Reagan proceeded with the operation, known as Operation Earnest Will, despite congressional concern that doing so might get the US involved in conflict.

It’s possible President Donald Trump may receive the same backlash — especially since escorting ships is much harder in practice than it sounds in theory.

The danger of escorting ships in troubled waters

Military planners during the Reagan years worried about the challenges of sending American ships to the Gulf during such a tense time. In heated debates, US officials worried about what would happen if an Iranian vessel approached an American-escorted tanker. Should America shoot first or second?

Ultimately, a decision was made to allow US Navy ship captains to take all necessary measures to protect the vessel they were escorting from attack. That didn’t satisfy everyone in the Reagan administration — some worried about a captain making a costly mistake — but that was the final order.

These are the kinds of discussions and debates the Pentagon will now need to have about what US Navy ships can and can’t do to defend the tankers they’re helping protect. It’s a complicated, expensive, and risky endeavor, experts tell me.

Retired Navy Vice Adm. Michael Franken, who served on a US warship during Operation Earnest Will, told me there aren’t enough vessels to escort every single tanker individually, one by one. That means multiple tankers may have to wait outside the entrances to Gulf waters until an escorting ship can take a group together, making it more complicated to protect them all.

And, of course, the more US Navy ships there are in the region, the more likely it is that something could go wrong.

“A greater US presence also means higher risk of an inadvertent run-in or miscalculation at sea that leads to conflict,” says Goldenberg, now at the Center for a New American Security think tank in Washington, DC. “Iran will likely try to avoid a direct confrontation with the US military, but it will continue to test the limits. We should expect it to continue on occasion to target non-American ships with mines or use provocative harassment tactics from its small boats.”

Mines, which can be triggered by sound, pressure, or magnetism, make the operation especially dangerous. It’s possible that even an escorted ship hits a mine — or one is planted on it — causing an explosion and potential loss of life. Franken, now at the Stimson Center think tank in Washington, was on a warship behind SS Bridgeton, a supertanker traveling through the Persian Gulf in 1987, when a mine blew part of it up.

He told me he worries about what the US response would be if something like that happens again. “Mining in international waters is an act of war,” he said. It’d be hard at that point for the Trump administration to ignore the bombing, potentially leading Washington and Tehran to war.

That’s why Franken has a word of warning for the Pentagon: “Beware of what you’re walking into, because nothing good happens in the Strait of Hormuz.”

“It’s not going to create or take away a single job”: Why Trump’s excuse on the Saudis doesn’t hold ...
These AI-generated coronavirus memes are better than human-generated ones
Is Trump sicker than his doctors are saying? His treatment regimen raises questions
The big lesson from South Korea’s coronavirus response
The Apple-Google contact tracing tool gets a beta release and a new risk level feature
The Wisconsin Supreme Court’s conservative majority strikes down state stay-home order