The US has reached a grim milestone: 100,000 coronavirus deaths 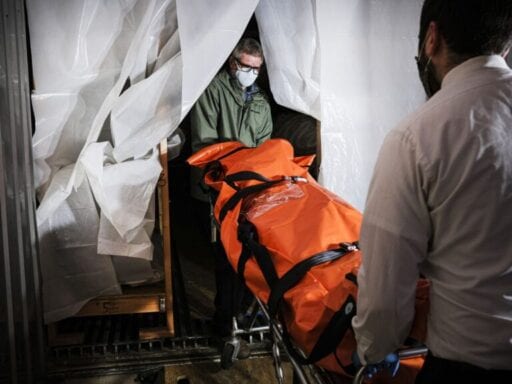 Share
Loading...
The body of a coronavirus victim is transported to a refrigerated container at a funeral home in Queens, New York, on April 29. | Spencer Platt/Getty Images

The official toll, almost certainly an undercount, is the highest in the world.

Officially, 100,000 Americans and counting have now died from the novel coronavirus, another unfortunate marker in the pandemic.

In the three months since the first reports of a US Covid-19 death on February 29 in Washington state, the death toll has reached six figures, according to the New York Times’s count. An unprecedented nationwide lockdown, with almost every state issuing a stay-at-home order and all of them placing restrictions on public activities, could only do so much to slow the virus’s spread (although earlier action likely could have saved more lives).

The coronavirus now looks like it will soon claim more lives in the US than the influenza outbreaks of the 1950s and ’60s that resulted in more than 100,000 deaths — the worst pandemics in modern history, behind only the 1918 flu that killed about 675,000 Americans.

Going by raw totals, more people have died in America from the coronavirus than in any other country in the world. Even adjusting for population, the US has one of the highest rates in deaths per million people, ranking behind only the hardest-hit countries in Europe.

The US may have been particularly vulnerable to Covid-19 because of high rates of chronic health conditions, which increase the coronavirus’s lethality, and the disease’s presence in nursing homes populated by seniors who are more at risk of a serious case or death if they get infected. The New York Times reported in mid-May that one-third of confirmed Covid-19 deaths were nursing home residents or workers. Policies like one in New York that directed people diagnosed with the coronavirus to nursing homes, possibly seeding more outbreaks and leading to more deaths, have come under scrutiny as the fatality figures increase.

The official tallies — in the US and around the world — are also almost certainly undercounts. In April, autopsy records revealed that the first official Covid-19-related death occured on February 6, but was not reported at the time. The Washington Post, in partnership with researchers from the Yale School of Public Health, estimated in late April that 15,400 more Americans died between March 1 and April 4 than ordinarily would have been expected, a substantially higher number than the 8,128 coronavirus deaths that were reported over that time by US government agencies.

Not all of those excess deaths can be blamed on Covid-19. But experts believe many of them are uncounted casualties of the virus.

It is no mystery why more people have died during the coronavirus pandemic than the government figures indicate. The officially reported number of Covid-19 deaths generally comes from hospitals. People who die at home may not be counted if they are never tested for the coronavirus. Instead, they may have a pulmonary embolism or heart attack listed as their cause of death, even if Covid-19 was the catalyst for their passing.

Whichever way you count it, the coronavirus’s toll has been devastating. And recent research indicates that it could have been at least partially avoided. Columbia University researchers projected that if lockdowns had taken effect a week earlier than they did in reality, as many as 36,000 fewer people might have died of Covid-19.

President Donald Trump’s administration and many state officials were reluctant to order the lockdowns, however, fearing the economic consequences; the country also had a more limited understanding of the virus’s spread because of early problems with tests sent out by the federal government.

The US coronavirus response has been defined by its missteps. And Americans are still paying the price for those failures.

Biden’s sweeping immigration bill, explained
Trump just picked Judge Brett Kavanaugh to be his Supreme Court nominee
Trump met with refugees and seemed to learn about major humanitarian crises for the first time
America is still failing on coronavirus testing
In Sharp Objects’ “Closer,” women’s stories don’t belong to them
The US needs more urgency on developing a coronavirus vaccine