The US intel chief just said Russian interference is “continuing” 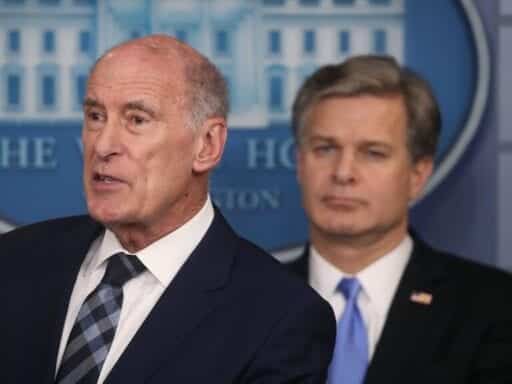 The White House paraded out top law enforcement and intelligence officials at Thursday’s press briefing with a strong message: Russian attempts to interfere in the 2018 elections are real and ongoing.

Their message was in stark contrast to what President Donald Trump has been willing to say publicly about the issue. Trump continues to attack special counsel Robert Mueller’s investigation as a “witch hunt,” despite the compiled evidence about Russia hacking the Democrats and the propaganda war on social media platforms during the 2016 election. He has acknowledged Russian interference in that election, though he often adds the caveat that “other people” could also be involved.

“Our focus here today is simply to tell the American people we acknowledge the threat. It is real. It is continuing. And we’re doing everything we can to have a legitimate election that the American people can have trust in,” Director of National Intelligence Dan Coats said at Thursday’s briefing.

“In addition to that, it goes beyond the elections,” Coats continued, “It goes to Russia’s intent to undermine our democratic values, drive a wedge between our allies, and do a number of other nefarious things.”

Director of National Intelligence Dan Coats: ‘We acknowledge the threat. It is real. It is continuing.” pic.twitter.com/gECTt5PSFd

“This threat is not going away. As I have said consistently, Russia attempted to interfere in the last election and continues to engage in malign influence operations to this day,” Wray told reporters.

What we know about Russian attempts to interfere so far

The unannounced briefing came the same week that Facebook announced it had removed some two dozen pages and accounts for what it called “inauthentic behavior.” Facebook wouldn’t say for sure that the campaigns were linked to Russia, but the pages and accounts promoted divisive social issues — many intended to appeal to progressives — similar to the Russian influence campaign during the 2016 election.

The Daily Beast also reported on evidence that Russian hackers were trying to hack Sen. Claire McCaskill (D-MO), who’s in a tight midterm race to retain her seat in a state that Trump won. McCaskill later confirmed the unsuccessful attempt. A Microsoft official said last month that the company had detected three attacks against candidates all facing election in the 2018 midterms, calling them “interesting targets from an espionage standpoint.”

But on Thursday, the officials said they did not believe Russian efforts were as intense this year as they were in 2016 — though they cautioned the threat is persistent.

“As I have said consistently, Russia attempted to interfere with the last election and continues to engage in maligned influence operations to this day,” FBI Director Christopher Wray says https://t.co/h9Iwrm6o3L pic.twitter.com/gHsOjr16kW

Bolton also read from part of a letter, addressed to Senate Democrats, that assures them the White House is taking the threat seriously and that “President Trump has not and will not tolerate interference in America’s system of representative government.”

But despite the harsh words, officials offered few details about how they’re actually defending the US from Russian threats. Wray did not talk about any specific investigation, though he mentioned that officials were examining “illegal campaign financing” and working with social media platforms to counter information warfare. Secretary Nielsen said DHS was working with local and state governments to ensure the integrity of election infrastructure. And Nakasone declined to say whether the US was engaged in any offensive operations to counter the threats.

Trump’s officials have been clear about Russian interference. He hasn’t.

The unified, unambiguous message from the administration made Trump’s absence even more noticeable — especially as a second meeting with Putin is still reportedly in the works.

The press conference came almost a week after the president led his first meeting to discuss safeguarding the 2018 elections and punishing Russia for its attempts to interfere. “The president has made it clear that his administration will not tolerate foreign interference in our elections from any nation-state or other dangerous actor,” White House press secretary Sarah Sanders said at the start of Thursday’s press briefing.

But Trump hasn’t exactly been unequivocal, as his July 16 Helsinki press conference with Russian President Vladimir Putin showed. “So I have great confidence in my intelligence people,” Trump said at the press conference last month, “but I will tell you that President Putin was extremely strong and powerful in his denial today.”

Last week, Trump tweeted that if Russia did interfere, it would be “pushing very hard for Democrats.” When reporters pressed officials on this, they responded by focusing on 2018 and reiterating that the president is taking this seriously.

“The president has specifically directed us to make the matter of election meddling and securing our election process a top priority,” Coats said to reporters.

When asked whether the US should do more to punish Russia, possibly through additional sanctions, Coats said he would “support any efforts that we can collectively put together to send the signal to Russia that there is a price to pay for what they’re doing.”

“And if we want to have any kind of relationship whatsoever in dealing with things of mutual interest, they have to stop doing what they’re doing.”

.@edokeefe: Would you support legislation imposing sanctions on Russia now that you’re saying they have…interfered?
DNI Coats: …I would support any efforts that we can collectively put together to send the signal to Russia that there is a price to pay for what they’re doing. pic.twitter.com/0K454LbgLx