The US, Japan, and Australia let the whole world down at the UN climate talks 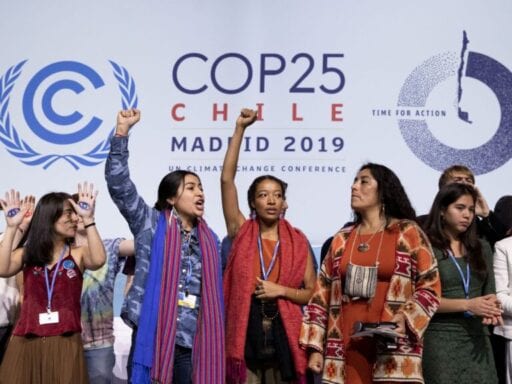 The wealthy countries that are some of the biggest emitters continue to thwart agreements on critical issues.

In September, Hurricane Dorian rapidly intensified and stalled over the Bahamas, striking at Category 5 strength. The storm, which scientists said was worse because of global warming, killed at least 70 people and caused $3.4 billion in damages.

Dorian was one of the most tragic examples in 2019 of how climate change has a disproportionate impact on poor countries that have contributed so little to the problem. Bahamas is responsible for just 0.02 percent of global emissions, and yet it keeps falling victim to extreme weather, and slower moving threats like sea-level rise.

Along with other island countries like Vanuatu and Tuvalu, the Bahamas is demanding that wealthier countries with a longer record of greenhouse gas emissions stop blocking programs to help defray the costs of climate losses, whether that’s through aid, investment, or direct transfers of money. The argument is simple: Countries such as the United States, Canada, Japan, Saudi Arabia, and Australia, whose economies benefited greatly from burning fossil fuels, are morally obligated help less developed, more vulnerable countries cope.

This was one of the core issues at the highly fraught United Nations climate talks in Madrid, Spain known as COP25, that wrapped up on Sunday. The negotiations ultimately allocated a paltry amount of money for climate-related losses and left critical questions unresolved on who will pay for damages, according to a coalition of 44 island countries known as the Alliance of Small Island States (AOSIS):

“Climate action is not a wish. It is a matter of survival and it must be funded. We welcome the near US$90 million pledged to the Adaptation Fund at this meeting. But, adapting to secure 1.5 costs vastly more.” #COP25 #AOSISClosing

It’s a frustrating outcome for a high-stakes issue that affects the very survival of some countries, especially when scientists are warning that the window to limit climate change is rapidly narrowing.

Activists and some delegations said that the solution is simple. “Those responsible for the crisis must pay up,” said Harjeet Singh, the climate lead for the global activist group ActionAid. “This COP has failed the people and the planet.”

But some of the countries that would end up paying — namely the US— pushed back at the meeting, working to limit their expectations to contribute to international climate financing and assistance.

This back and forth can seem like petty bickering, but the terms under debate can have far-reaching impacts on how countries develop their economies, how they trade with each other, and how they survive a world under warmer temperatures. That’s why it’s important to understand the language being debated and why the meager outcome of COP25 is so alarming.

The problems are that every country didn’t contribute equally to the problem, everyone isn’t equally capable of curbing emissions, and none are equally vulnerable to climate change. The Paris agreement set the finish line, but every country has a different starting line.

The UN attempted to address these imbalances with the concept of common but differentiated responsibilities, dividing up countries by wealth and emissions to target specific language on responsibilities and actions.

For example, under the 2015 Paris climate agreement, countries are allowed to set up rules for trading carbon credits to help meet their goals. These rules, governed under a section of the accord known as Article 6, dominated the COP25 talks. Ideally, they would be a way for wealthier countries to pay for projects like land restoration and switching to cleaner fuels in developing countries while taking on more ambitious greenhouse gas reduction goals.

But without proper rules, it could end up as a way for richer countries to simply buy their way out of reducing their own emissions, and if the credits aren’t designed right, they may not lead to the reductions that they promised. That’s why equity concerns are embedded in any international carbon trading scheme.

Carlos Manuel Rodríguez, Costa Rica’s minister for energy and environment, specifically blamed the United States, Brazil, and Australia for blocking progress on Article 6 by insisting on language unacceptable to most countries.

The issue of loss and damage, meanwhile, gets directly to the core of injustices of climate change. In 2013, parties to the UN’s climate negotiation framework, the UNFCCC, established Warsaw International Mechanism for Loss and Damage associated with Climate Change Impacts, also called WIM in UN-speak.

As the name suggests, it’s a way for countries to work together to help deal with the losses and damages that are occurring from the changes in the climate that are already underway, like rising oceans and weather becoming more extreme. This mechanism actually predates the Paris climate agreement, but the rules on how to fund and govern the program remain up in the air and were up for review at COP25.

So it’s not surprising that securing funding for a loss and damage mechanism was a top priority for the countries facing some of the highest climate risks: small island states, least-developed countries, African nations.

“Loss and damage is an existential issue for us,” said Omar Figueroa, Belize’s environment minister. “We need clear and predictable finance that we can access to really compensate for the loss and damage that so many of our sister nations are feeling.”

But wealthier countries were reluctant to sign onto language that would commit them to fund the program and instead agreed in broad strokes to study the issue. The United States in particular tried to introduce language that would put the WIM solely within the purview of the Paris agreement and not the larger UNFCCC. Since the US is withdrawing from the Paris agreement, but not the UNFCCC, this would draw a line around the program to exclude the US from contributing to prevent the US from being asked to chip in.

Ian Fry, a delegate from Tuvalu, called out the United States without mentioning it by name for trying to introduce this provision. “Ironically, or strategically, this party will not be a party to the Paris agreement in 12 months time,” he said during the closing session of COP25. “This means if they get their way with the governance of the WIM, they will wash their hands or any actions to assist countries that have been affected by the impacts of climate change. This is an absolute tragedy and a travesty.”

For some wealthier countries, they worry that they could be liable for climate damages, and want to indemnify themselves, but many of the countries most vulnerable to climate change say this is a non-starter. Instead, wealthy countries would prefer to provide disaster loss and damage money as charity on their own terms and not bound by any international rules.

The US delegation did not respond to requests for comment.

There will likely be few ways to move forward on an international climate action without an agreement on how to fund loss and damage, but with countries so far apart on the issue, there may not be any progress anytime soon, and the topic will be on the table again in the next rounds of climate talks.

All the while, some wealthy countries are continuing to make the problem worse. Greenhouse gas emissions in the United States are on the rise, and Japan noted at COP25 that the country is planning to build more coal-fired power plants and export coal generators.

“In Japan, coal power is not seen as problematic as the international community does,” Japan Environment Minister Shinjiro Koizumi said at a press conference at COP25. “There is a plan to build coal-fired plants in Japan, but with that fact in mind I have some complex feelings about attending COP25.”

With all the consternation around the UN negotiation process, one might wonder if there is a better way to do this. These ongoing climate negotiations are governed by consensus, which means everyone has to agree.

One would have a hard time even getting 197 countries to agree that the sky is blue without a multi-day summit, a dozen drafts of the resolution, and one country threatening to derail everything because they believe that turquoise should count as blue in some circumstances. On climate change, this process often results in the most tepid and toothless actions.

At a time when scientists are warning that the world may have as little as a decade to get on track for the goals of the Paris climate agreement to limit warming to less than 2 degrees Celsius this century, if not 1.5 degrees Celsius, the byzantine UN process for negotiating a solution to climate change seems unbearably slow and inadequate.

If you live the #ClimateEmergency in a very real way almost on a daily basis, you’d understand why we in the Global South and the vulnerable countries are tremendously disappointed with #COP25. If you want to sugarcoat that, it’s up to you. Tired of this dishonest optimism.

But the key issue is that while everyone needs to act, there are few levers to compel countries to do so. Ultimately, international actions on climate change have to be self-driven and voluntary within countries. That’s why everything in the talks is framed in terms of “ambition” rather than “obligation.” There are lots of carrots, but very few sticks.

That the world has gotten this far at all is a minor miracle, and the UNFCCC remains the only truly global framework to tackle climate change. But global emissions are still growing, the commitments to reduce them right now are nowhere near enough, and a small handful of countries are blocking more coordinated action.

At the same time, the biggest gains in fighting climate change are happening unilaterally outside the international negotiation process. The European Union last week introduced its European Green Deal that aims to zero out the EU’s contributions to climate change by midcentury. A key provision in the proposal is a border adjustment carbon tax that would add a tariff to imported goods from countries that are not as ambitious in limiting climate change. It’s an example of how one large, powerful bloc can nudge other countries to act.

So what’s needed right now is more countries to step up their own targets for curbing emissions, but also to be more willing to pressure others, with the largest pressure coming from the largest economies.

And there is no way around the money problem. Right now, developing countries are increasingly becoming larger sources of greenhouse gases and are also becoming more vulnerable to climate-linked disasters. Any meaningful attempt to limit climate change will have to bring these countries on board too, which will require a trans-national wealth transfer in some form. It will be especially tricky to get cajole countries that are large emitters, but are still developing, like India and China.

While negotiators didn’t finish what they had hoped to at COP25, several delegates said that they did move closer to an accord on the remaining issues. They will have more chances to resolve their differences next year in Bonn, Germany, and in Glasgow, United Kingdom. But they won’t have another chance at this moment, and time is running out.

Former PA governor calls out Trump administration on safe injection sites: “come and arrest me”
Trump’s spent years touting the stock market. At the RNC, he just … didn’t.
7 big cases the Supreme Court will hear in its new term, explained
SNL brings back Alec Baldwin’s Donald Trump to give the Covid-19 graduation speech no one wanted
6 things the Federal Reserve can still do to fight the recession
Selfie face distortion is driving people to get nose jobs