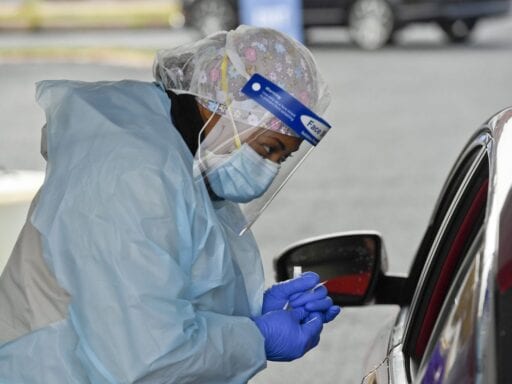 Share
Loading...
A nurse in Pennsylvania administers a Covid-19 test at a drive through facility. | Ben Hasty/MediaNews Group/Reading Eagle/Getty Images

There were about 10,000 more new cases Friday than the previous same-day high on July 16.

The United States broke its record for the highest number of confirmed coronavirus cases reported in a single day on Friday, an alarming sign that what some epidemiologists are calling a “third wave” of infections is spreading at breakneck speed as winter approaches.

According to the New York Times, by the end of the day on Friday at least 85,085 cases were reported in states across the country — about 10,000 cases more than the previous same-day high on July 16.

Public health experts had long warned that uneven compliance with social distancing guidelines, inadequate contact tracing programs, and premature reopenings of indoor venues were creating conditions for a resurgence of virus transmission after its summer peak, and that is what appears to be happening now.

The new case numbers also show that the geographic spread is wider than during past spikes. According to an internal report produced on Thursday for officials at the Department of Health and Human Services obtained by the Washington Post, more than 170 counties across 36 states have been designated rapidly rising hotspots. And 24 states have broken single-day records of new cases in the past two weeks, the Post reports.

Also concerning is that in the past month there has been a 40 percent rise in the number of people hospitalized for Covid-19 infections. Deaths have not surged so far, but epidemiologists have pointed out that there can be a significant time lag between a surge in cases and deaths tied to that surge.

“Today’s cases represent infections that probably happened a week or two ago,” Boston University epidemiologist Eleanor Murray told Vox’s Dylan Scott in July. “Today’s deaths represent cases that were diagnosed possibly up to a month ago, so infections that were up to six weeks ago or more.”

Saturday, President Donald Trump downplayed the record in new reported cases on Twitter, and incorrectly claimed that cases were up only because testing ability is up.

But public health experts have pointed to state-level policies on distancing and contact-tracing as a key driver of the current uptick. Moreover, the high rates at which coronavirus tests are coming back positive in many states — a key data point for estimating the true spread of the virus — and the surge in hospitalizations are signs that the new wave is not just a function of testing capacity. As Vox’s German Lopez has explained, a high positivity rate actually suggests that not enough tests are being done to track and contain spread in a given area.

Murray, the epidemiologist at Boston University, told the Washington Post that the wide geographic range of the new wave will make it difficult to move health care workers to hot spots. Previous spikes were concentrated in certain communities, allowing medical professionals from less affected areas to be moved to deal with outbreaks. But the breadth of the current outbreak could tax US health care capacity in a manner that has not been seen before.

And Murray also pointed out that this wave is more dangerous that the two that preceded it because it started from a higher point of infections.

“We are starting this wave much higher than either of the previous waves,” she told the Post. “And it will simply keep going up until people and officials decide to do something about it.”

Experts have warned about a third wave for a while

Medical professionals, epidemiologists and many public health officials have long pointed out the risk of a third wave.

As Vox’s German Lopez wrote in early October, experts warned that a third wave looked likely in light of the fact that the virus was never really suppressed nationally, and that premature reopening, encouraged most aggressively by Trump and Republican governors, would simply accelerate its spread:

Consider Florida. Last month, the state reopened bars and, more recently, restaurants, despite the high risk of these indoor spaces. After Florida previously opened bars, in June, experts said the establishments were largely to blame for the state’s massive Covid-19 outbreak in the summer. As Florida reopens now, it has roughly two to three times the number of Covid-19 cases that it had in early June, and its high test positivity rate suggests it’s still likely missing a lot of cases. The state is fanning its flames while its most recent fire is nowhere near extinguished.

This is, in effect, what much of the country is doing now as it rushes to reopens schools, particularly colleges and universities, and risky indoor spaces. Coupled with recent Labor Day celebrations, experts worry that’s already leading to a new increase in Covid-19 cases.

Experts have pointed out that Trump’s persistent agenda to downplay the dangers of the virus — and his suggestions that the news of a third wave is a media conspiracy designed to throw the election in Democrats’ favor — could intensify the problem as the virus is made into an increasingly partisan issue. The president has repeatedly failed to take responsibly for the US’ troubled pandemic response, including at the second presidential debate. He has instead blamed China and Democrats for the country’s problems, while leaving it to individual states to create plans for lower the rate of infection.

Some states have had more success in reducing infection than others, but none has managed to eliminate spread altogether. And more worrying still is the fact that cold weather and flu season have yet to fully settle in many states as winter approaches.

The good news is that we know how to counteract further spread.

“None of the ideas to prevent all of this are shocking or new,” Lopez recently wrote. “They’re all things people have heard before: More testing and contact tracing to isolate people who are infected, get their close contacts to quarantine, and deploy broader restrictions as necessary. More masking, including mandates in the 17 states that don’t have one. More careful, phased reopenings. More social distancing.”

Jim Jordan’s allies are questioning the premise of the Ohio State sexual abuse allegations
Trump responded to Obama’s criticism at the DNC by pushing a baseless conspiracy theory
Civil rights icon Rev. Joseph Lowery has died
4 reasons state plans to open up may backfire — and soon
The Trump administration just backed down on its attempt to kick out foreign students
Emirates flight from Dubai to JFK: how many are actually sick?