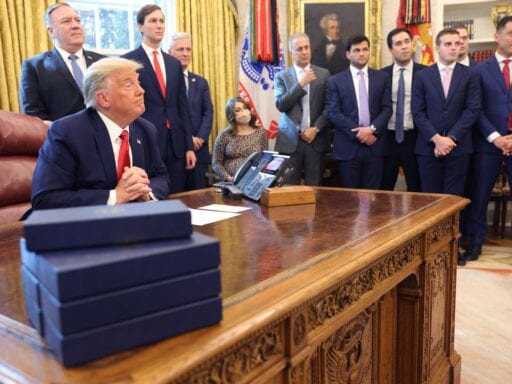 Share
Loading...
President Donald Trump speaks about a Sudan-Israel peace agreement in the Oval Office on October 23, 2020, in Washington, DC. He announced that Sudan will start to normalize ties with Israel. | Win McNamee/Getty Images

At its core, it looks like the deal is really a trade where the US gives Sudan financial help in exchange for recognizing Israel.

President Donald Trump announced Friday that Sudan has become the third country to normalize relations with Israel during the Trump administration, underscoring how the president’s diplomatic efforts in the Middle East may prove to be the most significant foreign policy achievement of his first term.

Trump, along with the leaders of Israel and Sudan, proclaimed a new agreement during a Friday call.

“The state of Israel and the Republic of Sudan have agreed to make peace,” Trump told reporters in the Oval Office. Israeli Prime Minister Benjamin Netanyahu praised Trump on the phone for the outcome, saying “We are expanding the circle of peace so rapidly with your leadership.” Trump responded: “There are many, many more coming.”

A statement by the nation’s three leaders released by the White House provided more details. “The leaders agreed to the normalization of relations between Sudan and Israel and to end the state of belligerence between their nations,” it reads. In return, “The United States will take steps to restore Sudan’s sovereign immunity and to engage its international partners to reduce Sudan’s debt burdens.”

Furthermore, “The United States and Israel also committed to working with their partners to support the people of Sudan in strengthening their democracy, improving food security, countering terrorism and extremism, and tapping into their economic potential.”

At its core, then, the deal looks like a trade where the US and Israel give Sudan financial support in exchange for diplomatic normalization.

The announcement follows Trump administration-brokered deals between Israel and the United Arab Emirates in August and Bahrain last month. Before that, the last peace deal Israel struck with an Arab country was with Jordan in 1994 (it signed one with Egypt in 1979).

But the deal with Sudan is arguably more significant. The UAE and Bahrain weren’t at war with Israel when they signed their agreements; Sudan and Israel were. That means while the first two pacts were normalization deals, this one with Sudan could potentially be described more accurately as a peace deal.

From 3 NO’s to 3 YES’s:
In 1967, the Arab world infamously declared in Sudan’s capital no recognition, no negotiation, and no peace with Israel. Today, Sudan joins the UAE and Bahrain as the 3rd Arab country to make peace with Israel in 2020.

It’s yet another win for Trump’s foreign policy, providing him with good news ahead of a bitter reelection fight.

How a Sudan-Israel deal came to be possible

It took a bit of maneuvering to make this agreement happen.

On Wednesday, a joint US-Israeli delegation traveled to Sudan for talks with the government. Two days later, Trump removed the Arab-led North African nation from America’s state sponsors of terrorism list. It’s a move he promised to make once the country paid $335 million to American victims of terror for the country’s harboring of Osama bin Laden in the 1990s.

GREAT news! New government of Sudan, which is making great progress, agreed to pay $335 MILLION to U.S. terror victims and families. Once deposited, I will lift Sudan from the State Sponsors of Terrorism list. At long last, JUSTICE for the American people and BIG step for Sudan!

The UAE also played a role in the negotiations, as Sudan asked the country — and the US — for billions in economic aid as part of signing this deal. That makes sense, as the country is desperately in need of cash. Whether the US and UAE start funneling money into Sudan remains to be seen.

A political earthquake in Sudan also made the announcement possible. A protest movement kicked Sudan’s Islamist leaders out of power last year, ushering in a new military-led government that wants to end its global pariah status. Making amends with the US and saying it is no longer hostile to Israel is one way to do just that.

“The US-Israel deal promises them the international recognition they crave without the inconvenience of democracy,” Alex de Waal, an expert on Sudanese politics, wrote for BBC News earlier this month.

And, more broadly, regional politics in the greater Middle East have changed dramatically in recent years.

Whereas the Israeli-Palestinian conflict once served as a major axis around which Middle East and Arab-government politics rotated, with many countries aligned with the Palestinians against Israel, that’s now changed. What animates the foreign policies of many Middle Eastern countries these days is the Arab-Israel standoff with Iran — which some have dubbed a “cold war.”

With less need to bash Israel and back Palestine, Sudan had more freedom to strike the deal.

For Israel and for Trump, that works just fine.

The Philadelphia police shooting of Walter Wallace Jr., explained
Live results for 2020’s marijuana legalization ballot measures
How to do everything, by the Highlight
The seat of American democracy looks like a city under occupation
Shia LaBeouf plays his own father in Honey Boy. He’s phenomenal.
Job ads on Facebook discriminated against women and older workers, EEOC says