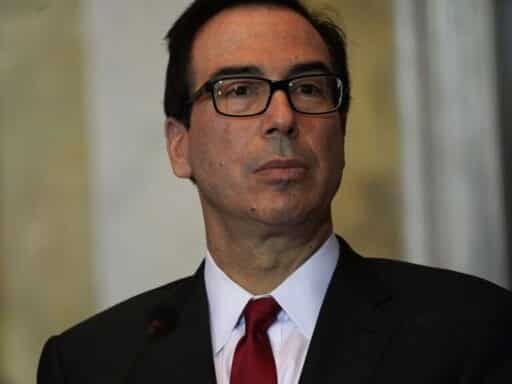 Treasury Secretary Steven Mnuchin withdrew from a big conference in Saudi Arabia. That won’t change much.

Treasury Secretary Steven Mnuchin just dropped out of a major conference in Saudi Arabia. It’s the first real rebuke of Riyadh by the Trump administration over the likely murder of journalist and dissident Jamal Khashoggi — even if it’s a small one.

On Thursday morning, Mnuchin met with President Donald Trump and Secretary of State Mike Pompeo. It seems that Mnuchin’s participation in Saudi Arabia’s Future Investment Initiative, nicknamed the “Davos in the Desert,” came up, since shortly after, Mnuchin tweeted that he would not be attending.

That makes sense, as top business leaders from Wall Street to Silicon Valley along with media organizations have withdrawn from the gathering, a three-day conference starting on October 23, in protest over the past two weeks.

Mnuchin, however, said for about a week that he still planned to attend because the conference included sessions on how to curb terrorist financing, an issue that is important to the Trump administration.

But in the midst of more news about what may have happened to Khashoggi — including possibly being beaten, drugged, murdered, and posthumously dismembered — and mounting pressure from US lawmakers, Mnuchin decided to no longer attend the Saudi showpiece.

Just met with @realDonaldTrump and @SecPompeo and we have decided, I will not be participating in the Future Investment Initiative summit in Saudi Arabia.

Khashoggi was a prominent Saudi dissident and journalist who wrote for the Washington Post and lived in the United States. He entered the Saudi consulate in Istanbul on October 2 to receive some paperwork for his imminent marriage, but he never came out. And while the world has condemned his disappearance, the US has remained quite docile.

So Mnuchin’s withdrawal is a big deal, if for no other reason than the US has finally imposed some cost on Saudi Arabia for its likely responsibility in Khashoggi’s disappearance. But it’s unlikely the US will do much more to push back on Riyadh.

Pompeo on Thursday told reporters that the administration will give Saudi Arabia a few more days to conduct a probe into what happened to Khashoggi. It’s doubtful that the investigation will be an impartial one, or that the Saudi Crown Prince Mohammed bin Salman — who US intelligence says knew about the Khashoggi plan — will be held responsible.

That’s all well and good for the US, which has shown no real appetite for imposing huge costs on Riyadh. Trump has repeatedly said he doesn’t want to take any actions that could imperil a litany of arms sales to Riyadh that could total $110 billion. What’s more, Trump has noted that Khashoggi was a US resident, but not citizen, therefore suggesting that he didn’t merit a stern response from America.

The administration, then, will probably try to portray Mnuchin’s withdrawal from the Saudi conference as a sign that they’re taking the Khashoggi situation seriously. But that may be all it is.