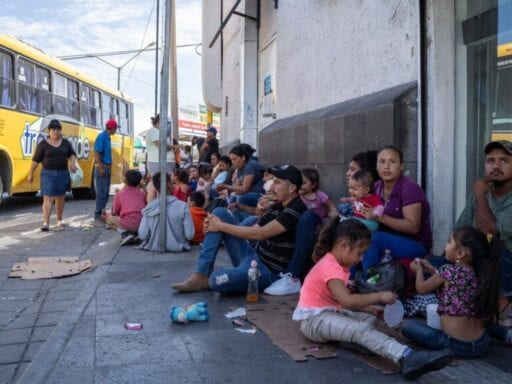 Share
Loading...
Migrants, mostly from Mexico, are pictured sitting on the ground waiting near the Paso del Norte Bridge at the Mexico-US border, in Ciudad Juarez, Mexico, on September 12, 2019.  | Paul Ratje/AFP/Getty Images

It could be yet another barrier to obtaining asylum in the US.

The Trump administration signed an agreement Friday allowing it to require migrants who pass through El Salvador to seek asylum there rather than in the US, another potential hurdle for Central Americans arriving at the US southern border.

The White House has also ordered the Department of Homeland Security to secure a similar agreement with Honduras by October 1, Hamed Aleaziz of Buzzfeed News reported.

The agreement with El Salvador is one of many measures that the Trump administration has taken in recent months to make seeking asylum in the US more difficult, and in many cases almost impossible, for Central Americans. Most of the migrants arriving at the US southern border are coming from the Northern Triangle countries of Guatemala, Honduras, and El Salvador, where rampant crime, violence, and corruption is driving tens of thousands to flee.

The agreement means the US can return migrants seeking asylum because they fear persecution to El Salvador, which has the highest intentional homicide rate worldwide, in large part due to its 60,000 criminal gang members. A United Nations report also found that Salvadoran police have shown a pattern of carrying out extrajudicial killings.

Persecution by these gangs and has led many of its citizens to flee to the US: About 98,000 Salvadorans have been arrested at the southern border this fiscal year so far, more than half of whom are families, according US Customs and Border Protection.

Acting Department of Homeland Security Secretary Kevin McAleenan told reporters Friday that the agreement is primarily focused on helping El Salvador develop its asylum system, with the intention that migrants should first seek protection there. But he remained vague on the agreement’s exact provisions.

“The core of this agreement is … recognizing El Salvador’s development of its own asylum system and a commitment to help them build that capacity,” he said. “As we work together to target irregular migration flows through the region, that is one potential use of the agreement — that individuals crossing through El Salvador should be able to seek protections there.”

Under the agreement, the US will also invest in El Salvador and work on a way for about 200,000 Salvadorans who have lived in the US for about two decades with temporary legal immigration status to remain the country permanently, McAleenan and Chancellor of the El Salvador Ministry of Foreign Affairs Alexandra Hill told reporters.

The agreement is one of several measures the Trump administration has recently taken to discourage migration from Central America.

A rule recently reinstated by the Supreme Court prevents migrants from obtaining asylum if they passed through another country other than their own before arriving in the US. That means that asylum seekers from any country but Mexico are ineligible for asylum if they show up at the southern border.

The Trump administration is also sending migrants who line up at a port of entry or who are arrested when trying to cross the southern border back to Mexico to await decisions on their asylum claims. Under the policy, which is known as “Remain in Mexico,” the US has returned more than 42,000 migrants to Mexico as of September 1, according to US Customs and Border Protection.

And the administration in July vastly expanded its power to quickly deport migrants who have recently arrived, without offering them the opportunity to pursue their asylum claims before an immigration judge.

The agreement with El Salvador is “another layer of deflection of asylum seekers,” says Randy Capps, director of research for US programs at the Migration Policy Institute.

But in practice, it might prove difficult to prove that migrants passed through El Salvador, meaning that it would likely only be used on a small scale to remove migrants, Capps said. It is not clear whether Salvadoran citizens would be allowed to seek asylum in the US under the agreement.

A Trump administration rule already prevents migrants from obtaining asylum if they passed through another country other than their own before arriving in the US, a rule which has a much broader effect than the US’s agreement with El Salvador. That means that asylum seekers from any country but Mexico are ineligible for asylum if they show up at the southern border.

There are limited exceptions to the administration’s rule: those who apply for asylum in another country but are rejected may bring their claims in the US. Victims of human trafficking and migrants who traveled through countries that are not parties to certain international human rights agreements are also exempt. But for the most part, it effectively closes the door on seeking asylum at the southern border (though they are still eligible for other forms of protection).

The Supreme Court has allowed that rule to go into effect for now. But if the rule were to be struck down in an ongoing court case, the administration could use its new agreement with El Salvador as a means of continuing to turn away asylum seekers.

Capps said that the agreement may allow the US to target Cubans and Nicaraguans in particular, who usually pass through El Salvador on their way to the US southern border. The US must be able to cooperate with immigrants’ home countries in order to deport them, but Cuba and Nicaragua have not been willing to do so recently. Friday’s agreement would allow the administration to send them to El Salvador instead.

McAleenan did not specify when the agreement will go into effect.

Trump also claimed to have reached a similar agreement with Guatemala in July, but the text is not yet publicly available and it has yet to be ratified by its government. As part of the agreement, the US offered to expand and streamline the H-2A temporary agricultural visa program for Guatemalan citizens, promising to spur what Trump has described as a “new era of investment and growth.”

But the Guatemalan Constitutional Court has stopped the agreement in its tracks for now.

If the objective of the Salvadoran agreement is indeed to build up the country’s asylum system, it could be a long time before the agreement sees any results.

“It’s hard to build an asylum system,” Capps said. “We can fund it. But El Salvador is starting almost from scratch.”

How chain necklaces for men got sexy
The politics of the books we display behind us during video calls
The myth of the job-hopping, rootless millennial is just that — a myth
7 case studies that show how coronavirus spreads before you know you’re sick
Gordon Sondland is being called the next John Dean. Here’s why.
The Trump administration has started sending Brazilian asylum seekers back to Mexico