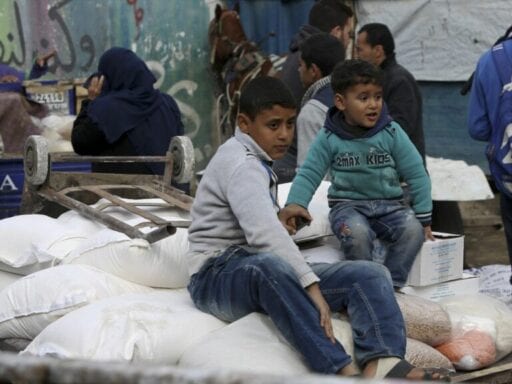 President Donald Trump is planning to cut all US funding to the United Nations program that administers aid to millions of Palestinian refugees, multiple outlets reported on Friday, alarming the international community and potentially putting the program itself at risk.

The cuts would come amid a general push from the Trump administration to reduce foreign aid and assistance to other countries, and are reportedly intended to pressure Palestinian politicians into making concessions ahead of a US-sponsored Middle East peace plan.

“What we’re seeing right now is a capricious move that has a very high risk of unsettling the region,” R. David Harden, a former official at the United States Agency for International Development who resigned in April, told the New York Times.

The United Nations Relief and Works Agency (UNRWA) was formed one year after the creation of the state of Israel in 1949. It provides health care, food, and education services to nearly 5 million Palestinian refugees spread out across the Middle East.

The US is the largest single donor to the UN agency, responsible for providing about $350 million each year — a quarter of its annual budget.

Trump administration officials have openly criticized the agency in recent days. “I think it is long overdue that we have taken steps to reduce funding,” US National Security Adviser John Bolton told Reuters last week, calling it a “failed mechanism.”

And Nikki Haley, the US ambassador to the United Nations, criticized US support of UNRWA on Tuesday. “First of all, you’re looking at the fact that, yes, there’s an endless number of refugees that continue to get assistance, but more importantly, the Palestinians continue to bash America,” she said, according to the Washington Post.

The US had already stated its intention to withhold $65 million in UNRWA funding back in January. But after a concerted push by Donald Trump’s son-in-law Jared Kushner, who is also a senior Middle East adviser, the State Department will now withhold the remaining amount, Harden said.

This news comes on top of other, separate funding cuts to Palestinians: The Trump administration announced last week that it will “divert” $200 million in aid to Palestinians living in Gaza and the West Bank, at least some of which would have been dispersed through the Palestinian Authority.

The cuts are apparently intended to pressure Palestinians to comply with aspects of Kushner’s Middle East peace proposal, which has yet to be unveiled. Palestinian Authority President Mahmoud Abbas said that Palestinians would not cooperate after Trump’s decision to move the US Embassy to Jerusalem last year.

But it’s unclear if cutting funding will have the desired effect, and experts don’t believe that the US-brokered Middle East peace plan has a high chance of succeeding.

“The rights of the Palestinian people are not for sale,” Hanan Ashrawi, a senior Palestinian official, told the New York Times last week in response to the news of the earlier cuts. “There is no glory in constantly bullying and punishing a people under occupation.”

Back in December 2017, Trump declared that he planned to move the US Embassy in Israel from Tel Aviv to Jerusalem, effectively recognizing that city as the capital of Israel and breaking with decades of established US policy.

The UN and the international community reacted with outrage to the announcement. Palestinians were angered too, and many said that this effectively killed any attempt at a US-brokered peace process. This annoyed Trump, who went on Twitter in January to complain about US funding to Palestinian refugees.

It’s not only Pakistan that we pay billions of dollars to for nothing, but also many other countries, and others. As an example, we pay the Palestinians HUNDRED OF MILLIONS OF DOLLARS a year and get no appreciation or respect. They don’t even want to negotiate a long overdue…

Also in January, Haley said that the US would cut funding to UNRWA unless Palestinians decided to come to the table and continue peace talks with Israel. ”We’re trying to move for a peace process, but if that doesn’t happen, the president is not going to continue to fund that situation,” Haley said.

On May 14, when the Jerusalem embassy move took place, Israeli soldiers clashed with Palestinians who were protesting along the border with Gaza, leaving more than 60 Palestinians dead.

Palestinians were protesting the ongoing humanitarian crisis in the Gaza Strip, which is suffering from an Israeli and Egyptian blockade, and demanding their right to return to lands in Israel that hundreds of thousands of Palestinians fled or were evicted from during the creation of the Jewish state.

As Miriam Berger writes for Vox, during Israel’s war for independence, which Palestinians call the Nakba, or catastrophe, at least 700,000 Palestinians were expelled or fled their homes. Today, their descendants remain refugees, and many still live in urban, slumlike refugee camps across the Middle East. According to the UN, “Socioeconomic conditions in the camps are generally poor, with high population density, cramped living conditions and inadequate basic infrastructure such as roads and sewers.”

In the months since the embassy move, US relations with the Palestinians have not improved — though Trump’s hardline approach has been popular with Israel’s ruling right-wing government. Israeli Prime Minister Benjamin Netanyahu has blamed the Palestinians for disrupting the peace process and heartily expressed his support for Washington’s decision to slash funding to the UN aid agency, though others in Israel — including some Israel Defense Forces officials — believe the decision will have severe and negative ramifications.

According to Foreign Policy, the decision to cut US funding to UNRWA was made earlier in the month at a meeting between Secretary of State Mike Pompeo and Kushner, and was intended to place pressure on Palestinian leadership:

Kushner contends that UNRWA’s assistance has built a culture of dependency among the Palestinians and that it helps preserve unrealistic expectations that they might one day return to the homes they left in the 1948 Arab-Israeli War.

He and Haley are gambling that the financial pressure will force the Palestinians to resume negotiations with Washington’s Middle East peace team, which Palestinian Authority President Mahmoud Abbas halted over Trump’s decision last year to move the U.S. Embassy in Israel to Jerusalem.

A US official told the Washington Post this week that the Trump administration will announce the coming cuts to UNRWA’s funding soon. Though other countries have promised to raise their allotted funding to help make up the shortfall, it’s unclear when or if that will actually happen.

Back in January, when the US first announced plans to withhold some funding to UNRWA, UN Secretary General António Guterres expressed concern about what would happen next.

”In my opinion, and an opinion that is shared by most international observers, including some Israeli ones, [UNRWA] is an important factor of stability,” he said. If the agency could not provide vital services to millions of Palestinian refugees, Guterres continued, it could create “a very, very serious problem.”