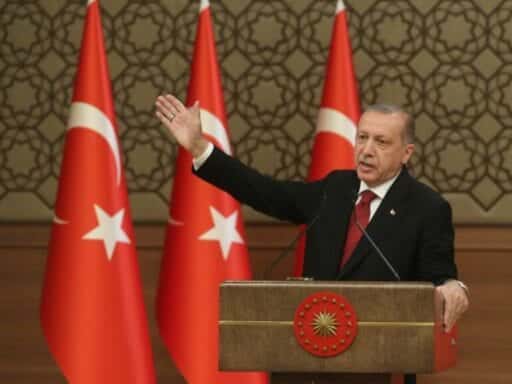 A battle over an American pastor is putting strain on Turkey’s economic troubles.

Turkey slapped hefty tariffs on US cars, alcohol, tobacco, and other products on Wednesday — the latest blow in an escalating economic and diplomatic fight with the United States.

Ankara’s retaliatory trade measures come after US President Donald Trump said Friday he would impose additional tariffs on Turkish aluminum and steel. And this trade spat with the US is exacerbating a brewing financial crisis in Turkey.

Turkey’s currency, the lira, plunged to a record low against the dollar on Tuesday, though it recovered a bit on Wednesday after Turkish president Recep Tayyip Erdogan announced the tariffs on US goods, and after Qatar announced that it would invest $15 billion in Turkey’s economy.

Tensions between the US and Turkey spiked recently due to a disagreement over the fate of North Carolina Pastor Andrew Brunson, a man whom Trump has referred to as a “great Christian.” Turkey imprisoned Brunson in October 2016, claiming he had ties to a group that Erdogan blames for the failed coup earlier that year.

Erdogan has remained defiant in the face of US pressure, promising to boycott iPhones and other foreign products and now adding massive tariffs on US products — 120 percent on cars and 140 percent on alcohol. And Trump, in his typical style, has shown no sign that he’s willing to back off.

But the risks are far greater for Turkey in this showdown — especially since Erdogan’s problems are much bigger than this feud with the US.

Erdogan’s increasingly authoritarian government and his economic mismanagement have fueled Turkey’s worsening economic situation. A crisis was on the horizon before Trump even got involved.

Erdogan won reelection in June 2018, consolidating his power and cementing his control of the Turkish state. But even amid that victory, there were clear signs of severe economic troubles to come.

The Turkish president was largely insulated from the economic woes during his election, in part because he’s fairly popular in Turkey and because he and his AKP party presided over strong economic growth in the previous decade. Erdogan, a populist leader, has pursued growth at all costs — which has involved a lot of borrowing and spending, including on infrastructure and massive construction projects.

A lot of that borrowing was done in dollars, and Turkey’s economy relied heavily on foreign investment. As the lira dips in value, it becomes harder for Turkish companies to pay back those loans, Amanda Sloat of the Brookings Institution explained on NPR on Wednesday.

Erdogan’s economic policies did fuel growth, so much so that the Turkish economy began to overheat, which caused inflation to increase. Most economists would say the solution to this would be to raise interest rates. But Erdogan has expanded his power over Turkey’s central bank, giving him more control over the country’s monetary policy — and Erdogan possesses a bizarre hatred of interest rates. (He once referred to them as “the mother and father of all evil.”)

Erdogan’s heterodox views and grip on power have added to foreign investors’ concerns about the state of Turkey’s economy, which means investors are bailing on the lira, fueling the currency’s depreciation and increasing Turkish companies’ debt.

But Trump’s move to impose additional tariffs on Turkey seems to have pushed the Turkish economy to the brink.

“It’s not like the United States caused this,” said Michael Klein, an international economics professor at the Fletcher School at Tufts and executive director at Econofact. “But there’s probably some element of the trade spat [signaling to] investors and Turkish residents that things were not going to get better.”

“Once this starts,” Klein continued, “it takes on a life of its own.”

What’s the deal with this American pastor — and how does he play into the current crisis?

Andrew Brunson is an American evangelical pastor who has been in detained in Turkey for nearly two years on charges that he’s tied to the Gülen movement, which the Turkish government considers a terrorist group. Erdogan blames the Gülen movement and its founder, Turkish cleric Fethullah Gülen, for inciting a coup against him in July 2016.

Gülen has lived in Pennsylvania since 1999, but Erdogan wants him returned to Turkey. He’s likely trying to use Brunson as leverage to get the US government to do so.

Meanwhile, Trump, along with Vice President Mike Pence, seem to have personally taken up the pastor’s cause. In late July, Trump announced that the US would impose sanctions on two of Turkey’s top officials in response to Brunson’s detainment.

The United States will impose large sanctions on Turkey for their long time detainment of Pastor Andrew Brunson, a great Christian, family man and wonderful human being. He is suffering greatly. This innocent man of faith should be released immediately!

The sanctions were more symbolic than anything else. But Trump escalated the situation last Friday when he raised tariffs on Turkey, imposing a 20 percent tax on aluminum and 50 percent tariff on steel.

On August 10, Trump tweeted about the tariffs and declared that the lira “slides rapidly downward against our very strong Dollar!” and indeed, the country’s currency immediately plunged after Trump ramped up the trade feud.

I have just authorized a doubling of Tariffs on Steel and Aluminum with respect to Turkey as their currency, the Turkish Lira, slides rapidly downward against our very strong Dollar! Aluminum will now be 20% and Steel 50%. Our relations with Turkey are not good at this time!

Erdogan, for his part, hasn’t wavered — as his latest round of tariffs proves. The Turkish president appears to be banking on the idea that Turkey is too vital a partner for the United States to lose.

“At a time when evil continues to lurk around the world, unilateral actions against Turkey by the United States, our ally of decades, will only serve to undermine American interests and security,” Erdogan wrote in a New York Times op-ed this weekend. “Before it is too late, Washington must give up the misguided notion that our relationship can be asymmetrical and come to terms with the fact that Turkey has alternatives.”

Turkey is indeed a key strategic partner and NATO ally, and has made recent moves toward Russia in the wake of US tensions. But Erdogan is not dealing with a typical US administration — he’s dealing with Trump, who’s proven to be unpredictable and often not amenable to the appeals of America’s allies.

Indeed, National Security Adviser John Bolton met with Turkey’s ambassador on Monday over the dispute and warned that the US wouldn’t budge until Brunson was released. And in the battle of two hardheaded leaders, Trump has a clear edge — his policies are likely to do more damage to Turkey than the other way around.

Aaron Stein, a Turkey expert with the Atlantic Council, a think tank in Washington, DC, said that the US’s actions have been relatively minor so far. But there’s no guarantee that they’ll stay that way. “They were teetering,” Stein said of Turkey’s economic crisis. “Trump just sort of blew on the candle.”

Trump is the “wrong president for our country”: Read Michelle Obama’s full speech
4 winners and 3 losers from the November Democratic debate
Trump faces a second impeachment
Why the debate over the legality of Andrew Yang’s $120,000 UBI pilot doesn’t really matter
How Biden could expand paid family leave to more Americans
Why protesters have been banging pots and pans outside their windows